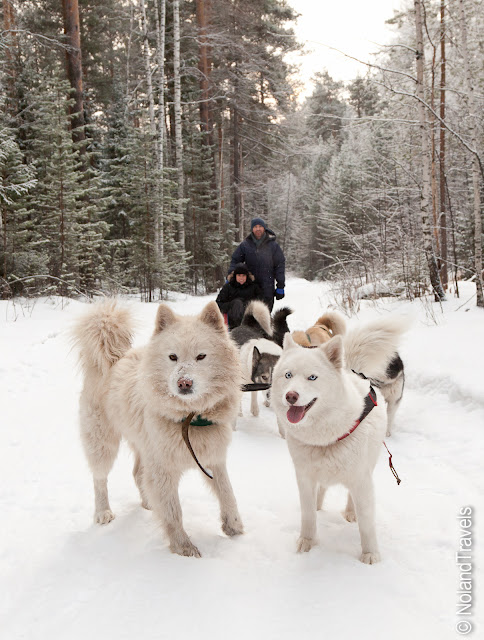 We've always wanted to go dog sledding so when this came up as an option for our included excursion we jumped at the chance.  Konstanine picked us up early and we headed out of the city to a snow dusted highway lined with snow covered trees where the forest of the Ural Mountains really took hold.  On the way we made one stop at a monument that marked the continental divide between Europe and Asia.  We played a little tug of war in front of the monument before learning about a marriage tradition that happens at the divide, prompted by a newlywed couple who drove up with white streamers flying and windows covered in best wishes messages. 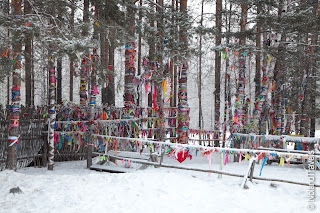 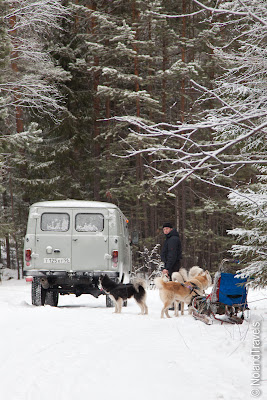 Couples come here to get photos and tie ribbons around the trees for luck.  There were flags everywhere and some in places that looked very hard to reach.  At first Konstantine was a little surprised to see them on a Thursday because traditionally weddings are on Friday, but then he realized tomorrow was Friday the 13th - maybe not the best wedding date...

Continuing on, we soon turned off the highway and found ourselves on snow-packed, unmarked roads (we're really not sure there was pavement under the snow…).  Konstantine even got himself confused on the unmarked roads and had to do a quick turn around before finally meeting up with a van in an empty snowy field.

We were introduced to the musher who was fully bearded and famous locally for being in the Guinness Book of World Records due to some of his treks across Siberia. He had a young assistant who didn't speak English who helped with the sled. When we arrived the dogs were running around in what I'll call their "warm ups" - you know, dogs running loose in an open field.

The introduction to sledding was simple and brief.  They helped us secure the camera bag, showed us where to sit and stand, how to apply the foot break, then taught us a couple commands we'd need.  "Haak", means go and "shhh" for stop.  He said for them to work you'd need to really put force into the pronunciation, like this, HHHAAAKKK".  Looking at us we repeated, "haakk".  He shook his head, no, "HHHHAAAAKKKK" he said very forcefully motioning to his stomach.  We did our best "coughing-up-a-hairball-haak" which he gave a positive nod to and we were ready to go.


The actual sled was only large enough for me to sit on and for Josh to stand at the back. We had 6 lovely huskies guiding the sled all with different personalities. A large fluffy white husky was the alpha male lead dog who peed on everything.  He was paired with a smaller, more reserved white husky with stunning blue eyes.  We think she was there to help keep the lead dog calm. There was an older dog at the rear, paired with a large caramel husky who probably needed to be far away from the lead dog. They provided the rear wheel drive.  In the middle was the young and "friendly" dog, Sarah, with one blue eye and one brown eye (shown below), paired with an average size/age dog who had gas! What a cast of dogs, now lets see if you can run! 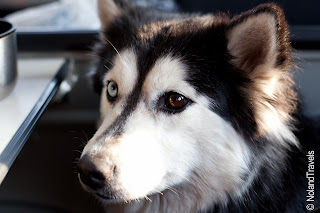 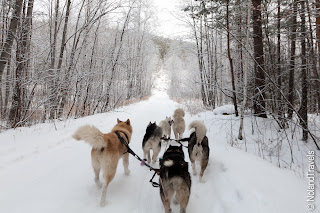 So, after a few last minute instructions, the musher untied the sled from a post.  Instantly the dogs knew what that meant and began jumping and howling in excitement.  The sled lunged forward as we started to move.  He hurriedly jogged to the van, as the dogs followed.  He jumped in the driver's seat and hit the gas and with the dogs faithfully following we were off and away!

As we cruised through the forest, I'm not sure the dogs ever really listened to us.  They are only trained to listen and follow their musher who was riding in an off road van in front, so they naturally followed along. For most of the journey the van was out of view which gave us the opportunity to really enjoy the experience of sledding through a winter forest.  I really want to say "winter wonderland" but it sounds too cheesy.  However, it really was absolutely peaceful and beautiful - so pristine and all covered in snow.

On one funny note, a couple of times the lead dog would turn around and look at Josh yelling commands, as if to say, "who do you think you are?  You aren't in charge here…"
We did have one near sled flip, as we rounded a corner we hit a small lip on the edge of the path, but fortunately Josh was able to brace us as we started to roll, keeping us upright until the ground leveled out again.  It all happened so fast but I thought I was about to face plant in the snow with the camera!  Whew, it was a close call but smooth sailing otherwise. 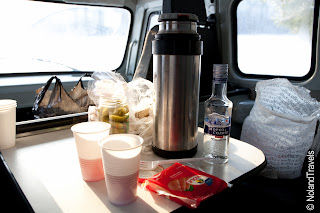 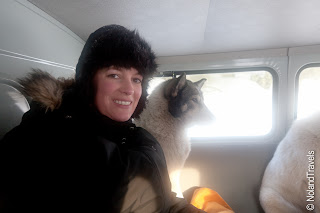 We sledded for about 7km into the forest and then stopped for lunch.  While he grilled our sausages for lunch, the musher suggested we climb a nearby hill to see some of the rock formations that make up the rich geology of the Ural Mountains.  I had had way too much juice and water that morning so venturing away in to the woods to find a ladies room suited me just fine!  I had a good laugh at the whole breezy experience - guys just have it way too easy! 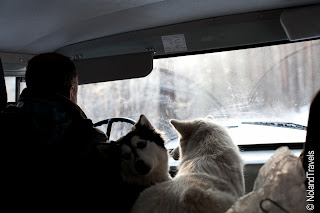 At the top of the hill was a large natural rock formation that dropped away on the other side. We took advantage of the snowy scene to get some fun pictures of ourselves.  Knowing that the musher was cooking our lunch we then headed back down the hill realizing this was the first time we had both seen powder snow.  The snow was sometimes knee deep and it was good fun to jump and whoosh down the side of the hill in the powdery snow.

Back at the bottom, the musher opened the van door for me so we could sit inside for lunch.  As I climbed in I was unexpectedly greeted by two of the dogs sitting inside on the bench being right at home!  After we all got in the musher pulled out the obligatory small plastic cups and a bottle of vodka, along with a small jar of pickles.  Good man! After downing the warming shot of vodka we tucked in to the flame-grilled sausages and pieces of cheese.  Delicious!  He even had dessert - small flaky wafers with chocolate layers!  It's sometimes simple meals like this that are some of our most memorable!  Sitting in a tiny van, surrounded by dogs, in a Siberian forest eating grilled sausages and drinking Vodka!

There wasn't any sledding back to the start, but we didn't need any more.  The experience was already amazing! On the van ride back two of the dogs crawled into the front seat to help the musher drive home which was fairly funny as you can see.  The older dog just napped with his head across my leg and one foot stuck out to brace himself for the bumpy ride back.  The dogs took a well earned nap and we zoned out after the Vodka and sausages and enjoyed a seriously priceless ride back.

To give you a better idea of the sledding experience, I put together this quick video.  I broke it down into multiple takes so you can see how little the dogs responded to our commands.

I'll leave you with a picture of us and our famous musher who's name I sadly can't remember.  See if you can spot the dogs in the photo... 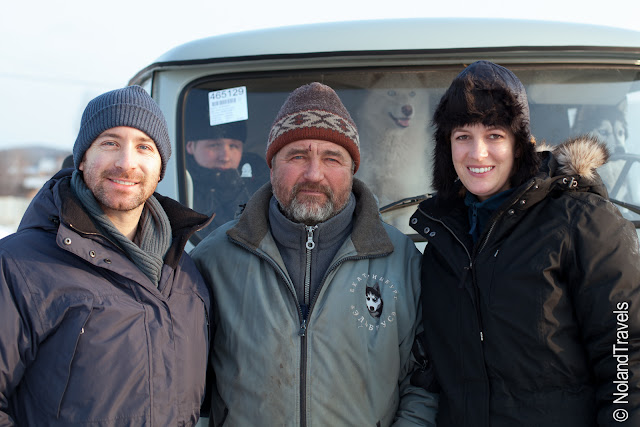