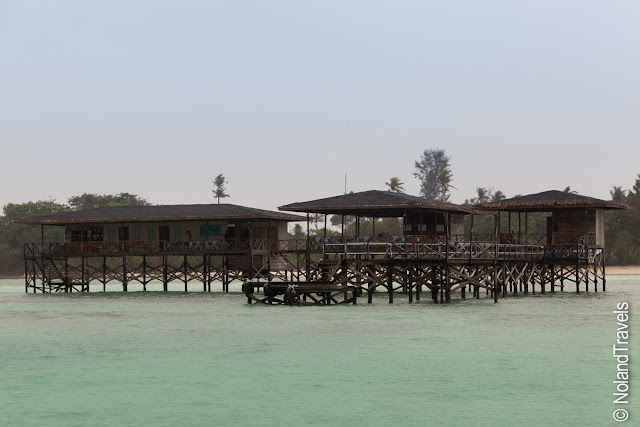 After 3 complete days of peaceful beach nothingness we both felt it was time to do something.  As much as we needed R&R we just aren't the lay-on-a-beach-for-a-week type.  Since Southeast Asia is renowned for diving we thought we'd give it a try again.  Steph had only ever really dived in the Red Sea, an experience that left her a little uneasy as they forgot to put the weltbelt on her and she kept floating away.  So after a discover scuba dive with Mantanani diving lodge, we decided to extend our stay long enough to get our PADI Open Water Certification.  I can officially say that both Steph and I are now certified divers! 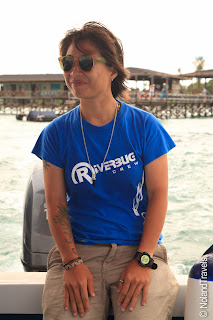 Our instructor was one cool lady named Jaclyn.  She was completely chilled out, patient and really helped both Steph and I get comfortable in the water allowing us to pass all of the tests and get our certification.  She was our age, with many years of varied diving experience under her belt - it was great to talk to her about some of the exciting, and some scary, experiences she's had while diving.  We felt we were in safe hands!  (Did you know your blood looks green at 70 meters below the surface?!)

Mantanani is actually a group of 2 islands.  We were staying on the main island and the smaller one is an uninhabited bird sanctuary.  The dive lodge, pictured at the top, which we'd be calling home during the 3 days of training was just off the coast of the small island.  We completed all of our maneuvers and skills mastery in the confined shallow waters of the lodge surrounded by a huge school of anchovies!  It was wicked - I even jumped off the dock in to the school to see what they would do.  They were the ones laughing as I only touched a couple of them before clunking to the bottom of the shallows!

One of the skills to master is to be able to take off your mask underwater, breathe through the regulator without it for a minute and then put it back on again underwater.  I was first to go and Steph and Jaclyn were right next to me to observe.  After breathing underwater with my eyes closed for a minute I put my mask back on and cleared the water.  When I opened my eyes the massive school of anchovies had closed in since we were still and formed a huge circle around the 3 of us.  What a sight!

The full dives were also good.  Off the coasts of both islands are large amounts of coral which we explored, full of a variety of sea life.  We saw a couple stingray along with loads of other fish of which we can't quite remember all of their names.  The corals were stunning as well - unlike anything we'd ever seen (I guess there IS a benefit to diving over just snorkeling...!)

Given the amount of coral reefs in the area, we weren't too surprised to see that the beach had a lot of broken coral in the sand.  But when we asked why the beach was littered with dead coral, we learned about a sad practice called fish bombing.  It's outlawed but hard to police, as you can imagine.  During our final dive, we heard one of these bombs go off while we were underwater - an unmistakeable explosion which startled us both!  We exchanged looks underwater and saw Jaclyn write a note on her underwater notepad, it said:  "Fish Bomb! 11:43am".  Any bombs heard are reported but again policing it is very difficult. 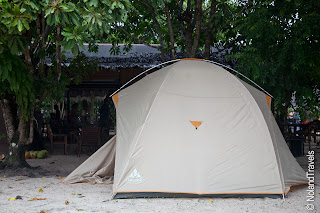 All the training and diving was actually quite exhausting.  We were looking forward to a good night's sleep but we got thrown a curve ball - after having been on the island for 6 nights with no issues in "extending" our reservation daily, one of the lodge managers informed us they didn't have a room for us that night - a large group was arriving, all rooms were booked and so were the adhoc tents.  What?!  But we were finishing our dive cert and would be missing the boat back to the mainland - what can we do?!  Luckily we had been there long enough to make some friends so we were able to call in a favor.  The lodge found an additional tent and had it brought from the mainland in the daily supply run.  Whew!  Traveling never fails to throw you curve balls!

Anyway, dive certs in hand, we are off to explore new horizons.  We really must check out these funny looking monkeys everyone is talking about - they apparently look like little old men...
Posted by Unknown at 8:59 AM