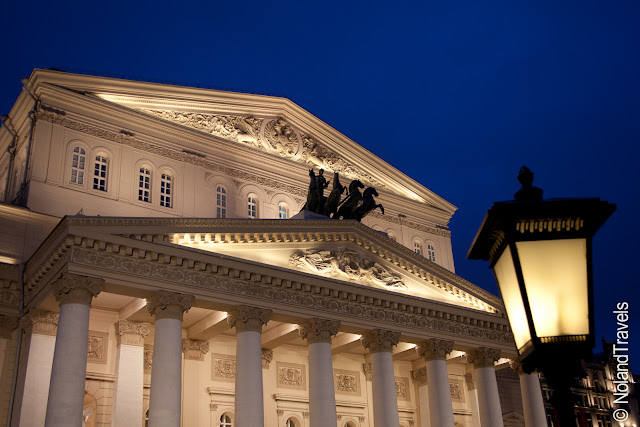 If you've heard this name then you must know that this theater is the home of Russian ballet and opera.  The name literally means "big theater".  It has a rich past and although Josh and I aren't necessarily opera and ballet buffs, we were particularly interested because the famous main stage has been closed for over 5 years of renovations and just re-opened in October 2011.  Our tour guide mentioned that the renovations came at a good time because after the project started, they realized the theater was in worse shape than they thought and was about to collapse!  Therefore, we knew we needed to take advantage of this opportunity to see a bright and shiny refurbished Bolshoi Theater.


Like most things in Russia there are local prices and tourist prices and the Bolshoi was no exception.  The cheapest seat in the house started at 4000 rubbles (about $125).  I was googling away in our hotel room and ran across the reviews on tripadvisor.com where some travelers had just visited the Bolshoi and were able to score last minute tickets from the box office…and for just 100 rubbles (about $3)!  So, that was our plan!  As it was the last couple days of the Russian Christmas holiday period and is, strangely, low-season for other tourists, we thought we might have a shot. 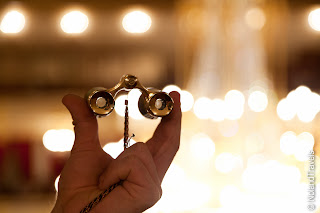 So on Saturday night we headed to the box office about 2 hours before show time.  We got in a queue and the two girls in front of us were just able to say they think this queue is for students only.  We then went in the small box office room, big enough for maybe 40 people packed in, with 2 tickets windows on the left and 2 on the right and all signs in Russian.  There was also a somewhat security guard letting in a few students at a time and pointing others in the right direction.  He first pointed us to the windows on the right and we were quoted prices of 3600 rubbles…each.  Eek - not much of a discount.  Should we wait to see if they go down any more?  What are those people now doing queuing at the windows on the left?  They're not students.

"Josh, go get in line!" Or rather the "pack" - there was not an orderly line but a pack of people.  I feel I should explain a bit more about Russian queuing etiquette, which my friend Maria had warned me about.  Personal space is not so important and sometimes there's a little pushing.  Generally, they make note of who they are behind and who is behind them.  There is also freedom to leave the queue and re-enter it where you were, which is often prefaced by them mumbling something to us in Russian probably letting us know that they'll be right back.  So with that in mind we dashed over to the pack having no idea what we were queuing for!

Everyone kept checking their watches and other people would come in the small space, squeeze through, ask what's going on, leave, come back, etc.  There was also a ticket scalper hanging out in the room, approaching people quietly; I did see him slide a ticket to a lady in exchange for a 100 rubble note as her friends were already at the ticket counter (not the window we were waiting for).  Maybe the scalped tickets are legit?  Not worth the risk!  This went on and on until we were talking to each other and the lady in front of us turned around and told us in perfect English that the tickets will go on sale at 6:30, a half hour before the show.  She was visiting her mom but lives in New York - perfect - a translator for this craziness!  So, at 6:30 the lady at the ticket window started handing out tickets and that was when the fun began - the surge of pushing forward - the little side arguments of who's in front of whom.  Then it stopped and the ticket lady pulled a white sheet down over the window.  Tickets were gone.  There were only about 6 people in front of us.  NO!

Not wanting to resort to the high price tickets still available we decided we'd try again the next night…our final night in Moscow. 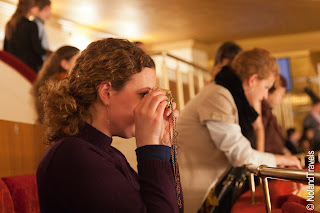 So, on Sunday night we showed up smartly at 5:45, dressed in our nicest travel clothes, passed the student queue and went straight in for the last minute queue to find a horde of little old ladies - more people than the previous night!  Oh no!  We claimed our space and waited.  The same scalper, in his Oliver Twist style hat, was lurking about.  We figured he had an arrangement with the security guard as all other scalpers were out on the sidewalks.  Then around 6:15 they opened the ticket window and boy, did those little old ladies surge towards it!  There was a lot of bickering between them and with the security guard as one by one they handed over their 100 rubble note for a ticket.  Then a lady in front of us in a fuzzy red hat got pulled aside to the closed ticket window just beside.  I thought she was in trouble with the guard!  And as we made our way closer the guard then grabbed us and put us behind the red hat lady.  Why?  What's going on?  Then we noticed all the pensioners were showing little cards or passes - maybe the equivalent of the AARP in the US?!  So, now third in a new queue, with my hands resting on the ticket window ledge, we waited again.  More people were coming in, nosing around and trying to figure out what was going on as we waited again.  We loved it that even though most of them spoke Russian they had no more a clue what was going on than we did! 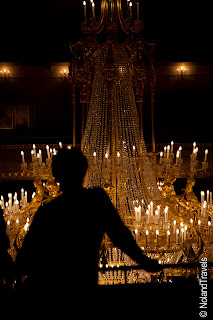 And finally, our window opened and we did indeed hand over two 100 rubbles notes in exchange for two seats in the level 4 stalls - score!  We dashed across the now quite snowy parking lot, found our entrance door and made our way to the top floor where we checked our coats, rented the little opera glasses and then hit bar - for coffee and snacks (salmon on toast for Steph and salami on toast for Josh)!


We could tell from the hallways that this place was going to be grand but it wasn't until they sounded the bells that we started heading for our seats and were in awe of the gild and glamour inside the main stage!  A massive crystal and gold gilded chandelier hung at our eye level and the ivory walls and boxes were decorated in gilded decorative designs.  Hopefully, the pictures show a bit of this. 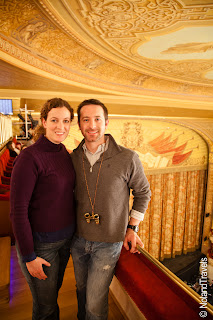 We lucked out with seats right at the railing.  Although we had to be in a perpetual lean against the railing to really see we did have an unobstructed view.  Josh asked as it was starting how long it was.  Having been on the Bolshoi website the night before (and thanks to google translate) I remembered seeing a run time of 2 hours 15 minutes…or was that for the Nutcracker ballet (which was sold out)???  We also both realized as the music was beginning that this was most likely going to be in Russian, we had never heard of the title of the opera and I forgot to read the story synopsis online.  So, expecting to be confused for the next few hours we were both pleasantly surprised to see English subtitles projected above the stage!  Thank goodness because we would have had no clue!  The story ended up being about Tsar Boris Godunov and the demons inside him that haunted him about being involved in the death of a child Tsaravich so he himself could get in to power.

We read about Tsar Boris in our travel books and we saw many treasures that belonged to him in The Armoury of the Kremlin.  Although it was a long opera (4 hours!), it was fitting that it was about Russian history as that made what we were seeing come to life.  This wonderful experience for a total of $6!  Bargain!

It finished after 11pm and we needed dinner but most places were now closed so we topped off our classy evening with pizza and beer from Sbarro Pizza at the underground mall.  It was that or McDonalds, so don't judge us too harshly!  The snow had really picked up as well, so after our classy dinner we headed over to Red Square to take a few photos and make snow angels!  All in all - an awesome night and end to Moscow!  Tomorrow we'd be off to Yekaterinburg! 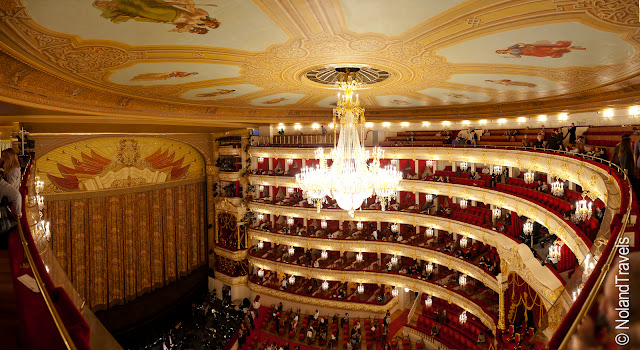