Standing in line in Russia is cold! 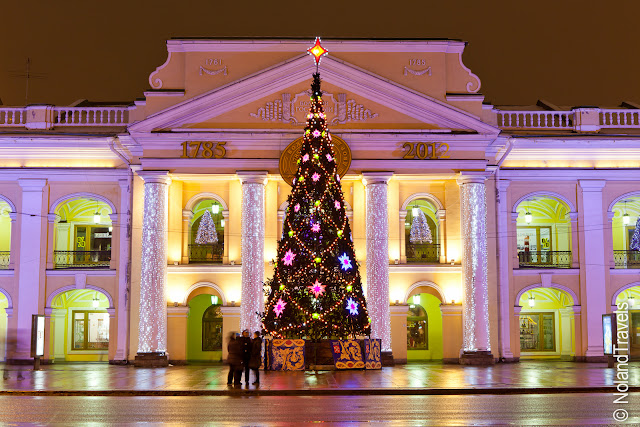 To wrap up St Petersburg a few things come to mind.  We really enjoyed the Christmas decorations but weren't big fans of the crowds that came with them.  All throughout the city decorations were everywhere which added a lot of color and awe to the city.  Big Christmas trees, light poles with decoration and buildings covered in lights.  The down side was that the city was bustling with visitors, mostly Russian which lead to long lines at most of the sights.  I wasn't very amused. Standing in line in freezing temperatures for hours on end just wasn't what I wanted to do. 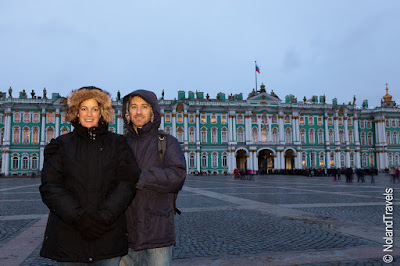 However, Steph ignored my complaining and we visited some of the sights, namely the Hermitage Museum in The Winter Palace (left).  Despite the 3 hour line to get in, this turned out to be the right decision because it was stunning!  You know the saying, everything is bigger in Texas?  Well everything in Russia is on a monumental scale, in grand Tsar style no less!  We've toured some great palaces in our day, but this was on another level.  From room to room we went, admiring the huge fine art collection, marbled hallways, gilded columns, ridiculous gold ceilings, gigantic chandlers, and just grand rooms for the sake of having them.  Some of you have been to the Louvre in Paris, well, this place is similar in size but every room is better than the last thanks to every Tsar wanting bigger and better than his predecessor!  The word "grand" just doesn't do it justice.  Sorry but no photos were allowed inside and I couldn't do it justice anyway.  So, if you're ever in St Petersburg - put this on your "must do" list, regardless of the line to get in.

After the morning visiting the Hermitage, we really pushed my "standing in line" patience limits by also visiting the zoological museum.  It has one of the only woolly mammoths ever found with flesh still remaining, thanks to the preservation power of the permafrost ground in Russia.  It's actually kind of creepy because it looks like a huge dark leather mammoth just sitting on his back haunches.  Other than the mammoth, we saw a stuffed version of pretty much every animal on the planet - crammed in to old and dusty cabinets.  Cold line, but still good to see.  Here is a photo from Wikipedia.

We capped off the day by going to a recommended Russian restaurant that was meant to provide the typical Russian atmosphere.  With fancy decor, lavish colors and fabrics and cushy seats with pillows it was definitely a neat atmosphere.  Authentic?  Don't know.  But they served up chilled vodka and some hearty food with a interesting atmosphere.  A great way to cap off St Petersburg.  Na Zdorovie! (pronounced Nas-drove-ee-ya, "cheers" in Russian)

Before I go, a few more things on St Petersburg for future visitors.


We can confirm the reports that food and drink are expensive.  Prices seemed to be on par with or maybe slightly more expensive than London.  Not surprisingly, wine was particularly expensive since it was mostly imported.  That meant we had some frustrating walks in the cold trying to find menus we could read and prices that suited us. 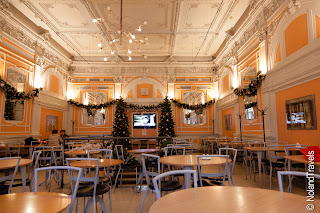 Be aware that lunch time is more of a set window than you may be used to.  One day for lunch by the time we decided to start looking for food, we were too late.  We found out that many local restaurants, the places you want to eat at, actually stop serving during the few hour period between lunch and dinner.  Funny enough, we ended up at McDonalds - possibly the busiest McDonald's we've ever seen - I guess everyone else was either late like us or watching the food budget!  After waiting for a table to free up, the lunch and the respite from the cold really hit the spot.  Along with the Big Mac and fries!

We also found some interesting food venues.  Remember everything in Russia being on a grand scale?  Well restaurants are no exception.  The above photo was a simple cafe we choose for lunch.  Even when asking our hotel for a simple nearby restaurant for dinner one night, we found it decked out out with shiny marble floors, brass light fixtures and lavish curtains - and it was reasonably priced!  We also went to an Italian restaurant with a grand staircase; we ate on one of the staircase landings while watching Roman Holiday projected on the wall.  Loved it!

Finally, here are a few more photos of the grand decorated buildings of St. Petersburg.

The train to Moscow awaits… 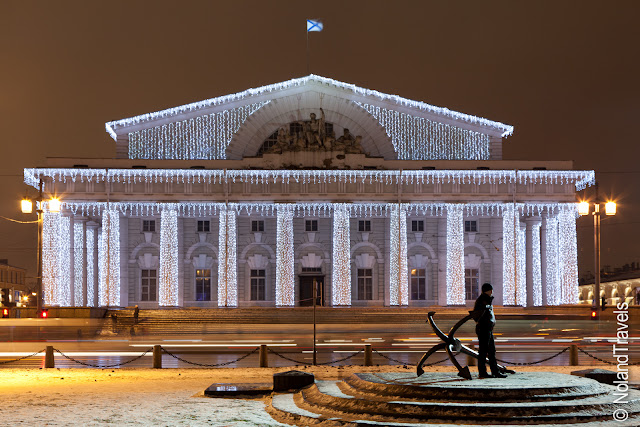