What do dinosaurs and fashion have in common?

Nothing, really. Except that we had a London weekend of fashion and dinosaurs. In late February we took a Saturday morning to visit London's Fashion Weekend at the lawns of theNatural History Museum and then took in the museum exhibits later that afternoon.

The Fashion Weekend event wasn't quite what we expected. It was really just a booth-style atmosphere where designers had booths selling their clothes, shoes, jewelry and other accessories at extremely discounted prices. The catch was that we really didn't know many of the names...not sure if we just aren't "in tune" to current fashion or if this was just a weekend for lower level designers to strut their stuff (i.e. Dolce Gabanna and Versace failed to attend). Steph had good fun, though...bought a great black and white Jacob Kimmie houndstooth cape, had a manicure and had Josh by my side the whole time - a magical day!

After wondering the fashion weekend venue we thought we should take in the Natural History Museum, since it's free, like most museums in London. The main reason we wanted to go was to see the Dinosaur exhibit.

They had a few amazing exhibits...many of the bones were found in the US! And we learned that Earth is about due for an ice age but global warming may be helping putting it off. Hmm. Don't really know what to think about that - neither option sounds too good.

We followed the crowd seeing all the "lessor" dinos (lesser than T-rex, of course). Then waited in the slow line winding around a corridor to see the big t-rex exhibit. And we were greatly disappointed to come across a rather weak robotic t-rex. It wasn't even a cool set of bones - just a robotic t-rex. boo.

However, although the bones were a bit disappointing, the Waterhouse Building that is home to the museum is in is absolutely FABULOUS! It was purpose-built to be the Natural History Museum way-back-when (~1860-1880) and the amazing architecture captures you...then as you take a closer look you see that animals and plants are intricately built in to the design and decor that make the detail so fabulous. Imagine an intricately designed 30-foot arch and then noticing monkeys delicately climbing it with birds perched in the corners. Yes, the building was quite amazing.

All in all, it was a good weekend exploring two extremes - fashion and dinosaurs!

Here are a few photos that don't do the museum justice as most did not turn out.
Posted by Unknown at 3:07 PM
0 comments 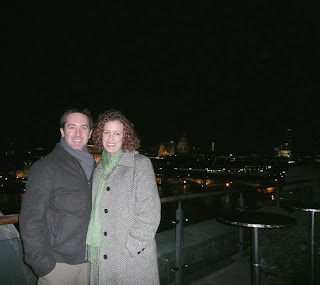 For Valentine's day we decided to have a weekend out in London. To start we had dinner at the Harvey Nichols Oxo Tower Brasserie on the south bank in London. The picture is taken on one of the balconies overlooking the Thames and St. Pauls Cathedral in London.

We had an early dinner so we could watch the sunset from the 8th floor where the restaurant is situated. Luckily that evening there wasn't any cloud cover so we had a spectacular view of the sunset over the capital. Dinner was great with excellent food and service but the best was the view. Having a birds eye view of all the tourist spots that make London is fantastic. The Brasserie now gets a recommendation from us.

After staying the night on high street Kensington we took the bus in to town driving past Kensington Palace, Hyde Park through Piccadilly Circus getting off in Leicester Square to hit the half price ticket booth hoping to get some theatre tickets. Unfortunately all of the shows were dark so there weren't any tickets to be had.

After touring central London a bit more we headed home. A great Valentine's Day 2008.
Posted by Unknown at 4:30 PM
0 comments

Its been a fairly low key month since New Years but here is what we have been up to anyway.

In January we toured Temple in London which had an open weekend as part of a year long festival to celebrate 400 years of existence. Any Di Vinici Code buffs will know that this is home to the Knights Templar and whose Temple church was featured in the Di Vinci Code film. The 12th century Temple church is the main attraction which sits in the heart of legal London and is part of a big campus of buildings surrounded by gardens and grounds all with historical significance intertwined with law societies. It gets complicated quickly so you'll have to read up on it.

Then a couple weeks ago we saw Linkin Park in concert at the O2 dome, formerly The Millennium Dome. The concert was a fun evening and it gave us a chance to see the dome which has a troubled recent history as we found out during the weeks leading up to the concert. Anytime we mentioned the O2 dome everyone would instantly start complaining about what it used to be.

To make a long story short the dome was highly touted by the government during the build up to the year 2000 to do all sorts of things such as bridge the gap to the new millennium but was seriously over budget and cost the tax payers something like 800 million pounds just to construct it. On top of that it closed down not long after it opened because it couldn't support itself financially. No wonder everybody has a bad taste for the dome.

The building itself is a tremendous site and has recently been taken over and revamped to stand on its own again. Its now sponsored by O2 a mobile phone company and is worth a visit.

Finally to round out the post, last Tuesday was Shrove Tuesday also known as pancake day. This gave us a good excuse to have pancakes for dinner. However, we didn't have the crepe style pancakes that are eaten in the UK. We broke out the Aunt Jemima and made good ol' American style pancakes. We just missed the Purnell's Old Folks sausage.

Our travels pick up soon so stay tuned.
Posted by Unknown at 4:58 AM
0 comments