We have exorciiiiiiised the (kitty) demons!

Mia has been plagued by a demon recently. She has been spending the majority of the day in the bedroom and most times being under the bed in the bedroom. She might start in a lovey mood in the bedroom and I would carry her in to the living room and sit on the couch....then she would look around in a panic, jump off my lap and run hunching low to the ground, back to the bedroom. What on earth is wrong with Mia?

We started thinking about it and Mia was definitely not happy in the living room. What's new in the living room? Nothing really. Then tonight we thought about the toy Josh bought them while I was in the US. He bought a kitty toy consisting of a foot-long piece of feather boa that was hanging from a string on a pole. So waving it around it kind of looked like a bird or squirrel (the boa makes it look like a squirrel). Simply enough, right? All cats love feathery, fuzzy things tied to a pole, right? We've had "birders" before - two long, stiff feathers tied to a string on a pole and they loved it.

Well, when I got home from the US Josh said, "Hey, look. I bought them this toy but Mia acts really weird with it." So, he pulled it out of the desk drawer (which is in the living room) and Mia freezes. She watches it fly around, then hisses! And when he put it on the ground for her to approach she would hiss more and make this awful low growl!! She acted as if she wanted to absolutely kill it - and not in a I'm-a-cat-and-I-love-to-play-hunt kind of way.....I'm talking a this-is-the-most-wretched-thing-I-have-ever-seen-and-I-want-to-annihilate-it!

So, Wednesday night I theorized that she is avoiding the living room because she knows this thing is in the desk drawer (she was eyeing it down still in a fit when Josh put it away that day). I suggested we bring it out in the hall, (grab her from under the bed first!), show it to her then throw it in the guest room. We always keep our guest room door closed - the kitties are not allowed in there (so guests can rest in a cat allergy free and hair free environment).

Well, we did. We let her growl over it, bite it and hiss at it for about 10 minutes in the hall and then I took and with her eyeing me down suspiciously, I opened the guest room door and threw it in. She jumped as if to chase after it but I closed the door and we all left the hall.

It being Saturday morning now, I am glad to saw we have, in fact, exorcised that demon. Mia has been in the living non-stop, hanging out with us again like normal. I think we need to write a letter to that toy manufacturer - that was a scary incident! haha!
Posted by Unknown at 4:37 PM
2 comments 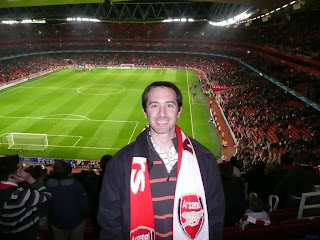 I received a great phone call from Steph Tuesday at work about a coworker that had an extra ticket to the nights Arsenal Champions League Game. Wow what a great surprise because I have been wanting to go to a game since we moved. Thanks Steph!

The game was at 7:45 so I left work a bit early, drove home, caught the train to London Bridge, and hopped on the tube getting off at the Arsenal stop. It was a journey but worth it.

My seat was in the upper deck of gate D behind Arsenal's second half attacking goal. They scored 4 second half goals right in front of us to win going away 7-0. Are you kidding me? 7 goals?! That just doesn't happen very often. Lucky me. It equaled the biggest Champions League win in history.

Since tickets are so hard to get a hold of I hope this isn't the last game I will have a chance to see but if it is I sure picked a good one.

Here are the photos I took from my seat including a nice one of a corner kick in the second half.

One final note because I don't want anybody to get confused where my loyalties lie. I am still true blue. Go Cats!
Posted by Unknown at 12:32 PM
0 comments

Steph's Back in the UK

Just a quick post to let everyone know Steph made it back safe. Her flight left half an hour late and arrived half an hour early thanks to a big tail wind.

Now the only thing left to do is unpack...
Posted by Unknown at 7:32 AM
0 comments 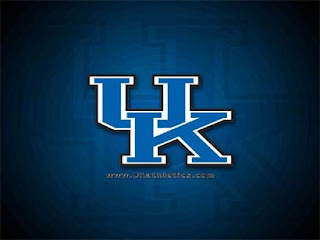 What a game! Down by 13 in the 3rd quarter the cats came back to win in 3 overtimes. The best thing about it is that I was able to watch it all live and in color thanks to my shiny new Slingbox.

I was practically there jumping and yelling at every big moment. That is if you make exceptions for the fact that I woke up my neighbors because its 1:30 AM, stepped on one of my cats who were scared out of their minds at my crazy behavior, and had the Rugby World Cup on the tele to see England advance to the finals. Ha!

The Slingbox purchase has officially been justified.

Lucky Steph sure picked a good football game to attend. Lets just hope she didn't get in trouble trying to tear down the goal posts...

Before I go I need to give a big shout out to my cool nephew Garland who's West Jessamine football team beat their cross town rivals, East, to make it to the playoffs. Good luck in the playoffs G!

Finally a big thanks to Jamo for turning on the Slingbox today so I could watch the game.

I am so wound up, luckily I don't have to work tomorrow. GO CATS!!!
Posted by Unknown at 8:24 PM
1 comments