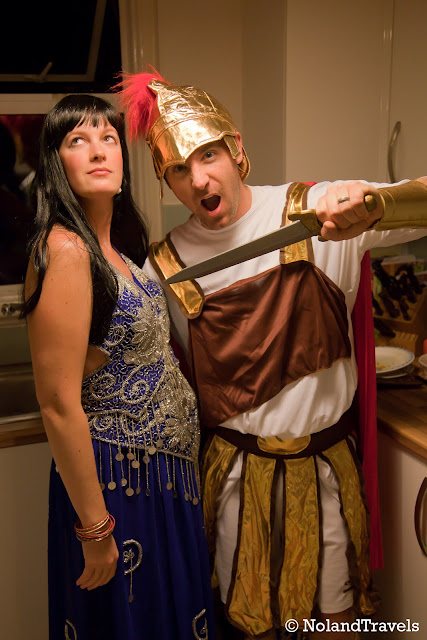 A Gladiator Style Ending to Jordan 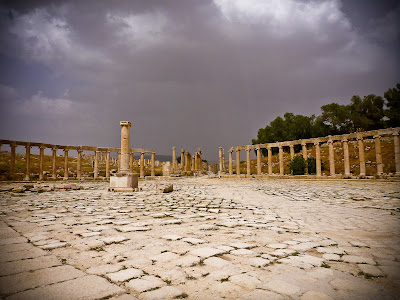 All good things must come to an end, "but not yet...not yet!", so said character "Juba" in the movie Gladiator.  And this is a fitting analogy given our last day's activities.

We woke up in the small town of Madaba, just outside Amman, Jordan.  The main draw of tourists to this city is the Mosaic Map of Jerusalem, dating back to the 6th century. It is the oldest known geographic floor mosaic in the world and came in handy for verification of biblical sites. 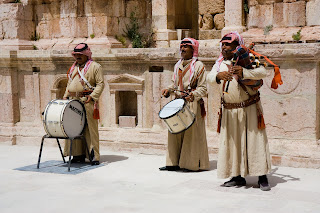 After seeing the map, we hired a mini van to take us to the old Roman city of Jerash that dates back to the bronze age.  We quickly realized that Jerash was amazingly preserved and it was simply epic!  It had two theaters, a huge oval circus that started a long walkway through the city, which was even complete with ancient day plumbing (see the Roman man-hole cover!).

While we were there the equivalent of a Jordanian school field trip appeared with a swarm of young children. We had to wade through them at one point to get to the forum when one little boy came up to Josh and squeezed his bicep.  Josh was a somewhat taken back at first, but then the little boy smiled playfully posing by flexing his biceps. He quickly ran off to join his school group leaving us to have a good laugh! At other stages it was a rapid fire Hello, Hi, Hey, Hello, whats your name, as all the kids practiced their English when they saw us.

In one of the theaters we climbed to the top and listened to a Jordanian 3 man band play.  Sitting high up in the views were great when we noticed a crew of suits entering the theater with photographers and an entourage.  We quickly realized it was some political figure getting a guided tour and deduced that it was someone from Ireland, but didn't figure out exactly who though.

Back to Jerash itself.  It was like a Roman play land...you could really walk about and get a feel for how the city appeared and how they lived.  We could only imagine how splendid it must have looked in its glory days!  Even today the circular forum was out of this world.  The big columns were just grand.  You could just imagine ancient Romans going about daily life in their sandals and robes carrying scrolls.

To top off the sites we were able to experience some good old fashion Roman entertainment. A Gladiator show!  We just couldn't resist.  It explained Roman army weapons, armor, tactics and formations.  There was a bit of cheesy talk but it was good cheese!  Even horses and chariots racing around the old Hippodrome, wheels and hooves throwing up sand as they speed around chasing one another.  Then after giving us all the background, it was time for some Gladiator fights!  Mano y Mano, they fought and each fight ended with the Gladiator with the advantage asking the crowd for a thumbs up or thumbs down, to decide if the loser would get the killer blow.  A couple of them did!  Awesome!

The day came to a close back in Madaba, where we hit an excellent restaurant built amongst several attached buildings and courtyards to have a Jordanian meze dinner.  We all talked about our favorite part(s) of the trip and about the breaking news of the volcano in Iceland (and whether some of us were going to be making it back to London the next day!).  The British couple, Will and Elv, also presented their list of trip songs.  Modern day songs with their titles tweaked to become representative of our trip - it truly cracks me up every time I read them!  I hope you find it half as funny as I did!  Thanks Will and Elv for this everlasting laugh!