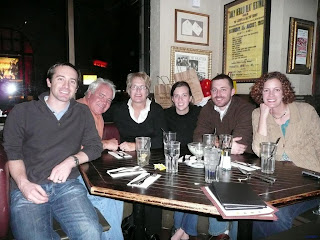 Sadly, the family reunion in London and Venice is over. Everybody is back in KY getting back to normal life preparing for Christmas. I'm sorry the post is a bit late but we had to recover from the hectic pace and put in a few extra hours to make up for the last few weeks (sleep and work!).

We started at the Tower of London, home to the royal crown jewels. They were a spectacular sight and included the world's largest cut diamond, the Star of Africa. Sorry Steph, that diamond wasn't for sale when I bought your ring, shame...

Another cool siting at the Tower of London were the ravens which have been on the grounds since 1865. It is said that if the ravens leave the tower the kingdom would fall. They are fairly spooky birds flying and hovering around. Especially since it was dark, rainy and foggy.

The following day it was cold, windy and rainy which turned out to be a theme for the week. Since it was typical British November weather we decided to visit Harrods, which was all geared up for Christmas. They ladies did plenty of shopping and us men found the pub in the basement.

Monday Steph and I went back to work for the week while everyone else did more touring in London. As we didn't go with them I will let them tell the stories but they visited the British Museum (finding Zac's portrait on the wall), the London eye, the south bank of Parliament, and toured the Chelsea Football Club grounds. 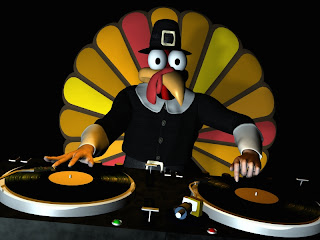 Here's wishing everyone a Happy Thanksgiving! Eat extra turkey and stuffing for us. Steph's craving some of Kathy's sweet potato souffle and oh how I would love a big helping of my Mum's pineapple casserole...

Unfortunately its not a holiday in the UK so Steph and I are at work counting the hours until we can get our fill of turkey tonight. Thankfully we have some family over to help us celebrate which is a great added bonus. I will hopefully blog more about our adventures this past week or so after we get back from Venice.

Tonight we have reservations at the original Hard Rock Cafe in London to have our Thanksgiving meal. Its not exactly home cooked but it should be entertaining. Plus it gave me a good excuse to use that image above.

In any event here's what the Hard Rock's website says about their menu tonight, "Join us this Thanksgiving for turkey with all the trimmings.... Turkey dinner, pumpkin pie and an infamous rock n roll atmosphere." Hopefully they will ROCK the turkey...

In honor of the day we want to say how thankful we are for those we have in our lives at the present and for the memories we have of those who are no longer with us. 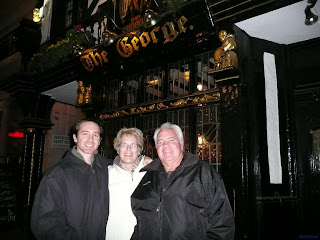 I just want to let everybody know that Kenny & Lois made it over without a hitch and have had a great start to the trip.

After they landed on Friday we toured London seeing the main sights of Big Ben, Parliament, the London Eye, Trafalgar Square and Oxford Street which is already decorated for Christmas. We decided that Christmas here starts after Halloween without Thanksgiving to hold things up a bit. All of the Christmas decorations and commercial blitz have already started which is another reason to dig Thanksgiving, bring on the turkey and stuffing...

On Saturday we took the train back into London touring the Borough Market where we had some tasty treats and then watched the fireworks over the Thames for the Lord Mayor's celebrations. Finally, we hit a pub for fish and chips.

After sending them on the Eurostar to Paris yesterday I just spoke to them and they arrived in Paris as expected. Here's wishing them a Happy 30th Anniversary!

That's all from here until Zac and Tara arrive and when things really pick up. Any experienced travelers be sure to throw any pub suggestions my way.