Mongolian Winter In A Ger Tent 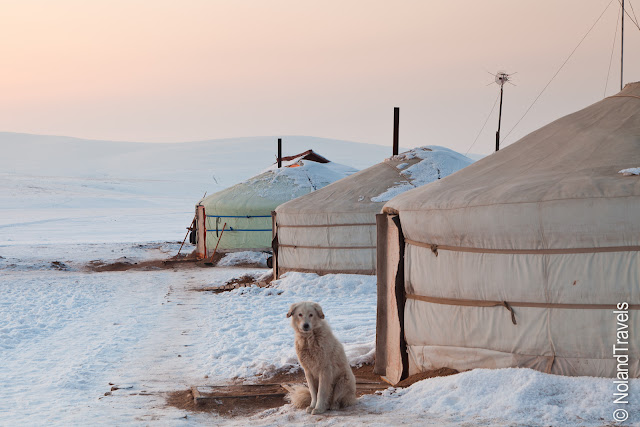 Mongolia is the most sparsely populated county in the world.  Outside of the capital much of the country survives on mining and agriculture in combination with a large percentage of the population that are nomadic herders living in Ger tents. So, a trip to Mongolia would not be complete without taking yourself back in time and experiencing this lifestyle.


Agi had arranged for us to have lunch with a local family in their Ger tent.  Being nomadic they move twice each year, once for the winter and once for the summer to situate themselves for seasonal benefits such as water or protection from cold winds.  This particular home for the winter period was nestled nicely on the up slope of the mountains.  They had one neighbor and both families shared the small shelter for the animals which included horses, chickens, cows and goats.  Around the shelter the snow was cleared and the dirt was showing through. 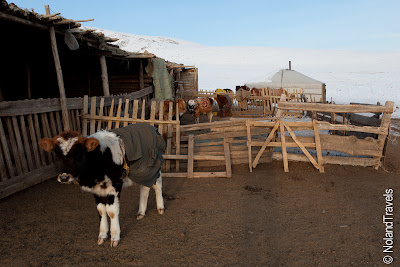 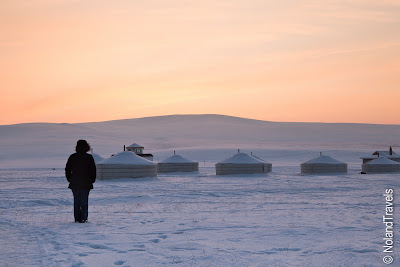 Upon arrival the man greeted us at the door to the tent and welcomed us into his home.  We entered and were given a seat on the man's side of the tent which Agi had prepped us for.  The tents are traditionally divided in half with the man's side was reserved for tools, motor bikes and the like, while the women's side, as I'm sure you can guess, is reserved for the kitchen and preparation of food.  In the middle is the heart and soul of the Ger tent - the fire stoked oven - which also served as central heating.

After sitting down and being served traditional goats milk tea (mainly milk, not so much tea), two things struck us instantly.  First and foremost was how warm the tent was inside.  Who would have thought that in the middle of winter it would feel like a sauna!  My first instinct was to quickly take off my coat, hat and gloves to cool down.  Secondly, we were amazed at how much space there was inside.  The tents are round and everything in them is pushed to the outside walls of the tent. This creates a big space around the stove that gives the tent a very open feel.  Around the edges the family had a couch and table, beds, dressers, cabinets, small tv, motor bike and sink.

On the menu for lunch was a very hearty meal - a huge portion of a traditional dish of homemade noodles, mutton and onions.  Served with bottomless goats milk tea!  Remember how I was telling you that Agi and the driver like to joke around?  Well they didn't tell us how to avoid getting refills of milk tea.  As got to the bottom of our tea, the man or wife would always come and refill it, no matter how many "No thank you's" or "I'm full" we tried to translate.  Each time Agi knowing we didn't want any more would laugh and say, "its good right"?  Yes its good but I can only drink so much milk in one sitting.  So, finally after our 3rd cereal sized bowl  of tea she told us the secret.  Hold you open hand over the bowl, palm down, covering the bowl.  This signals you are finished.  It worked for the food too, thankfully.  We were stuffed to the brim on tea and noodles.  However I do have to say, that in the middle of the winter the food was very tasty and really hit the spot.

During our delicious lunch, we had an interesting hour or so conversing (translated, of course) with the man and his wife.  He even took us on a quick tour outside his home showing us the animals.  Not surprisingly, all the animals had small coats on to help protect them from the elements - made from scrap carpets or human clothing.

After a successful late lunch we headed to our last stop of the day and our accommodation for the night - a ger encampment about 20 minutes away.

The encampment was set on an awe-inspiring plain, covered in pure white snow surrounded by hills and mountains.  Driving up to it was awesome.  The driver wasn't even using a road so we were cutting a fresh path in the snow.  He had fun revving the engine and fish tailing the van in the snow and of course laughing all the way. 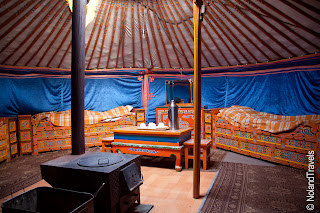 Opening the van door we were greeted by some of the resident "guard" dogs that roam the camp.  A little taken back at first as they were huge and nearly jumped in the van, they provided some added comfort guarding our tent throughout the night. 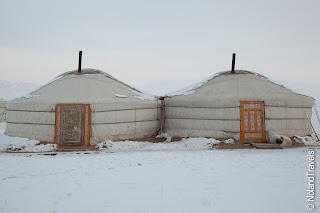 We were then introduced to the locals who live at the camp and maintain the property.  They grabbed our bags and led us to our tent.  After being in the locals tent we had a better idea what to expect but it was so cool going in knowing we were staying the night.

Inside the tent was very colorful and spacious.  There were 4 beds, a table, rugs on the floor and some cabinets.  To keep it warm the stove was stoked with coal and wood every 4 hours, so they warned us not to be surprised when we get a couple visits in the middle of the night  - the attendants would be coming in to stoke the fire while we slept. 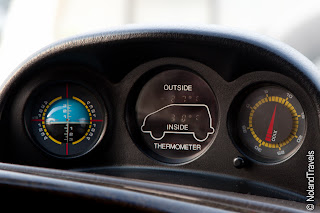 The rest of the camp was very simple.  A handful of ger tents, a restaurant (2 ger tents hooked together), two small buildings, one for coal and supply storage and the other a bigger dining hall for for use in the summer when all the tents are full - and we had the entire camp to ourselves!  Oh and an outhouse on the edge of the camp.

Being the only visitors was surreal.  But I guess who else is crazy enough to stay here in those temperatures.  That night it dropped to -31F(-35C).   The picture is from our van temperature gauge which stopped working when the temperatures went below -30.

After arriving at the camp, we had a few hours before dinner so we relaxed and took photos.  The scenery was just spectacular - the tents, snow, mountains and sunset.  But taking photos in those temperatures was challenging, to say the least!  The camera did ok although the LCD screen started to get sluggish, but it was the man taking the photos that really struggled.  It went something like this: Setup the camera on the tripod.  Run to the tent to warm up.  Go back out, take a photo, run back to the tent to warm up.  Repeat.  Steph just relaxed inside and had a little laugh every time I came busting through the door.  My hands were freezing! 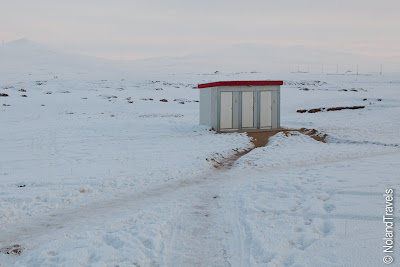 Eventually, Steph did have to venture out to check out the "ladies room".  It had 3 doors and surprisingly even had men and women labels. We both concluded they were fairly nice outhouses but it wasn't until a couple hours later that she casually said, "...thank goodness they have the heater in there...".  Heater?  Hang on wait, mine didn't have a heater! Needless to opted for the heated stall from there out.  And as you can imagine, a middle of the night bathroom break was an adventure.

For dinner we had another very hearty meal.  Agi was very entertaining explaining about the food and culture. We even played some traditional games to wind down the evening.  In the end, we retired to the warmth of the ger tent and had a cozy night's sleep after a long day of touring, freezing temperatures and hearty food.


The next morning, we returned to Ulaanbaatar where we would spend our last night.  We visited the natural history museum where we saw some interesting dinosaur fossils but learned that many of the best finds were actually in other countries like the US and UK.  Mongolia is apparently a hot spot for fossils but in a similar story to their mineral riches, they didn't have the manpower or money to excavate them so other countries have taken advantage.  With the cold temperatures, it made wandering around quite uncomfortable so after a little souvenir shopping we headed back to the hotel to relax before our last train segment to Beijing.

I'll leave you with 2 photos.  The first of us and our lovely guide, Agi.  I'm not sure what happened to my arms but hey.  And the second a self portrait I made outside our tent freezing my arse off... 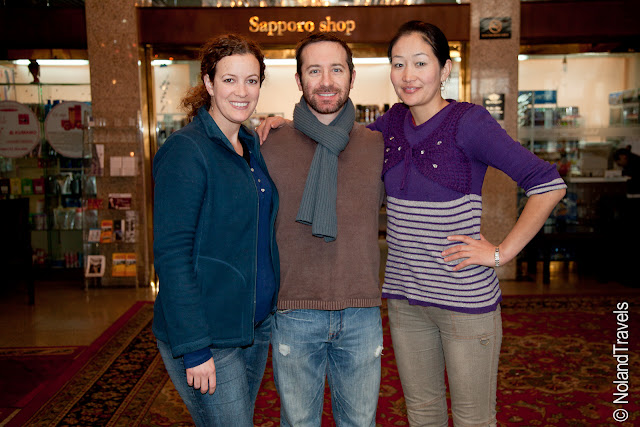 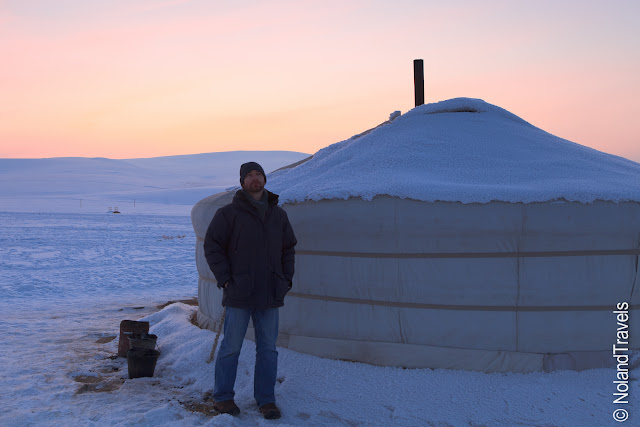