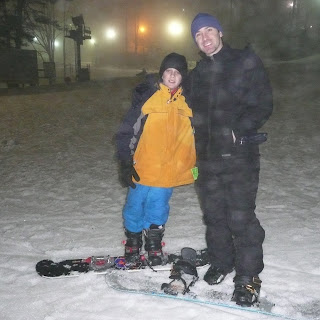 While I was home for the holidays and since we were in West Virgina only a few minute drive from Winterplace Ski Resort, Garland and I decided we would have a guys night out and learn to snowboard.

We had an hour and a half intro lesson that taught us the basics of stopping, using the edges of the board to control your speed while you are moving in all directions and how to get on and off the lift without making a fool of yourself.

To make a long story short snowboarding is much tougher than it looks. We spent a lot of time on the snow and our ski gear was soaked when we left. If you are new to snowboarding expect to fall a lot and to be sore the next few days.

Garland took to it like a natural. By the end of the night he was doing tricks and going down the mountain in style. Check out this video of him snowboarding. We had a great relaxing night of fun.

Here are a few photos of us on the mountain.

I know it's not quite Switzerland but that trip is right around the corner. However, it will be on skis...
Posted by Unknown at 7:16 PM Links to this post
1 comments 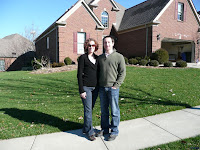 That song had a new meaning for us this year. There really is no place like home for the holidays! We had a great time in West Virginia and Lexington seeing our friends and family. It was a whirlwind trip going from one Christmas event to the next. And every moment was great!

We are back in London safe and sound already having unpacked and repacked for Edinburgh. The cats were glad to see us but are going to be upset again tomorrow.

We want to thank all of our friends and families that helped to accommodate our crazy schedule.

Merry Christmas and Happy New Year!
Posted by Unknown at 11:33 AM Links to this post
1 comments 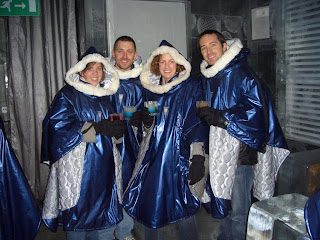 On Tuesday night Zac, Tara, Steph and I decided it would be fun to visit the Absolut London Ice Bar so here is my take on the experience.

First a little background, the temperature inside the bar is kept at a constant 5 degrees and everything is made from water (ice) frozen from the Torne River in Jukkasjarvi, Sweden.

To get into the bar you book a 40 minute time slot that costs £12 during the week and £15 on the weekends to get in. Its a bit expensive but the entry fee does include a designer thermal cape to keep you warm, an ice glass and one cocktail.

Initially we were excited to get into the cold but after getting our drink and taking a look around we realized the bar itself wasn't all that impressive. Other than some music blaring there wasn't much to enhance the experience. The bar itself was a dark modern gray that was amplified by the ice. There was just something missing.

They had some ice seats covered in fake animal skin so you could sit down without sitting straight on the ice.

One cool thing however was the ice cup you were given for your drink. It was a neat to drink out of a hollowed block of ice.

In summary it is something I'm glad I could experience but probably won't do again.

Ice Bar Photos
Posted by Unknown at 9:14 AM Links to this post
0 comments