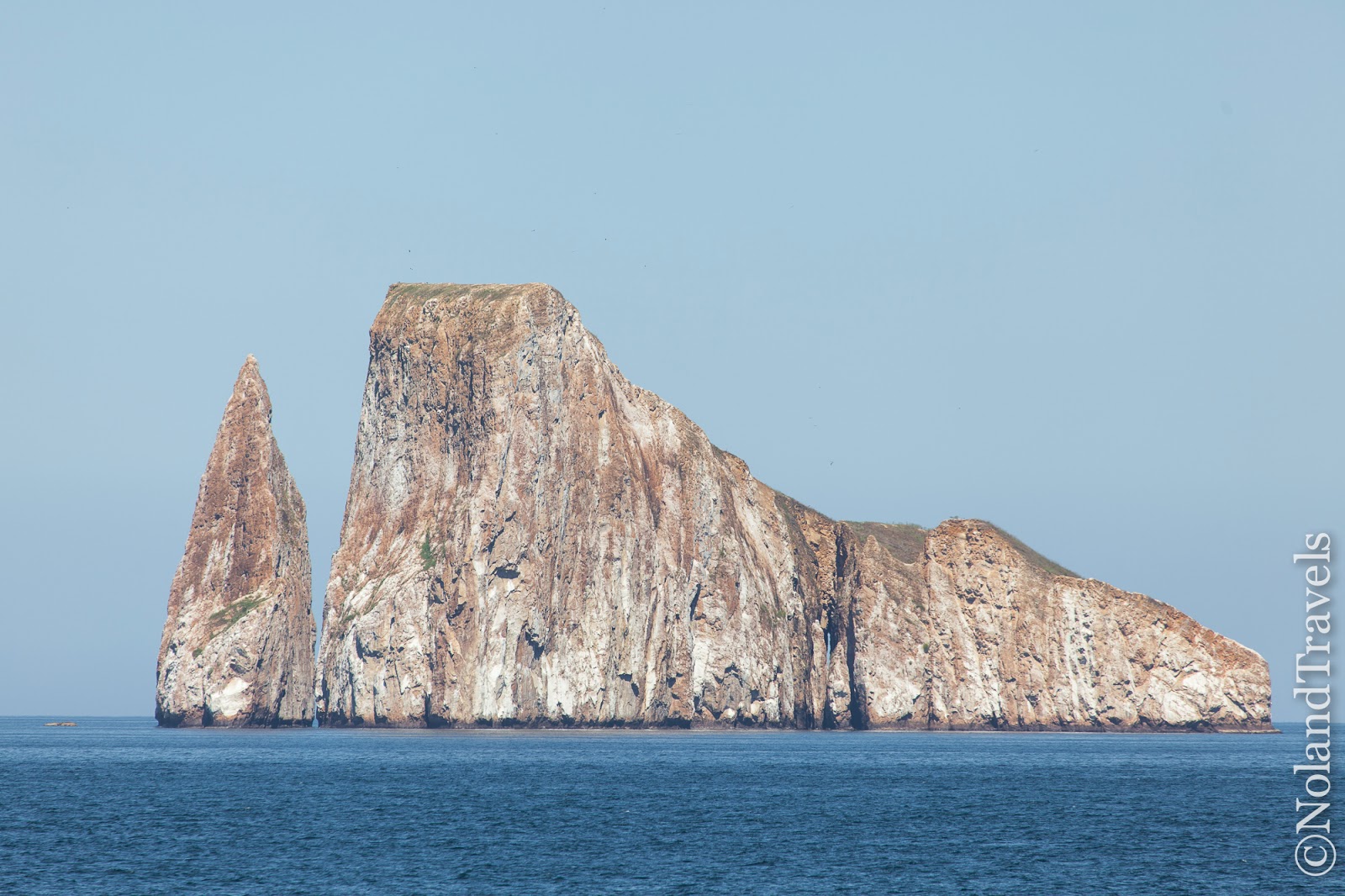 After the morning beach visit we headed towards Kicker Rock to get a closer look at the big white rocks that juts out of the ocean between a few of the islands.  Its an area known for good snorkeling and even some good scuba diving, so lets find out!

Before I get to the snorkeling, I want to explain how/why we ended up on a touring boat to explore the Galapagos instead of a diving boat. There are two main types of touring you can do in the Galapagos - visiting islands for the wildlife (land-based or boat-based) or scuba diving for the Galapagos's lesser known, but equally epic underwater wildlife.  Most trips do not combine both because the dive sites are mostly at the far reaches of the island chain, so you normally have to pick one unless you have the luxury of lots of time and/or money.  It was a tough choice because the scuba diving in the area is renowned for the ability to get up close to large schools of hammerhead sharks - something high on our "epic things to see while scuba diving" list.  But since I was still recovering from my wrist surgery (fresh out of the cast the week we left), the cruise was the safer option.  Plus the animals on land are probably more unique and that just couldn't be missed the first time around.


To help bridge the gap, we ensured the itinerary included quite a few snorkeling opportunities.  Some off the beach, some off the back of the boat in the middle of the bays and this one, at Kicker Rock. 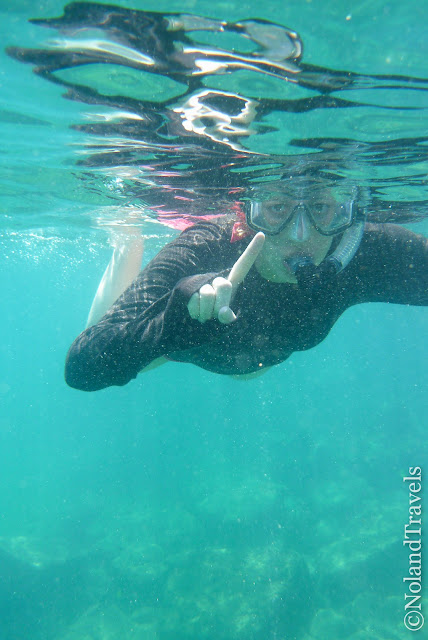 Leading up to the today's snorkeling attempt we hadn't been overly impressed with the snorkel sites.  First and foremost, the water was cold.  And without wetsuits a 30 minute snorkel was tough.  The visibility wasn't great either and although we'd seen a few nice underwater scenes, the overall result was average snorkeling.


Would today be any different?  Other sites were in much shallower water near the coast but here at Kicker Rock we were a long way from the coast with no bottom in site.  The visibility was better but still not crystal clear leaving you seeing only about 8-10ft down to the mirky cold depths.

As the bell after breakfast rang, Efrain yelled out that anybody going snorkeling would need wet suits.  Oh man, colder than normal, ouch.

Suited up, we climbed into the dingy and headed to the drop location at the mouth of a narrow channel running between the two large rocks.  The water was dark blue in stark contrast to the white washed rocks.  As we snorkeled near the rocks, heading into the channel, a white tip reef shark swam underneath us which immediately made us forget about the temperature of the water and the waves smacking the sides of the rocks.

Swimming further into the channel we came across a group of eagle rays about 3 feet below the surface.  Anybody who has seen a ray swim will tell you they just glide through the water, wings gracefully moving through the water.  Our eyes widened as they swam under us without a care in the world. 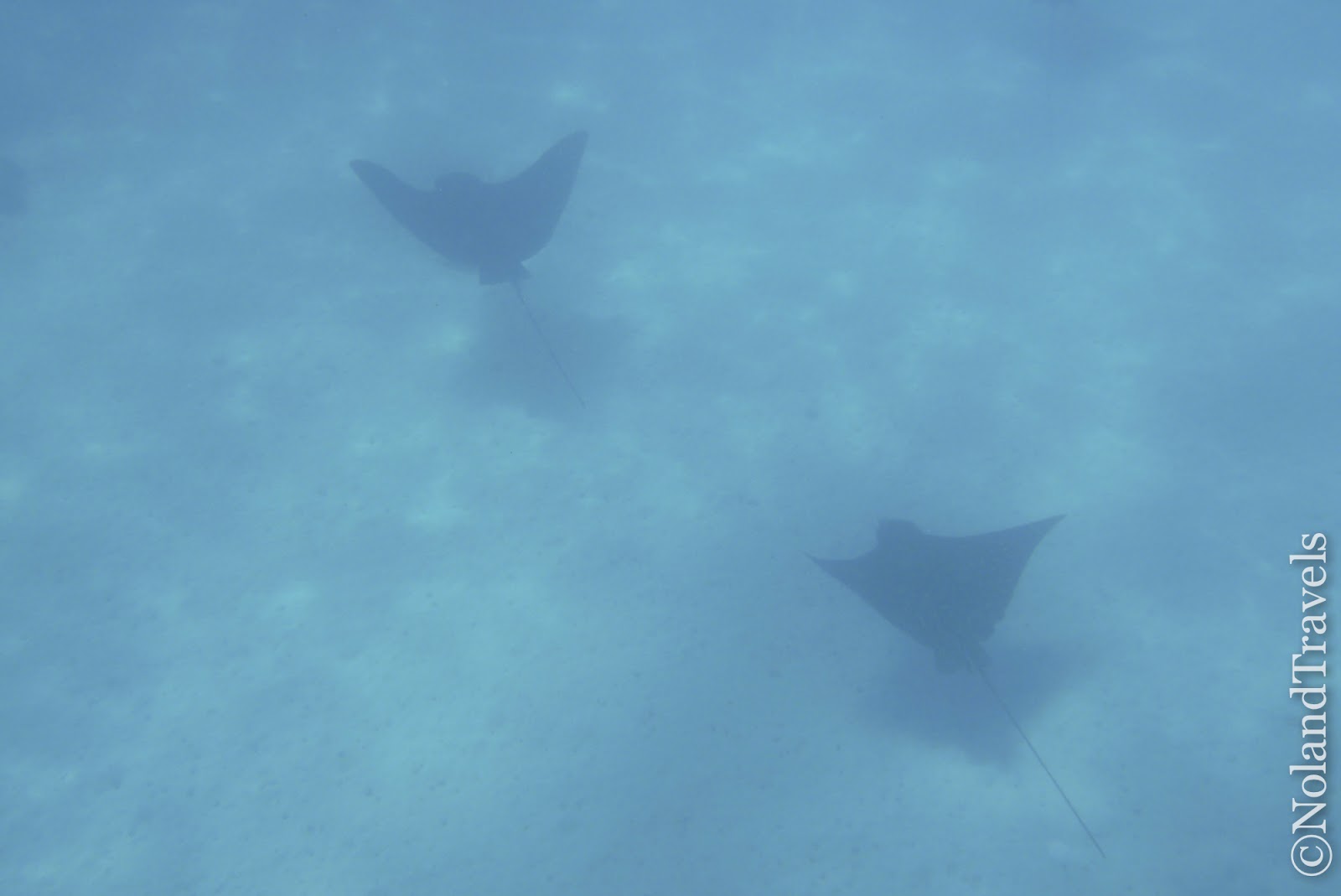 Then a small school of 3-4ft Galapagos sharks appeared out of the mirk from the left.  This time about 4-5 feet below us.  They just appeared from the depths and took us by surprise swimming towards and quickly mixing in with the Eagle Rays. 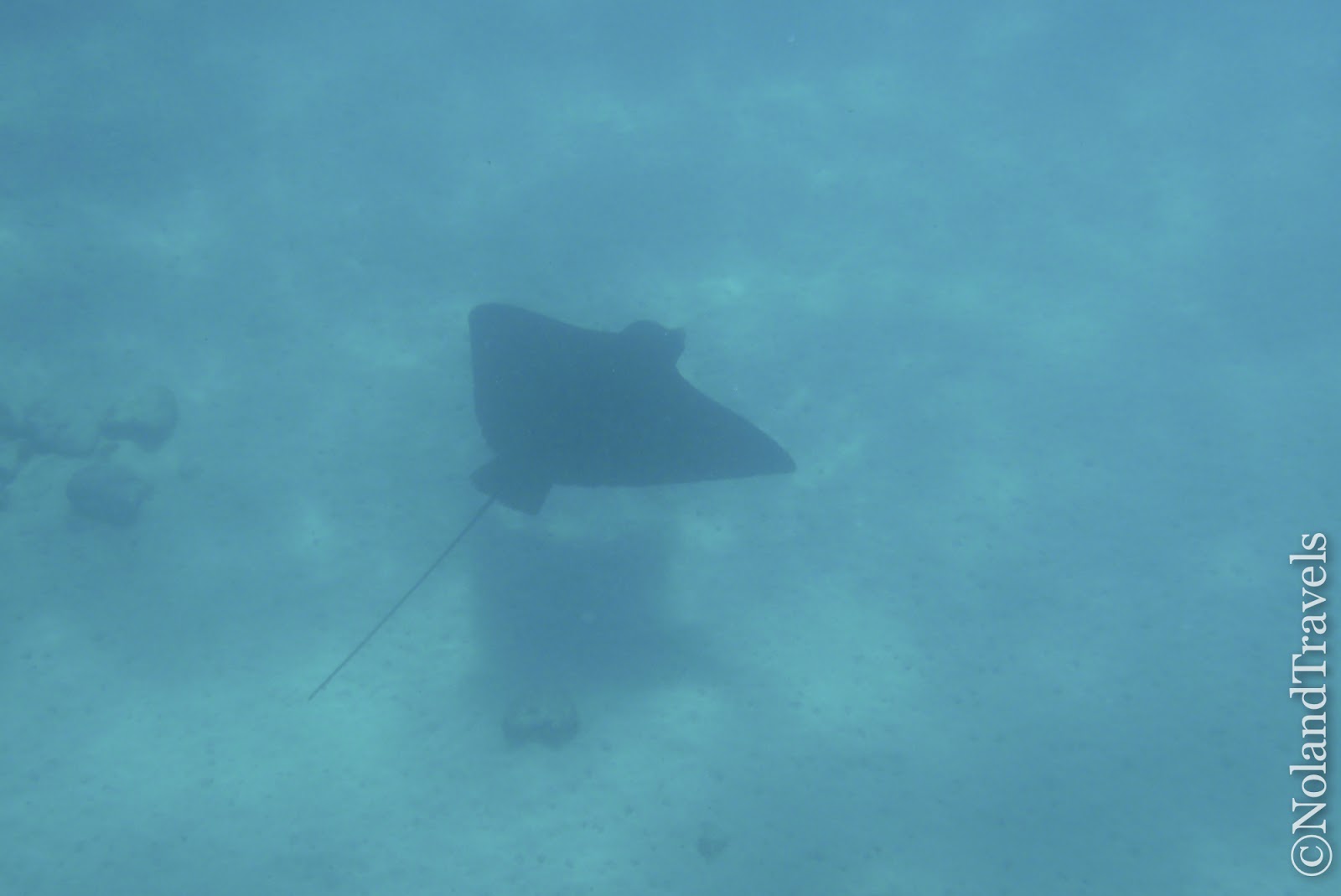 The anxiety really ratcheted up at this point because it was really our first experience swimming with sharks...multiple sharks, all at once!  With our guide leading the way the group at first was spread out but now we formed a tight cluster as we were all pointing and excitedly yelling underwater to each other about what we were seeing.  But the real excitement was still to come.

We were all admiring the sharks, and honestly starting to let a little fear creep in as we floated in dark water in the middle of the ocean with no ocean floor in sight. Then suddenly the scene below shifted again.  Steph shrieked underwater with her snorkel still in mouth - HAMMERHEADS!

There they were.  A group of 3-4 foot hammerheads (adolescents) right below us.  It didn't take long before the excitement within the group peaked and we all eagerly watched these incredible creatures swim past. You know that feeling where you want to yell and jump around from excitement but are nervous to not make a scene out of a naive fear?  Well, that was us, looking at each other for a brief moment, eyes wide open.

It wasn't the giant 8-10 foot variety you might see scuba diving, but they still had our attention and amazement as we were lucky enough to have a few minutes with the incredible creatures.

We couldn't believe our eyes...eagle rays, Galapagos sharks and now hammerheads all swimming around with the 6 of us snorkeling in the channel at Kicker Rock.  I'm sure there were fish too but they were lost in the excitement. 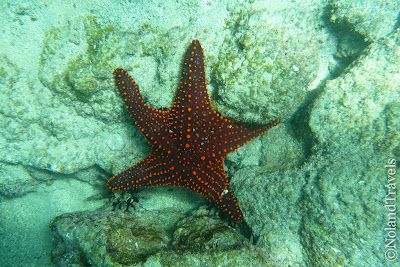 Before we knew it, they were gone.  What felt like an eternity was probably more like 2 minutes but it was an absolutely thrilling experience.  The only bad part, we left the underwater camera on the boat! Wait, What?!  I know, I know but that actually made the experience that much more enjoyable by not having to fuss around with an underwater camera - we just enjoyed the show!  The pictures shown in this post are some filler photos we took at other snorkeling sites.

We didn't see much the rest of the way around the rock back to the boat and were honestly ready to get out of the water.  It was a fairly rough surf, we were freezing and I think all of us wondered where the sharks had gone and what else loomed just out of eyesight in the deep waters.

Back on board we were all in a euphoric state.  Even our guide, Efrain, was buzzing and said he had never seen that many sharks there before, especially the hammerheads.

After not being able to dive, I had been a little bummed that we weren't going to be able to swim with the huge schools of large hammerheads the Galapagos is famous for but to my surprise, it worked out in the end and one of my bucket list items was complete...for now.  Plus, its a good thing we didn't' start with the big sharks, I was a nervous wreck with the small ones.  Steph and I were less than an arms reach away from each other for the rest of the snorkel.  It still makes me a little nervous now just writing about it. Ha.

With that being said, we have officially moved Kicker Rock to "legendary" status in our travel history.  It was an unexpected but amazing swim around the rocks!

Finally, below is a video of a Spotted Eagle Ray to give you an idea of how they move in the water.

Up Next: An Afternoon at Lobos Island to Meet Blue-footed Boobies