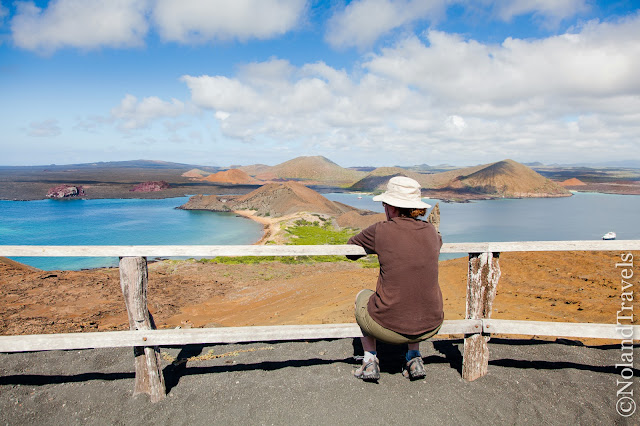 Bartolome was an island that Steph specifically sought out on our itinerary because of the overwhelming reviews it received from other travelers...and they weren't wrong.  It was all about the vistas and volcanoes that created them.


Before I get to the island, I want to talk about our good friend the sun, well, the strength of the sun. Coming from late winter in New York after being in full winter mode, we were pale and didn't come as prepared as we needed and thus couldn't avoid sun burn.  For starters we didn't bring enough sunscreen and ran out about 3 days into the trip.  Don't ask, we still can't figure out what we were thinking only bringing one bottle.  I guess the pack light mentality got the best of us.  We had to borrow some from our boat mates until we went back to a city a couple days later. So, learn from us, bring plenty of high SPF sunscreen because you will need it. 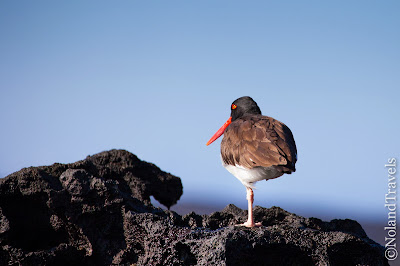 Even with 50+ SPF we were still getting sun burnt burnt. We each ended up with something red just about every day.  It almost became a game.  The following day apply extra sunscreen on the burnt spot and something else would mysteriously be red.  We ended covering up more even despite the heat.  You'll notice the big brimmed hats and long sleeve shirts, so be warned, the sun at the equator is strong! 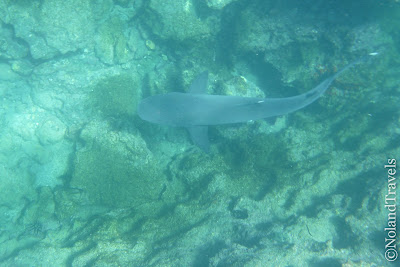 Back to the island.  We started the day with an early morning dingy ride to try and spot a colony of penguins that are known to breed nearby.  No luck.  However I did get a shot of this Oyster catcher resting on one leg which was fairly interesting with its bright red bill.

After giving up the penguin search we headed to the dry landing to embark on a light climb on the island to the top of the old volcano.  The fairly steep hike took about 20 minutes and was a small price to pay for an amazing overlook that the Galapagos is famous for.  Its the headline photo where Steph is sitting on the fence.  The colors were so bright with the desolate lunar looking landscape as contrast overlooking Pinnacle Point.


Bartolome is one of the "youngest" islands in the chain, somewhere in the neighborhood of 2 million years old.  This means not much plant life has really taken hold yet so its a pretty rocky and rough place.  A few salamanders and lava plants was about it. 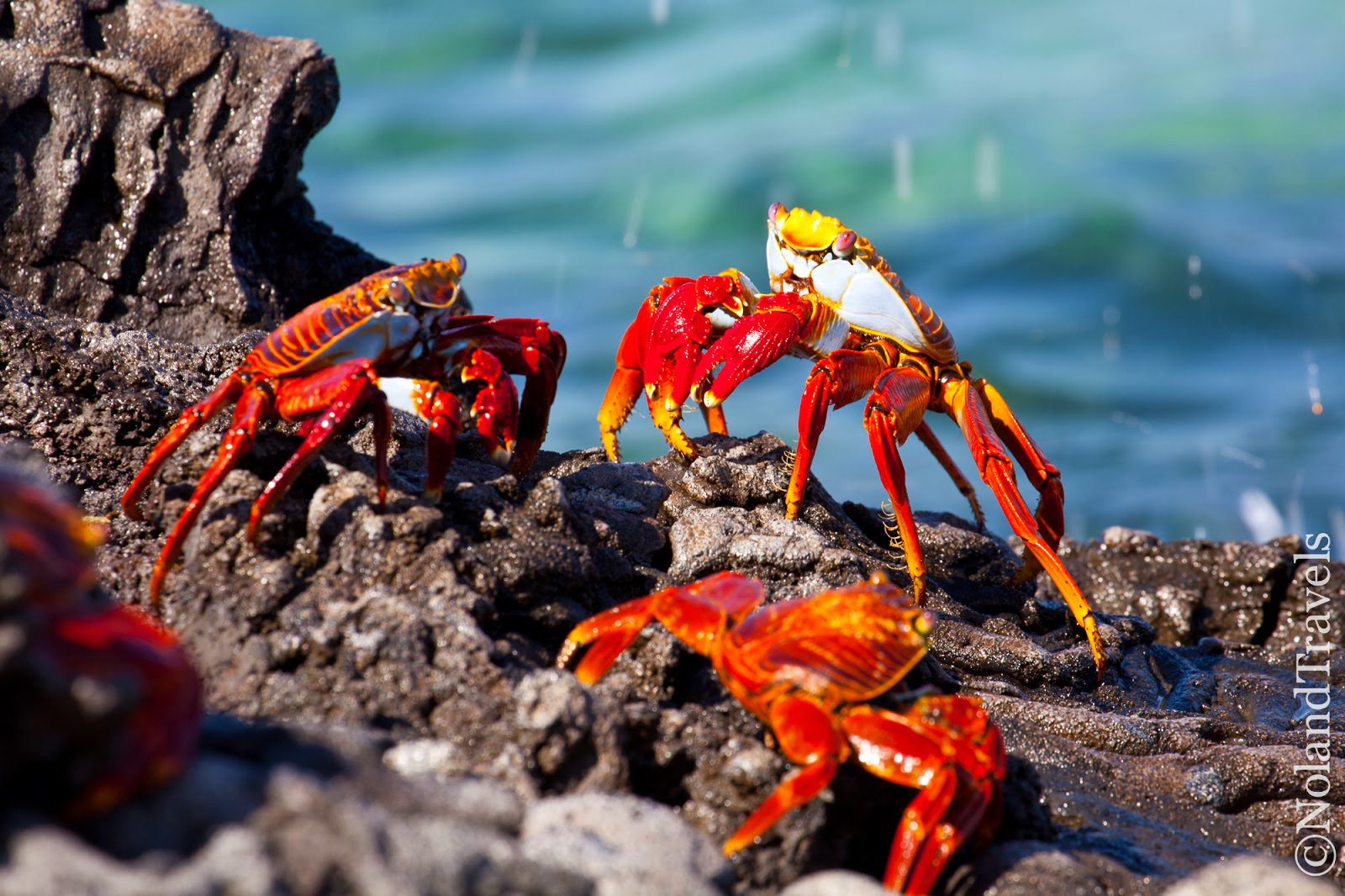 However, there is plenty of activity between the islands under. Splashing into the water after a short dingy ride we started another round of snorkeling. We ended up swimming around the rocks up to Pinnacle Point where we found some caves with white tip reef sharks in the shadows. With the waves crashing into the small cove we could only admire from a short distance away before having to move on.  Further into the swim we rounded the point and looked down to see one of the sharks swimming below.  He gracefully swam past as we admired him. 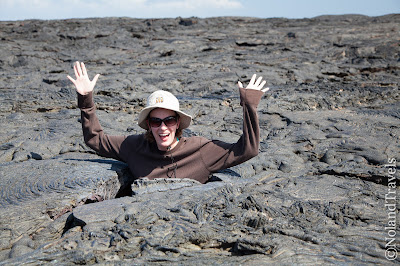 From there we headed to Santiago island's Sullivan Bay that afternoon where we hiked over a lava field that reminded us of the lave fields in Hawaii.  They are such a collision of texture and shapes that is fascinating to walk on. At times it can even look soft to the touch before you remember it is rock.  We stumbled on a shallow lava cave with a hole just big enough to jump in, hence, Steph chest deep in the lave field.

Finally, it was off the the nearby beach to relax for the rest of the afternoon. On top of a gorgeous white sand beach, there was a big colony of Sally Lightfoot crabs that kept me entertained.  The black rock, red crabs and blue ocean provided such an unique mixture of color.  Add in the constant motion of the crabs crawling around as only crabs can do, jumping from rock to rock, dodging the crashing waves while having territorial spats where the bigger crabs over power the smaller ones made for good viewing.

We will leave you with a few more photos of the spectacular landscape around Bartolomè island - uniquely Galapagos and truly breathtaking.

Up Next: Land Iguanas and Bachelor Sea Lions of South Plaza Island 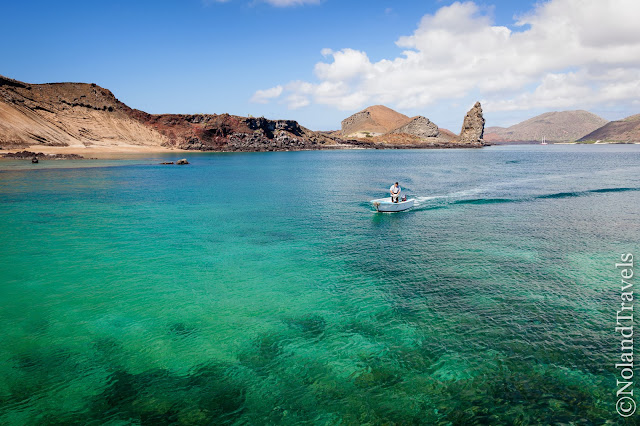 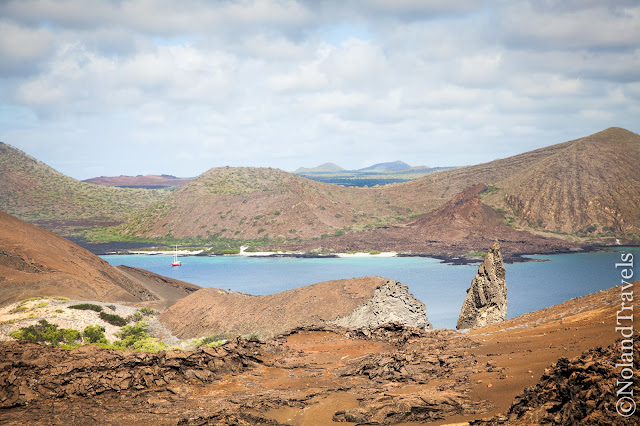 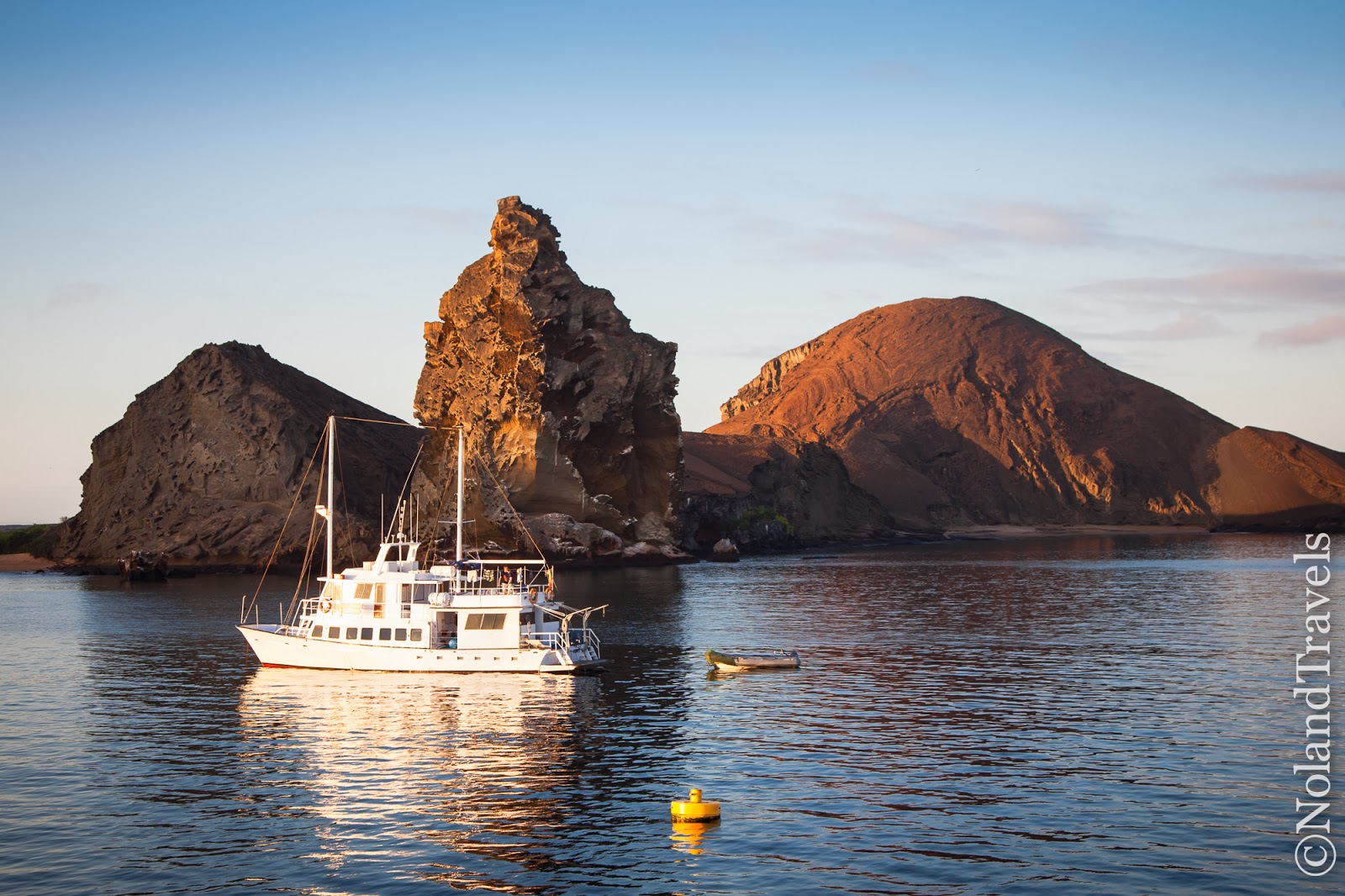 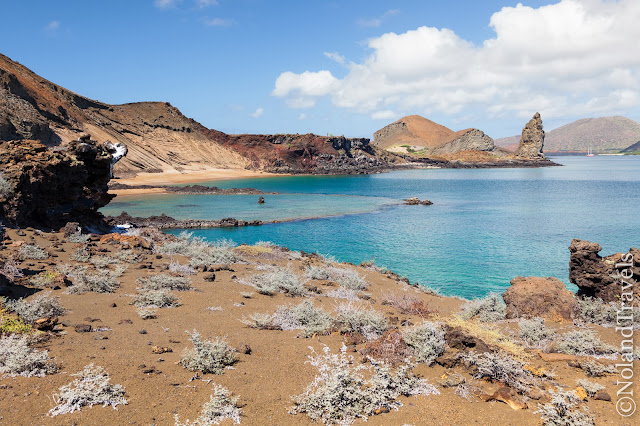