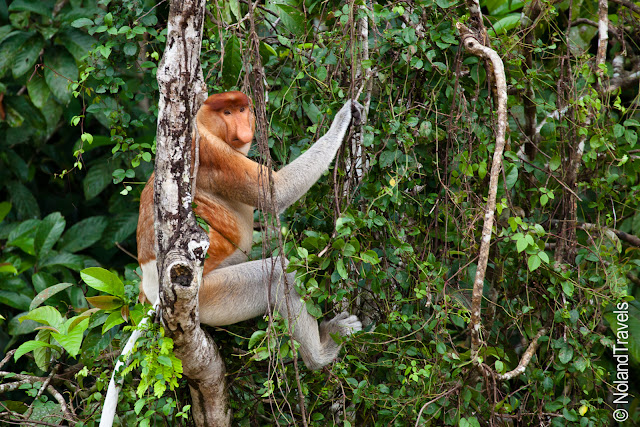 Kin-a-ba-tang-en River - good name, right?  Well, its not just a good name, its a primate spotting heaven - including Borneo's infamous Proboscis monkey which has some uncanny resemblances to little old men!


Experiencing the river was amazing.  Short of the jungle camps there isn't much in the area so its very calm and peaceful.  Twice a day you jump in small boats and cruise up and down the river with a local guide hoping to spot some of the wildlife: monkeys, orangutans, crocodiles, snakes, birds, and rare pygmy elephants, to name a few.

Before I get to the animals, a little more detail on the river.  On the island of Borneo, it runs through the region of Sabah, Malaysia.  The area around the river is a natural floodplain that fosters dense lowland forrest and mangrove swamps.  Couple that with some of the highest concentration of wildlife in Borneo and you make a great place to see some rare species in the wild.  Recently, a huge area of the river was declared a sanctuary to provide protection against some of the up river logging and palm oil plantations.  Its not National Park protection so existing enterprise can still continue but it does stop it from deteriorating further.  It's taken its toll on the north but the southern regions are still untouched. 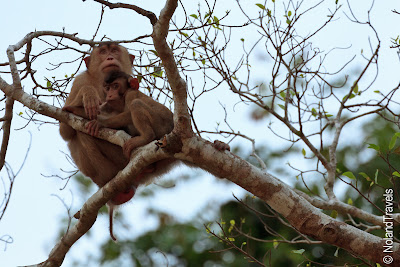 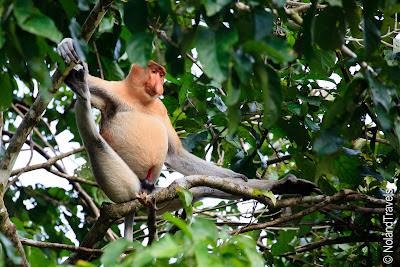 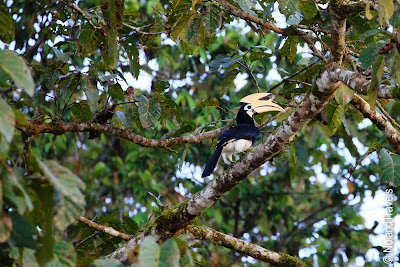 First things first, I want to see some primates.  Ok, well how about the Proboscis Monkey that can only be found in Borneo?  Its unique appearance, as you can see in the leading photo, is hard not to chuckle at as it bounds through the trees.  If you are lucky, then you can also see an elusive wild Orangutan.  If that's not enough then you can also spot heaps of long and short tailed Macau monkeys and gibbons.

The Proboscis Monkeys probably provided the most entertainment for Josh and me.  They were fairly common in this area and their appearance - well, it's just plain funny!  Big noses, the look of toothless mouths, pot bellies and saggy arms and legs make them look like little old people.  We also came across a "bachelor tree", as the guide called it, full of young males.  Their noses weren't all fully grown yet but they were literally showing their stuff to the ladies across the river in other trees.  Should we put a black censor bar over that?!

One of the reasons the area is so good for wildlife watching is because most of the primates make their way out of the jungle in the evenings to sleep in the trees on the river bank.  The guide explained that they will sleep in a riverside tree facing the jungle so they know nothing can sneak up behind them while they are sleeping.  The afternoon cruises set off around 4pm and by 6pm the trees on the river bank are filled with groups of monkeys.  Just imagine the sun setting after animal watching for a couple hours, speeding back to the lodge to get back before sunset, wind in your hair, spotting family after family of monkeys in the trees.  We were lucky enough to spot all of the species I just mentioned which isn't all that rare in this region.  The monkeys are consistently seen but the orangutans can be elusive - unlike monkeys, orangutans live a solitary life so spotting a single orangutan is a challenge in the thick mass of branches. 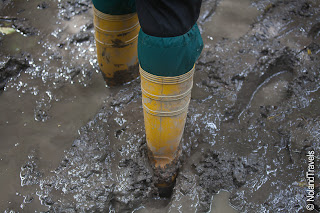 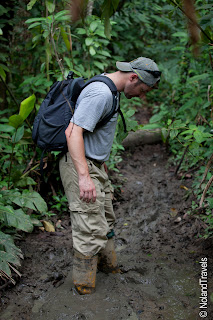 Exploring the jungle by boat was one thing but exploring it by foot and at night were something completely different!  The lodge had recommended we use their wellies and we soon found out why - my mention to the floodplain above was for this reason...it was a swamp!  With our head torches held in our hands (so that bugs don't fly directly at our face), we staggered through calf-deep mud to explore the jungle at night.  Since I'm a little jumpy with bugs, I was more than happy to gear up in the recommended long pants and long sleeve shirt to keep anything from touching my skin - although it was still quite warm out!  We found a couple sleeping birds, a really big tiger leach (still on the leaf, thankfully) and some other creepy crawlies.  I also found that my waterproof wellies were in fact, not waterproof as both of my boots flooded with murky swamp water - not nice!

The next morning we had the jungle walk after the morning boat ride.  Again, we donned the wellies (a different pair), and set off in the depths of the jungle.  Because the monkeys hide in the depths during the day to keep cool, we somehow weren't expecting the intense heat.  The density of the forrest meant that little to no breeze got through to us on the ground so we were literally sweating buckets.  We didn't encounter any exciting wildlife but it was an experience to trek through such a steamy jungle environment.  We were able to explore up close the environment and particular trees and fruits that monkeys thrive on.

Our jungle lodge was basic but good.  We had a small hut with an attached bathroom, just big enough for 2 twin beds and a fan.  The rest of the camp included an open air eating area (complete with roof for the frequent rainforest rain) and another small common area where you could use the wifi and relax.  The scheduled activities included the boat rides, jungle treks and night jungle walks.  The afternoon is free time mainly because its so hot and humid you really can't function being out and about that long.  Plus the animals are deep in the2 coolness of the jungle which all added up to make a good time to take a nap.  I'm sorry to say that some how we didn't get a photo of the hut, but here are a few from other travelers that show the outside of the hut and the inside of the hut.  I guess the days were just too busy with activities and napping!  But here's a shot of the river during one of the cruises for good measure. 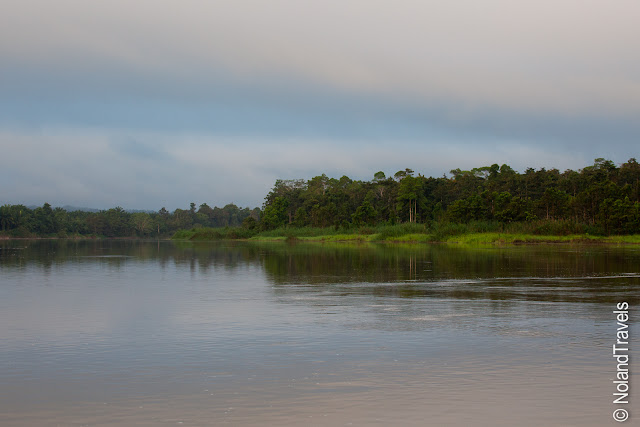 On the second night, we both opted out of the night walk in lieu of resting and trying to make onward travel plans.  I had gone up the area with wifi while Josh was napping and just as I was about to finish an email, close the laptop and head back to our hut, the heavens opened up!  I'm talking full-on, almost flash flood rainforest rain...and it kept going.  Nearly twenty minutes in to the heavy rain, with no sign of slowing, I was really hoping Josh would come rescue me.  It was pitch black and pouring - there was no chance I could make the mad dash with our laptop.

There was young couple that had arrived that day and the husband was sitting next to me reading during the downpour.  Just after I had made my silent prayer for rescuing, his wife turned up in her full waterproof gear and stated with obvious frustration "Where have you been?  Didn't you think I would be worried about you?".  After he made his feeble excuses, to make light of a potential start of a marital fight (I think they were on their honeymoon), I laughed and said how I was just hoping my spouse would turn up with my waterproofs...and asked if she brought his.  Oops - she hadn't.  And about a minute later Josh emerged from the darkness, my knight in glistening waterproofs - handing me both my waterproof jacket and pants.  Thankfully the heavy rain on the tin roof of our hut had waken him and he came out to save me!

So, with a full day and a half of adventure now over, we hit the sack.  Even though our morning cruise that morning had been completely uneventful as all the monkeys had already left the water's edge due to the intense morning heat, we definitely wanted to go again.  Little did we know, thanks to the rainy night and cooler weather it would be a spectacular morning cruise... 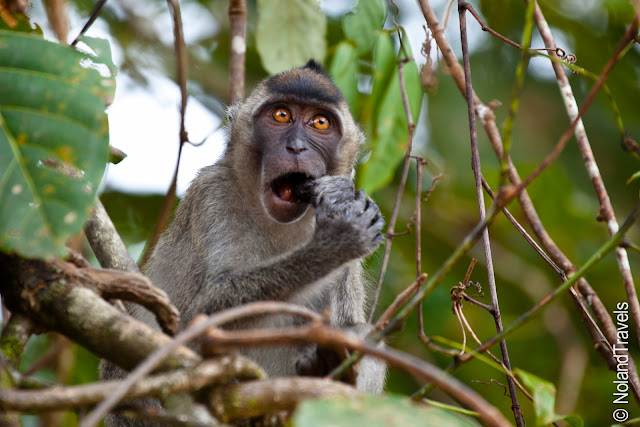