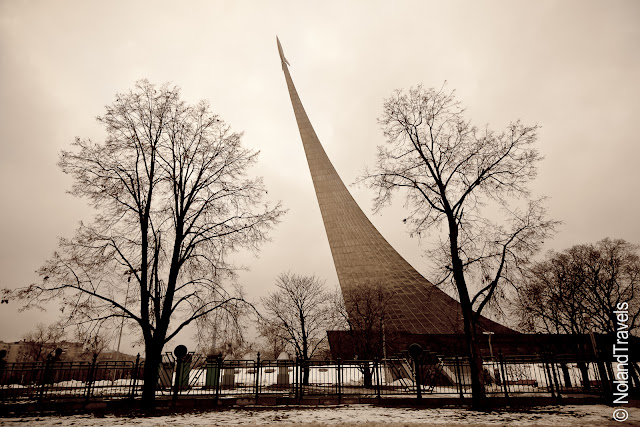 Even though there is enough history, beauty and entertainment to keep you busy around Red Square alone, we did venture a bit further out!  Half the fun of this was using the public transport - their metro system is clean, efficient and has some of the most grand stations you will ever run across.  I'm talking chandeliers, paintings, fancy trim, marble and more!

While flipping through the list of "things to do" in Moscow we were both intrigued by the Cosmonaut Museum.  I attended Space Camp as a kid in Huntsville, AL and Josh and I both have toured the US Space Museum there.  We thought it would also give us good insight on the space race from the other side. 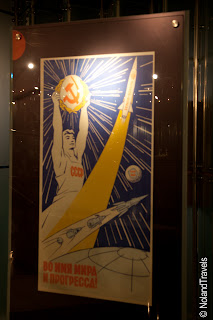 The building itself is mainly underground but topped by a huge pinnacle monument with a rocket on top.  It was opened and dedicated on the 20th anniversary of the first manned space flight.  On arrival, Josh was less than pleased to find us waiting in yet another unreasonably slow line in the cold, but he kept entertained by photographing the neat monument above the museum.  The museum itself was a bit of a let down, mainly because everything was only in Russian.  We did recognize a few things including two stuffed dogs that were the first of their kind in space, along with one of the first satellites in orbit and just a generally noticeable progression for space travel and getting to the moon.  There were a lot of references to NASA which indicated a shared goal which was cool to see.  However, we just didn't get the insight we were looking for.  We're going to have to read up on it and hopefully that will add more flavor to what we saw.

Next door to the Cosmonaut Museum, we saw a stream of people filing in to this large park entrance.  After consulting the guide book we found it was something called the All Russian Exhibition Center - described as being built to glorify the ideology of communism and socialism and occupying a mass amount of space.  Inside were more than 400 buildings and across a space larger than the Principality of Monaco.  We had no idea what we'd find but we had to check it out.

It was a serious throwback of times past.  Every building was built in a tribute to some aspect of communism or socialism.  From agriculture to engineering to the state itself.  The pictures do more justice than words. 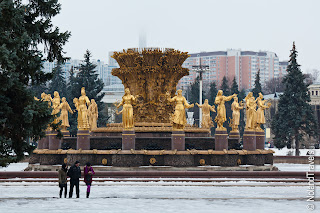 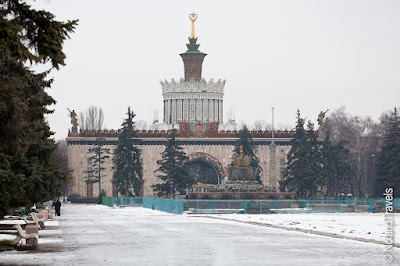 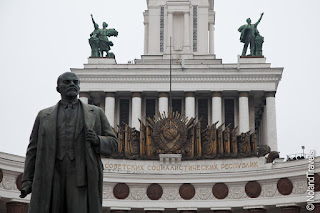 As it turns out, its actually a permanent general trade show park.  Each building has vendors in it offering various things from electronics to fur coats.  We had good fun going through the buildings; the only useful thing we picked up was a travel sewing kit!  Go figure - all that neat stuff and that's all we walked away with!

Exploring the park was an interesting look back at the old Soviet Union.  Is it me or is the hammer and sickle embedded in buildings a fascinating piece of history?  Anyway it was a good day out trekking through the park, watching the locals (techno music blaring and girls on stilettos on ice) and taking photos of the many interesting buildings.

Here is a short video clip of the techno music that was blaring at some of the trade show entrances.  Very entertaining...

As the daylight started to fade in the park we realized our time in Moscow was quickly coming to an end and we headed back in to city center to try for an epic ending to an epic city - a visit to the famous Bolshoi theater...