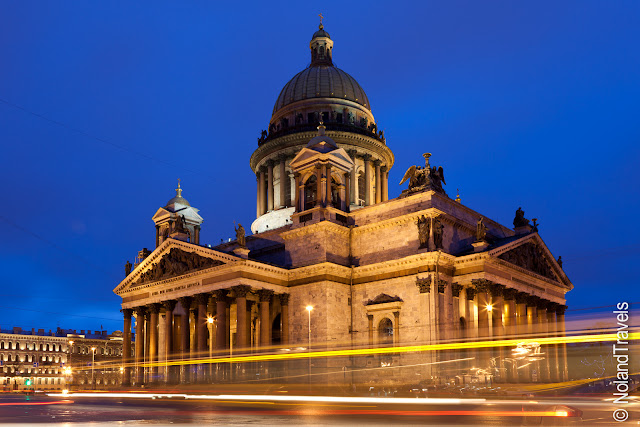 Peter the Great, the city's founder, was an admirer of Europe and thus planned his city to be the Russian gateway to Europe.  All throughout the city you will find impressive architecture and and wide boulevards including the fabulous Nevsky Prospect (famous shopping street) which you can see in the photo on the right.  It does not disappoint - it is very beautiful indeed.  There is also an interesting canal system much like Amsterdam, as the city was originally intended to be traversed by water alone which adds an interesting dynamic. 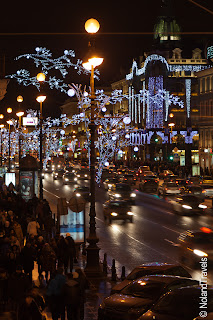 Strolling around, it had the feel of other European cities, minus the cold weather and excessive amounts of fur coats and hats!  Being so far north, the daylight hours this time of year were short.  All of the street lights were synchronized to go off around 10-10:30am and come back on again before 5pm.

Our time here didn't get off to the best start.  With the hectic December coupled with jet lag, frankly, we were already tired!  On arrival the night of 2 Jan we were a little bit disappointed that there wasn't any snow covering the ground like we'd imagined (and planned for with thick coats, winter boots, thermals, gloves, etc) and the first restaurant we saw driving away from the airport was a KFC.  We just can't escape that chicken place.  Then the next morning, Steph woke up with a headache - not good.

However, despite all that, our first day in St Petersburg ended up being a real highlight.  We had a scheduled walking tour of the city and our guide met us at the hotel that morning after Steph gingerly ate about a third of an apple and was feeling a bit better.  To our surprise, it was snowing!  It continued to do so for the full 3 hours of our tour and at times was very heavy snow.  The first real glimpse of St Petersburg with snow coming down was absolutely magical.  It accumulated fast and soon everything was covered, including us!

After the tour we ducked into a small cafe to brush off the snow and grab a bite to eat.  One travel lesson we are just now taking to heart is that when eating out, pictures of food are a good thing!  We've always been weary of places that had menus with pictures, thinking of them as cheap and touristy, but it is something we now relish in lands where the language is so far different from our own.  Check out the menu below, hmm, any guesses.

Luckily the lady behind the counter was very friendly and spoke just enough English to help us out.  Not a bad meal as you can see below for not being able to decipher the menu.  Good hearty beef stroganoff and some vegetable soup. 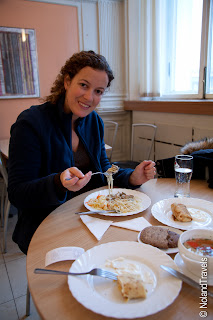 One early observation in Russia is that when it snows, people just carry on.  The transport doesn't shut down, the stores don't get raided for all of the bread and milk, and people don't stay home.  Even the women don't seem to change a thing.  They don't even flinch at icy snow-covered sidewalks in high heels.  They always seemed well dressed in fur coats or trimmed hats, short skirts or dresses no matter what the weather!  Very impressive.  We watched in awe as girls walked on ice in their heels!

Not to be out done we tried to do the same (minus the heels, of course!).  Even though it was cold and snowy, we did most of our touring by walking around.  It seemed the only way to do the city justice.  Strolling through the streets with grand buildings all dressed up with Christmas lights and trees.  Plus for the photographers in the group, the blue hour was amazing  (early sunrise or late sunset)!  It would go from serious grey to an amazing deep blue as you can see in the main photo.  The tripod has definitely come in handy!

A little vodka for dinner and the day was complete.  Snow, Russian sights, language troubles, fur coats and vodka!  A good Russian beginning. 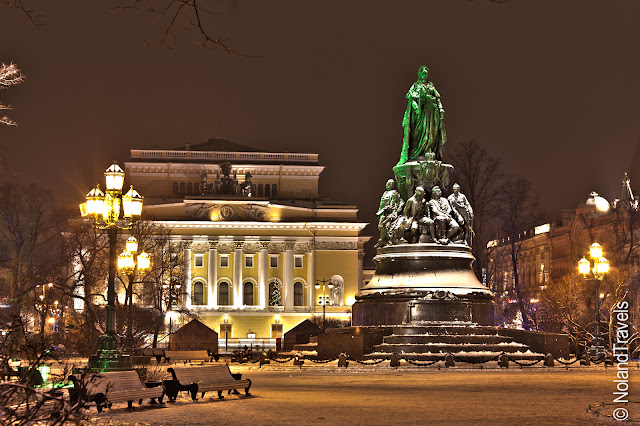