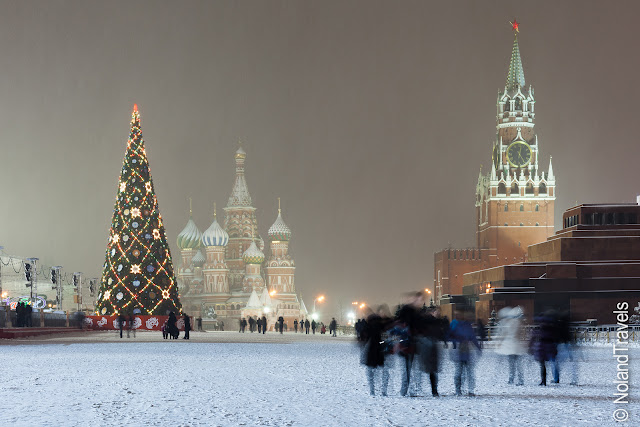 What is there to say about Moscow's Red Square.  Simply, its impressive.  After seeing it from photos of world events over the years, it doesn't disappoint.  As you enter through the brick gate structure, you immediately see Ivan the Terrible's St. Basil's Cathedral with its unique colored "onion" domes.  Some say it's the most recognized building in Russia.  Then your eyes move to the right focusing on the huge red brick wall running the length of the square, guarding the Kremlin with Lenin's soviet era looking square mausoleum sitting at the base.  Next, the tall towers at the corners come into focus, with the glowing red stars on top, the taller one with a clock declaring Moscow time.  Swinging back left around the square you pass St. Basil's when you notice the long shopping arcade that runs the other length of the square, Gum, outlined in white lights.  It has a glass roof and is filled with everything from average food to expensive designer shops (hot tip: tasty and reasonably priced food on the top floor and free clean public restrooms).  Finally, moving back towards where you are standing you notice a small cathedral to your left and then the red brick, Gothic style State History Museum on your right.  The entire square is paved with a cobblestones.  On top of that for Christmas, there was an ice rink and Christmas tree in the center of the square.  Very cool indeed! 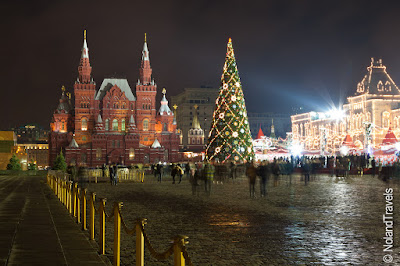 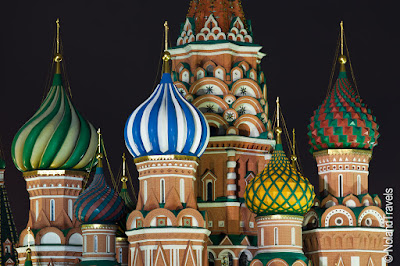 Josh's introduction to Red Square was after my own.  In a strange near repeat of St Petersburg, Josh got ill on arrival to Moscow, so I attended our scheduled walking tour alone.  That gave me the honor to introduce him to the square that night when he was feeling better and it was twinkling in Christmas lights.  The sight definitely lifted his spirits!

We spent a good deal of our time in Moscow in and around this square - there is literally so much to see! Plus we were lucky enough to see it in a few different conditions and this snow covered shot at the top is one of our favorites.

One of the more memorable sights was surprisingly Lenin's tomb.  Just getting to see him is tricky business.  You are not allowed to take anything in with you.  No camera, no water, no bag, no phone, nothing!  After handing over almost every object on our person to security we went through metal detectors and a full pat down.  It really ups the curiosity factor with this much security...what are we about to see?  Sometimes while touring rules can be bent or broken, but not here!  There were fully armed military soldiers every 5 feet all making sure the strict rules are followed.  You must keep moving, no stopping!  Its unbelievably creepy as you descend down the stairs and turn the corner to the cool dark room where the body is displayed, lit by an eerie rosy red light.  There is a viewing platform on 3 sides about 5 feet away from where his body lay.  Behind glass, there he was, eyes closed in a suit with his arms straight out, hands resting on his waist.  You could still see the hairs on his face and the texture of his skin.  All fully preserved.  The only thing that comes to mind is creepy!

And strangely enough, its free to get in but costs money to store your personal belongings for the 10 minutes you are in the tomb and walking the grounds. 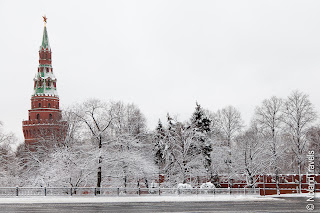 Not surprisingly, some of the locals are a bit skeptical of the tomb, many thinking the body is a fake.  It actually might soon be closed down and Lenin buried as he originally requested.  They thought it would have been closed previously but no one wanted to make the decision with upcoming elections (in late 2011 and early 2012).  However, many feel its only a matter of time.  Are we some of the last people to see him?  Who knows - only time and Russian politics will tell. 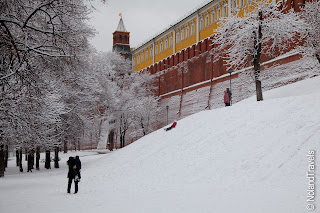 A visit to Moscow wouldn't be complete without visiting the Kremlin.  So, we obliged and paid the astronomical entrance fee for foreigners to see The Armoury ($25 per person and that was only for The Armoury section of the Kremlin).  This is where all of the treasures of Tsars past are held.  With a fresh coat of glistening white snow, we went through the gates into the inner section of the Kremlin.  As you can imagine, housing the nation's most prized possessions, it was done up in true Russian fashion and beyond amazing.  Jewelry, china, serving pieces of all sizes, bejewelled Orthodox bibles, ornate furniture, fascinating weapons, armor, lavish fur trimmed regal robes, stunning small-waisted (female) clothing, crowns, septors, thrones, horse-drawn carriages, horse-drawn sleds (awesome, right?!), carriages for the children and the unforgettable Faberge eggs!  I almost had to beg Josh to pay the ticket price but afterwards we were both well and truly impressed!

We did venture beyond Red Square - and half the fun was actually getting there on the impressive subway...!
Posted by Unknown at 3:00 AM