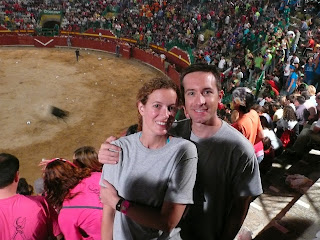 After a 4 hour bus ride south we arrived in Valencia. It was now time to prepare for our main events of the trip: La Tomatina (the main event) and the Water & Wine Festival (and add-on event that our tour company offered). We arrived in Valencia around 3:30pm and our first event started at 8pm. So after a little last minute shopping it was time to depart by bus for the all night water and wine festival in Requena, just outside of Valencia, to celebrate the town's grape harvest.

This is a local festival that our tour company has sole access to which basically means our group would be the only foreigners at the festival. The locals keep the itinerary fairly hush hush so we did not know exactly what was going to happen. The tour guides said they usually have all of the local bands play while leading everyone through streets of the small town, with trucks providing free red wine all along the route (BYOV - bring your own vessel - aka cup) and some of the locals stay up in their balconies and dump water on the passers-by. To elicit a water dumping or hose down you are supposed to stand under their balcony and chant "agua, agua, agua!" Hence, the reason its called the water and wine festival.

When we arrived we made our way up through the old town of Requena where what appeared to be the town mayor was blessing the wine harvest after a series of fireworks. Then we heard the bands playing some where in the distance. Fortunately, we were hanging our with one of the many tour guides and she said they may be at the bull ring. Bull ring? Yes, the town had its own bull ring - it looks like a mini coliseum.

The four of us (Steph, tour guide girl, an Aussie guy and I) ran up to the entrance to try and get in but noticed everybody had tickets to get in. Since it was so hectic and so many people going in all directions the tickets didn't account for much because we were able to sneak in. Yep, sneak in! Here's how:

Standing there wishing we could get in, our Aussie friend said, "I'm going in". He had found a corner of the yellow dollar-bill-sized tickets on the ground. He got in line, held up the ticket corner and just walked in with the crowd of locals entering (it was quite obvious that only locals had tickets to the event. We thought he only got in because he had dark hair...a tall blond Aussie might have stuck out a bit more! ha!). After the shock factor of him just waltzing in wore off, we decided we had to try and get in as well. The tour guide girl took a piece of paper and tore it in to 3 ticket-sized pieces. We ran to another entrance and while the people taking tickets were distracted tearing tickets of others, we just jumped right thru the barrier. Nice moves, huh?

Since it was really full we had a bit of trouble finding seats but eventually wedged our way in. At this point the crowd was already rocking, singing and dancing to the bands (brass and percussion) who are all wearing different color shirts like teams, spread throughout the ring. They took turns playing different songs as the music blared around the ring and you couldn't help but join in, especially on the O'le...O'le O'le O'le...Ole chants! The atmosphere was amazing as everyone eagerly awaited the featured attractions, the bulls.

Now, before I go to much further let me clarify that we knew in advance this was going to be a "fake bullfight". Or "play bulls" as the tour guide said. No bulls would be injured in this event, but people might and funny enough, they were (I thought it was funny, but Steph did not). Basically they bring a bull out and young men run around the ring baiting the bull who chases them as they then hurdle the side wall to get away. "Play bulls" are small bulls. They looked big to us but the guide insisted they were maybe a third of the size of a full-sized bull fight bull. And mind you, the guys out in the ring are amateurs so small bulls is the only way to go. Here is a short video of one bull running around the ring.

By our count there were around 10 bulls on display, one at a time. There were a few close calls with huge "oohs" and "ahhs" when a guy would narrowly avoid being taken out. It all went fairly smooth with only a couple of guys getting hit by the bulls but quickly jumping up with huge cheers. That is until Bull #8 when this poor guy was a little too daring and got absolutely hammered by the bull. He got hit, flipped, knocked down, and trampled on. OUCH! You could tell he was passed out when the bull was done by the way his limbs just flopped like a doll. Luckily all his fellow dare devils came to his rescue to distract the bull as they drug him out of the ring and over the wall while he was still unconscious.

Don't get too worried. There wasn't any blood and he didn't get gorged but I highly doubt he made it without at least a couple broken bones. Strangely, the crowd watched as he disappeared within the arena walls, then the bands took up playing again and out came the next bull. I guess the crowd really understands that that's the name of the game.

There was also one really good guy who a couple times was able to wait for the bull to charge him, then put his hand on the bulls head as it lowered to buck him and then jumped over the bull - NICE! Too bad I wore flip flops. I could have hurdled a bull!

After 10 exciting bulls, the show was over. Everybody exited onto the streets where the bands were all playing next to a tanker truck full of red wine hosing people down. I'm talking firefighter water hose amounts of wine flooding the crowd. It was quite a site and great way to start the parade! (And what a waste!) Check out this quick video.

What's interesting is that the entire town takes part in this event. The younger generation does the walking and most of the wine drinking while the older generation watches in laughter and dumps water from their balconies after the agua chants. Even old gray-haired ladies had their hoses or buckets out dousing the people below with water. One particular sweet little old lady was out on her balcony looking down at everyone with a "you all are nuts" kind of look, then stepped inside her dark apartment only to emerge with a big bucket of water! I bet she paraded in her glory days! You could tell she was having fun!

Coming up on 1:00am the parade started moving through the streets, music blaring and everybody singing and dancing. To top it all off free red wine was given out through the entire parade route. There would be a big yellow truck with a huge container of wine with people taking cups and filling them up for you.

At one point I ended up getting my shirt ripped into a toga as a couple of locals, whose shirts were also ripped as this is somewhat part of the tradition, looked me up and down motioning to my shirt then they all grabbed hold and ripped it for me.

After parading down many streets amongst multiple water dumps and hoses, it was now 3:30am, time to catch the bus back to Valencia for tomorrow's show, La Tomatina. Back to the hotel by 4:30am and on the bus to La Tomatina by 7:30am. Sleep? Who needs sleep? Steph's only concern was that she was going to stain the hotel pillows with her wine-dampened hair...and when you are about to participate in a huge food fight within mere hours, a shower doesn't get put high on the priority list! :)

Apologies for the poor photos in advance.

Photos of the water and wine festival
Posted by Unknown at 12:28 PM