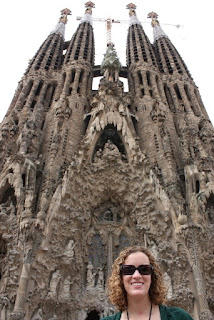 We woke up early to make it to La Segrada Familia (pictured) - a cathedral Gaudi started in 1884. If you are not familiar with Gaudi's style the easiest way to put an image in your head is that his buildings often look like he was living in the 1970's and he was high on something.

His style was modern beyond even today's standards - often colorful and fairy tale like. La Segrada is no exception. It is a monumental church that will eventually hold 13,000 people and is planned for completion around 2026. From a distance it looks like a sand drip castle, but once you get closer you see the immense and surprising detail of amazing sculptures and colorful fruit bunches at the tops of the spires that make it looks almost like Candyland. And the inside is no different - intensely colorful stained glass windows and windows in shapes you have never seen on a building. Columns that defy normality and look like stone trees supporting the vast space.

Just as we were about to label Gaudi a true crazy, we came upon the part of the tour that showed how all of his unique and modern shapes were all derived from nature....tree trunks, honeycomb, leaves...and all the science that goes with it. He conjured up architectural masterpieces from natures' inspiration - and it is all truly magnificent. We vote this one of the most amazing structures we have ever seen in our life and plan to make a trip back in the 2020's to see it in it's completed glory.

After seeing Gaudi's masterpiece we moved on to go see Park Guell (designed by Gaudi) and two of his more popular apartment buildings La Pedrera and Casa Batllo. Park Guell was truly Candyland. It was originally meant to be an exclusive area for upscale homes but that plan never caught on - but Gaudi had already created a magnificent welcoming to the area in the form of two unique houses flanking the metal entrance gates, with dream-like stairs leading to a flat area with a wave shaped bench stretching the whole edge of the platform made from a beautiful mosaic of colorful tile. Only pictures can do it justice.

We took a break at the park and enjoyed a picnic of bread, jamon, cheese and fruit that we picked up from the market that morning.

After taking in Candyland, we moved on to see his famous apartment buildings including the house of bones....the strange thing is that they were built so long ago and they stick out like sore thumbs in the city blocks - but they are unique. Again, only pictures can do them justice. We only admired these buildings from the outside although we hear the insides are just as unique. After a long day of walking, we started heading back towards out hotel.

I mentioned yesterday that we would come back to the city being walkable...well, it is but it's easy to walk too much. Steph's left foot was really starting to hurt - she limped out of bed on Day 2 and by end of Day 2 was limping nearly every step. We are going to call it a muscle strain because by the end of Tomatina (in a couple days, her foot was good and swollen...and this blog was written by Steph flat on her back in bed with her foot propped up!)

Although we had an early bus the next morning to Valencia, we attempted to go out. There is an infamous bar called Kentucky that we went searching for. Unfortunately, we found it with a sign saying they were on holiday til mid September. We tried. On to Valencia......!

I posted a few of our Barcelona photos with more to come when we get back.
Posted by Unknown at 8:14 AM