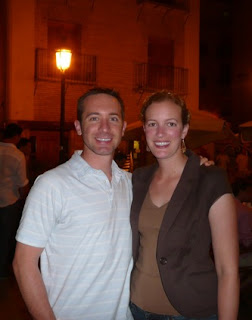 With the past few nights, including Barcelona, our bodies were starting to adjust to the late Spanish lifestyle. Our last night with the tour group was no exception. We started the night (after showers and our nap) at a local restaurant in Old Town Valencia. Here we met up with 2 couples, also in our group, from Ireland. Valencia is famous for Paella so we all tried to order our own Paella. The only problem is house rules wouldn't let us each order our own as its made-to-order so we had to order one huge paella for 6. We settled on the Paella Valencia made with chicken and rabbit. Fantastic! (the other option was the seafood version....squid, octopus, who knows what!)

After a few other stops along the way we found ourselves at the beach some time well into the morning. The night club that the crowd ended up at was a little too much for us. So, we wandered off from the club on to the beach. The silky soft sand and the warm breeze made the perfect setting for light snooze under the stars.

As Steph previously mentioned this is the point in the trip where our late nights and strenuous activities started to catch up with us. On top of Steph's bum foot which has now stayed swollen and very sore I've come down with a sore throat and just feeling sick with a headache and weakness. Eek. Not the way we envisioned spending our last day in Valencia before moving onto Madrid.

Before we left Valencia instead of touring some of this sights we limped to the beach and spent most of the day resting up soaking in the sun. Poor us, I know...

For dinner we weren't up for much so instead of going into the old town where all of the night life was supposed to be we decided to explore the streets around our hotel where we found some incredible tree lined streets filled with local Spaniards enjoying the lovely evening which brings me to one of the things we have enjoyed most about Spain. The evenings! They are so nice with comfortable temperatures, great outdoor spaces to enjoy and plenty of night life to keep you busy.

So back to dinner. We found a great little Spanish restaurant serving tapas with an open table outdoors. The staff spoke very little English and we stumbled through the menu ordering a few tapas dishes we recognized including what I thought was steamed mussels. Turns out I didn't order mussels but snails. So after trying to figure out if we were going to eat the snails one of the staff that could speak some English came over and we were able to tell her we wanted mussels and not snails. It took a few hand motions of trying to cup our hands like little mussel shells but we got the dish switched out. We also had a steak tartar dish which I think has been throwing my stomach for loops since. In any event it all worked out and was a good (Steph's interpretation: interesting) dinner.

The next morning we woke up thinking we felt better so we headed out to tour some of the sites we neglected but to no avail. Carrying our backpacks we didn't last very long and headed to the bus station to catch the bus. Bum-foot-Steph and sick-feeling-Josh aside, Valencia was great and we could see ourselves going there again!
Posted by Unknown at 12:30 PM