La Tomatina - Anybody for Tomatoes? 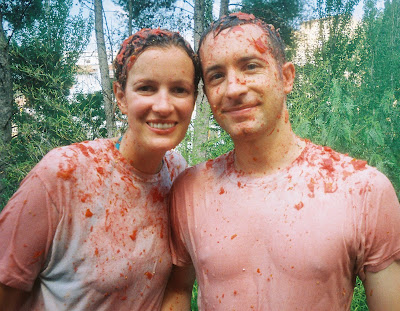 The wake up call came bright and early after only 3 hours of sleep but we got up, threw on our grungy clothes and boarded the bus to the small town of Buñol where La Tomatina is held.

First, let me say a little about La Tomatina for those that may not know about it. La Tomatina is really only 1 hour of a week long festival in Buñol, a town of only 10,000 people. For that hour trucks drive down the main street dumping who knows how many hundreds of thousands of kilos of tomatoes for some 40,000 people, mainly tourists, to throw at each other. The fight is only on the main street of town where shop keepers and home owners have to board up windows/doors and tarp up their building and balconies to keep out the tomatoes. The fight does not begin until someone is able to climb a greased pole to reach a ham at the top which usually takes hours. When this is done a big canon is fired signaling the start of La Tomatina and water canons then starting soaking the crowd as the tomatoes are delivered by trucks that drive through the crowd unleashing the all out war!

There are 3 rules. Squash tomatoes before throwing them. Only throw tomatoes. And stop throwing when the canon fires after 1 hour. How much of that was adhered to??

At the arrival meeting our tour guides stressed that this was a "full on event"! Most of us said ah, we can handle it not realizing what we were about to get ourselves into. From experience I can now say they were right. The street got so packed that you could not move. You couldn't leave if you wanted to as there is no where to go so if you don't like tight spaces, then stay away. The street is so narrow, maybe officially a lane and half wide, and there are so many people. One not-so-fun tradition that the organizers of Tomatina warned us about was the t-shirt fight. While waiting on the tomatoes shirts are ripped off by groups of guys then are tied in a knot and heaved into the crowd. I can tell you from experience that when you get hit in the face by a wet and nasty shirt it STINGS! Especially when you can't see it coming or raise your arms to block it.

On the other hand, squashing the tomatoes before throwing them usually held true. The only exception is for a few tiny green tomatoes that are too tough to squash which aren't fun to get hit with either.

Now back to the event. I'm having a hard time finding the words for how many people were packed in the street and how LITTLE room we had to maneuver. At times the crowd would surge and you just had to go with the flow. It would move you to the left, right and even move just the upper half of your body. You could not stop the surge. which was at its worst when the trucks crawled passed to deliver the tomatoes. There was no room before and even less room while they were there. I'm not talking pickup trucks here, I'm talking garbage size trucks with dump beds making their way through an already sardine-packed crowd. I don't know how people didn't get run over. You would sometimes be 10 feet from where you were after the crowd parted to allow the trucks to pass by. You just had to move with the crowd.

Once we got some tomatoes and into the fight it was an absolute riot. It was such a laugh to be covered in tomatoes. Then with a fist full of tomatoes I couldn't help but find a bit of ruthless pleasure having the opportunity to pick some unassuming soul out of the crowd and hurling tomatoes at them when they didn't see it coming. Even though people were doing it to me I still got such a chuckle out of it. One option instead of throwing the tomatoes is to squash the tomatoes on peoples heads. Of course for me this included Steph's and was so fun. Watching the tomatoes juice run down was totally worth it. She of course returned the favor smashing one in my ear which I'm still finding pieces of even back in London.

I do have to say however that it was a seriously long hour. Getting hit by shirts, tomatoes, flip-flops, cups (people throw anything they can get there hands on) does get tiresome not to mention the sheer energy it takes to manage the surge and hold your place in the crowd. When the canon fired again we took a big sigh of relief and started heading off the main street.

Walking down the street we were ankle deep in tomato puree. Splashing and swimming in it was almost more fun than throwing the tomatoes. To have the opportunity to do a two-footed splash down into the deep tomato puree is such a boyish pleasure. You know like splashing in a puddle when you were a little kid, soaking your mom in the super market parking lot and the trouble that followed. (Sorry Mom!). The look on Steph's face the first time I covered her in tomato puree was priceless. She just shook her head as globs of tomato slid slowly down her legs and then followed suit. The entire event was over the top!

Finally we made our way to the bus and stripped off our tomato ruined clothes. By this time the heat of the day was starting to awaken the rotten tomato smell, yuk! Even after changing clothes and leaving them on the side of the road, we still stunk. Tomato fragments were everywhere. Steph's poor hair. Last night soaked with wine, today embedded with tomato. What fun!

We headed back to Valencia where the clean up began. Oh, and a nap too! Steph kindly let me shower first knowing the feat in front of her. After spending 30 minutes on her hair alone (dry combing the big tomato bits out in the sink, then 2 shampoos, then wet combing, then conditioner, then combing, then conditioner again), she was finally able to call herself tomato-free and joined me for some much needed sleep!

Here's all the photos that turned out from our disposable cameras.
Posted by Unknown at 12:30 PM