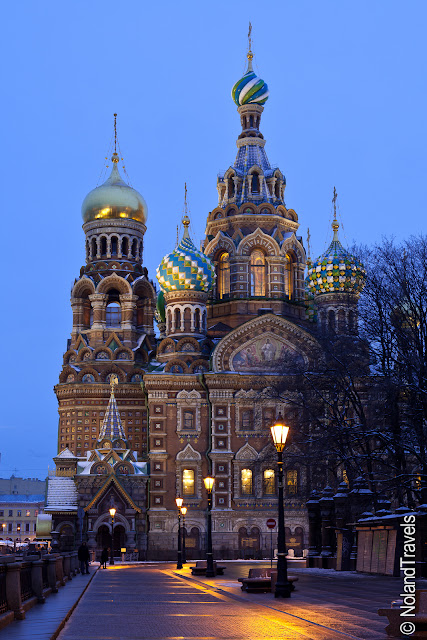 There isn't anything that says Russia to me more than seeing some if its out of this world architecture, well, other than Vodka that is.  From grand to unique to beautiful there are some buildings that just scream I'm in the former Soviet Union.

Let me introduce you to this church which seems to have lots of different names.  Its commonly referred to as either The Church of the Savior on Spilled Blood or The Cathedral of the Resurrection of Christ, take your pick.  Which ever you choose, the building is amazing, topped with its mosaic and gold "onion" domes.

Built on the site where Tsar Alexander II was assassinated (spilled blood), its tucked away on a canal a few minute walk from the main Nevsky Prospect boulevard.  Walking towards it gives you ample time to awe at its grand stature and distinctive style.  However, it  shouldn't be confused with other similarly colorful churches, namely St. Basil's in Moscow which we will see later in the trip.

Inside was fairly remarkable too.  It was full of intricate floor-to-ceiling decoration and stunning gold mosaics.  On entry you were handed blue plastic shoe covers to protect the colored marble floor.  It was actually mostly covered by carpets but the exposed central portion was enough to understand what lay beneath.   The mosaics covered every square inch of the walls and ceiling and we spent a good deal of time with our necks bent upwards - admiring the gleaming mosaic tiles.  By the time we headed for the exit we had been blinded by the golden glow from the decor. 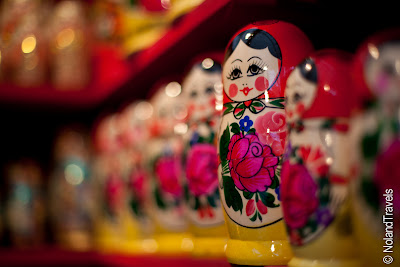 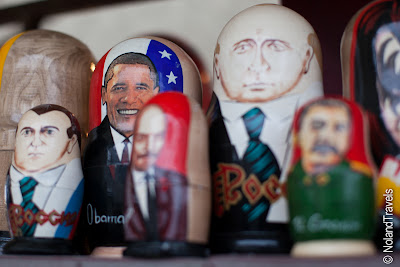 Outside was another Russian sight to be had, Matrushkas!  You know the ones, the little dolls that open up to seemingly infinite more and more wooden dolls.  Asking around we were surprised to find out that one of the best places to snag one of the coveted dolls was in the souvenir stalls behind the church.

I fondly remember my grandparents having a Matrushka from their travels to Russia and have always thought they were quite cool.  So, I roamed the stalls, while it started to snow, looking for the colors and pattern that suited me best.  I found it quite difficult as they were all so pretty and unique!  Fortunately, Josh was entertained looking at furry Russian hats.  I settled on a nice blue and purple one.  With a little haggling, it was mine!

There were numerous stalls which were good fun to walk though seeing all of the Russian goods to be had: hats, knives, old military pins, CCCP coins and lots and lots of Matrushka dolls in endless varieties.  Josh tried on a couple traditional Russian hats but after we both laughed at his reflection in the mirror, we knew it just wasn't meant to be - shame!

Along with the traditional Matrushkas they have lots of other designs.  From presidents to rock stars to other celebs, you were spoiled for choice.  We had a quick laugh at the world leaders all lined up together, next to the a big KISS doll.

So far, Russia was making quite an impression.  Hope you enjoy the photos below from inside the overwhelming Church of the Spilled Blood.  We sure enjoyed it so hopefully it comes across. 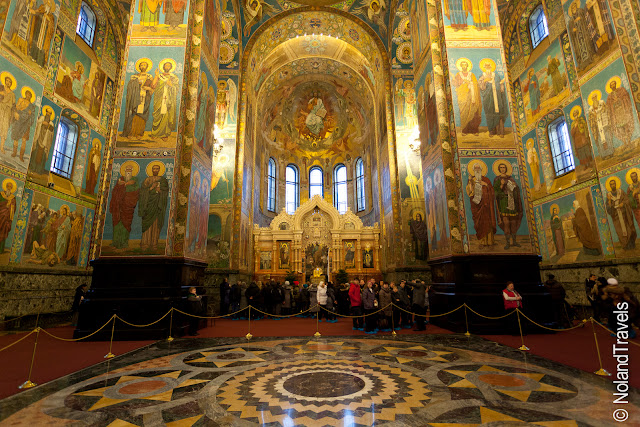 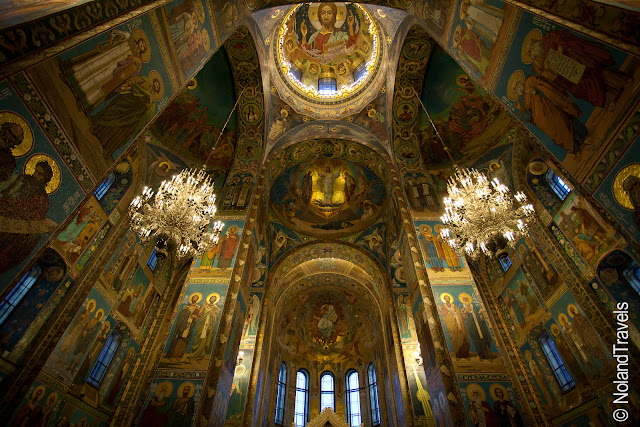 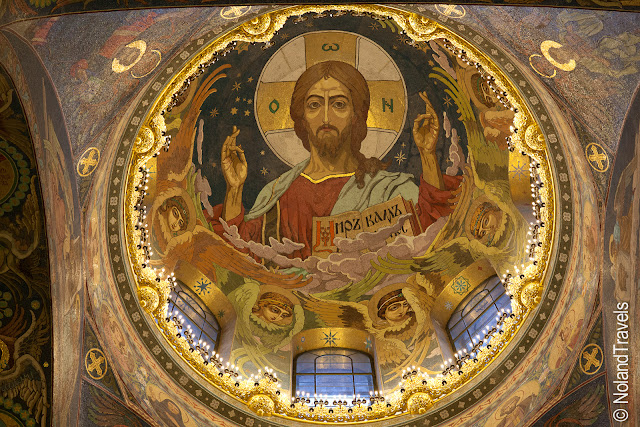