"Fishing without vodka is impossible" - Konstantine 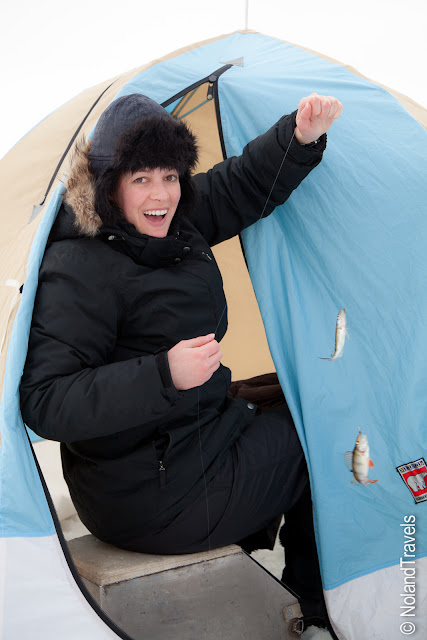 Quote of the day, for sure! Konstantine and his words of wisdom are such a legend.

Well, I guess we need a story to put that quote in perspective, so here it is.

To be blunt, Yekaterinburg was cold, which made the idea of another day city touring a little unbearable.  Ice cycles forming on your beard are a novelty at first but full days out in that weather are tough.  On the ride home from dog sledding we were talking to Konstantine about all sorts of things, his take on local politics, the Cold War and all things Russian - even a little about Kentucky.  Well, ice fishing struck a cord with him and he said if we wanted, he knew a local expert that could take us ice fishing tomorrow. He said he'd go with us which, come to find out, would also get him out of some shopping with his wife.  Sounds perfect, what time tomorrow?

Bright and early, before sunrise, he picked us up and introduced us to his local expert - his FATHER! 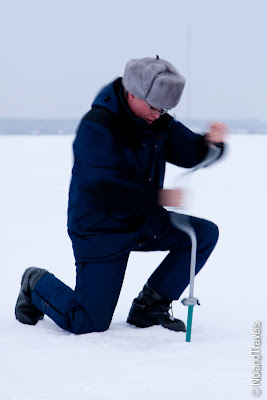 First things first, bait! Ice fishing is an extremely popular hobby at this time of year in Russia. There are bait stores all across town but the favorite was a specific shop which is always the first stop for our local expert.  It was a little corner shop full of fishing equipment where we picked up two small canisters of tiny shrimps and larvae.

Our fishing hole would be the frozen Lake Sharkash, just outside Yekaterinburg.  Luckily the weather was "warmer" than normal, at a blistering 19F (-7C) with light wind!  Even still we had to borrow some heavy duty clothes from Konstantine to be able to sit on the ice all day.  I donned a huge coat lined with lambs wool and we both grabbed some serious mittens with fur inside to keep our hands nice and toasty.


Walking onto the ice with our new gear, we couldn't help but wonder how cold it would be.  Plus the idea of walking on a frozen lake is just not natural for us.  Stepping off the grassy lake edge on to the snow that you knew became the lake was a little nerve racking at first.  We even stepped over some fairly deep cracks as we made our way towards the middle of the lake.  We made a bee line for a hot spot that one of their friends suggested, in line with a certain little house and a black pole on the shore.  Konstantine pulled out the big metal hand-crank drill and quickly drilled a 6-7 inch wide hole in the ice.  The ice was about 3 feet thick before you broke through to the water.  We needed two holes so he handed me the drill and I successfully cut a second hole in the ice. 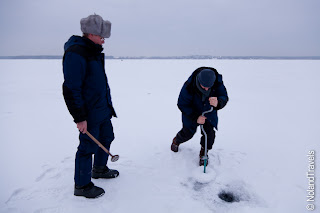 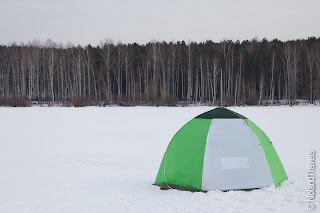 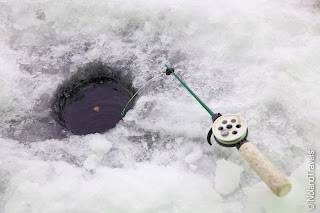 So how do you stay warm on the ice besides heavy duty clothes in this day and age?  Pop-up tents!  They set up as easily as an umbrella.  Before we knew it, we were settled into a tent ready to fish.  The difference was incredible, some wind protection and shared body heat in a small space made all the difference to help stay warm.


Now for the poles.  From my fishing days with my grandparents on Kentucky Lake, I had a certain sized fishing rod expectation in my mind.  But that was not the case today; Konstantine dug out two of the smallest poles imaginable from his bag.  They were no more than 12 inches long.  At first I almost didn't believe he was serious, but he fixed the sinker in place, attached a small cork floater, baited the 2 hooks and dropped it through the ice into the water.
"The cork is the key", he said laying the rod and reel on the ice next to the hole.  "All you have to do is wait for the cork to move, grab the pole and give a quick pull up".  Ok this is new, but hey, when in Russia, do as the Russians.  You just need to keep in mind that we aren't after big fish.  Just small tasty ones.

One ice fishing tip - breathe a breath of warm air into the bait canisters before sealing them up.  This helps keeps them from freezing which increases your chances of landing fish.

As we finished setting up, Konstantine called his Dad over (who had set up his own small tent).  He leaned in, approving our setup before promptly setting out some snacks for us.  He grabbed his knife and cut up some hard boiled eggs, placing half an egg on a cracker then topping it off with a big slice of red onion and a slice of seasoned pork fat. Looking at it strangely we knew we couldn't say no and honestly we were very confused until he added the final ingredient - vodka!  Konstantine explained that a vodka toast was customary to start fishing.  His dad set up little cups and poured each of us a shot (Konstantine passed because he was driving).  We downed the shot and chased it with the pork fat and egg cracker.  The chaser was tough to stomach but strangely fit the experience.   As soon as we downed the drink Konstantine dove for one of the fishing poles, yanking it up and catching a fish.  I kid you not, magic!  Then rather matter of factly he said, "fishing without vodka is impossible", as we all burst out laughing!  We quickly had another shot and cheers'd to good fishing and new friends.

Then as fishing goes, we waited, we watched, we bounced the fishing line, had some nibbles, etc.  Steph and I both caught a couple of fish each before lunch.  His dad was having a little more luck with his two holes so after lunch we swapped tents.  Literally as soon as we sat down, Steph's line bobbed and she gave it a yank but the line seemed empty.  Then seconds later it bobbed again and she yanked again, feeling something for sure. We pulled up the line just to check the bait and were surprised at what we found…a fish eye!  Yikes - that must have been what she felt when she pulled the line! 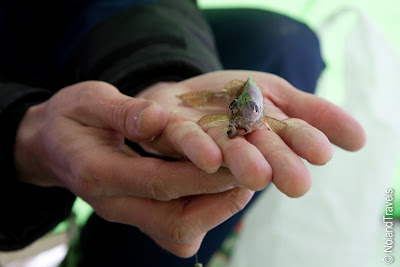 Then my line bobbed and I instantly pulled up another fish.  With fishing in order, Konstantine left to go talk to his dad.  It didn't take long before Steph and I simultaneously pulled up yet another fish each!  I un-hooked Steph's fish and with the bait mostly still on the double hook line, she put it straight back in the water, and before I could finish un-hooking my fish Steph pulled up another!  The local expert had indeed found a better spot.


With the cold creeping in and having caught enough fish for them to make fish soup we were about to call it a day.  Steph's line was baited one last time and Konstantine said she could try to catch the last fish of the day.  We'll you know Steph, set her a challenge and its game on!

I went to help pack up the other tent when I heard a big yell.  "I got another"!  She began to shriek with delight and as Konstantine's Dad unzipped the tent, there was Steph with a huge grin on her face, holding up her line with TWO fish - one on each bait hook!  We all had a good laugh and I got a picture of Steph's double catch!  Perfect way to end a Russian ice fishing day!  (And today was even Friday the 13th!)

Even with all of the extra clothes the cold was really sinking in by the end.  Feet especially.  We capped off the great day by warming back up in our hotel room.

That night "late checkout" would take on a whole new meaning.  We would be checking out around midnight to catch the long leg of our trans-Mongolian journey.  With some time to kill and not wanting to go to sleep, we needed something to do.  Very similar to the famous ice festival held each year in Harbin, China, Yekaterinburg does their own version.  Each year an exhibit is setup so we wondered down to the large town square which was filled with ice towers, bridges, slides, amazing sculptures and even an ice-bowl for the young kids to slide around in.  To top it off most of it was lit up from within with lights and the entire scene sparkled.  Being a little too cold to take photos we just soaked up the scene.

The only thing left to do was a quick grocery shopping trip to stock up for the train.  Pot noodles, snacks and Vodka in hand we checked out of the hotel ready for the longest portion of the train journey.  A staggering 4 nights and just over 3 complete days.

Finally, here is a picture of the local expert who helped us have a entertaining ice fishing experience. 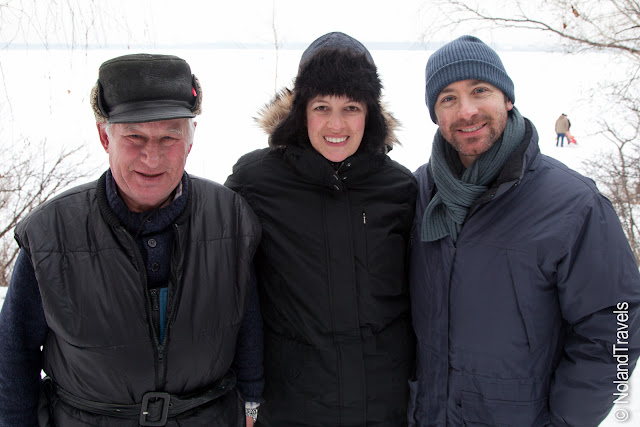