Yekaterinburg - the capital "just in case" 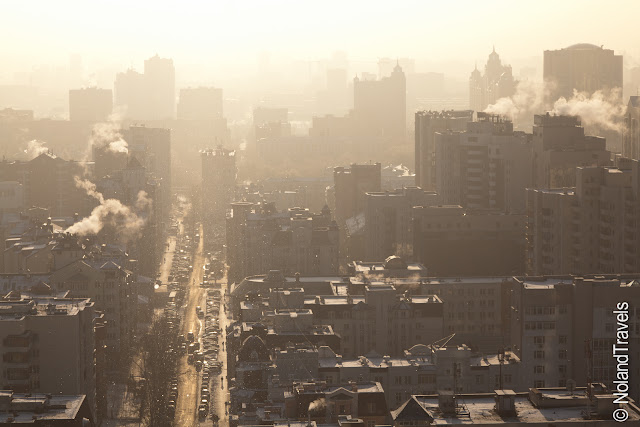 Departure from Moscow came too quickly but we were looking forward to some outdoor activities in Yekaterinburg and a longer train journey experience as a test run before the trip across Siberia.

The loud speaker buzzed with the equivalent in Russian for "All aboard" as we stood in the train station, our bags in a pile on the ground in front of us.  Our driver roughly translated, er, well motioned to his watch, then ushered us to the train and our designated carriage.  Climbing on board we met our conductor and after a quick passport check settled into our cabin.  For some reason there is always a little excitement boarding trains, especially ones you know you can settle into and just relax.  Books (guide books and Kindles), iPods, a change of clothes, our silk sleep sacks and hand wipes out of our bags, we tucked them in the netting above the seats while waiting to see who might be joining us in the cabin for the 36 hour trip to Yekaterinburg.  Exploring the car, it was quickly evident that this train was much nicer than the previous one to Moscow.  The toilet is an easy gauge.  It was sparking clean with the normal supplies that aren't always a given. 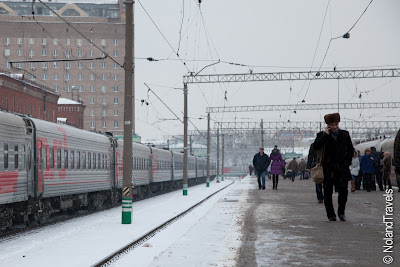 As the clocked ticked down to departure, we were surprised to find only one other passenger had boarded our car.  Yeah, I guess in the middle of winter only a few foreign travelers are willing to brave the Siberian winter and now that the Russian holiday travel period is over, its just not that busy.  Oh well - our gain!  Some much needed quiet time will do just fine.

After a quick bite to eat in the dining car it wasn't long before we were both heavy eyed and making up our beds.  Josh chose the top bunk so I happily settled in to the bottom bunk. We quickly drifted off to sleep helped by the cozy warm train and the soothing soft klickity klak, klickity klak and rocking motion of the train.

The next morning we awoke to sunlight pushing through the curtain gaps and marvelled at the white expanse outside our windows.  Every once in a while you'd see a small town with smoke billowing from the colorful wood structure and tin roof homes or kids sledding at the edge of town, waving at the train going past.  Thanks to the endless hot water supplied by the samovar, we enjoyed instant porridge and instant coffee while admiring our morning view.

Ok, so now we're on a train for a full day - what do we do?  Well, in short, not much.  We both spent some time staring out the window, snapping a couple photos and reading.  After the fast pace of the previous days, we both needed to relax and this perfectly fit the bill.

Before we knew it the conductor came knocking on our door, "20 minutes to Yekateringburg".  Is the day already over?  Yep it was sunset as we pulled into the station.  We grabbed our bags and stepped off the train ready to embrace the cold. 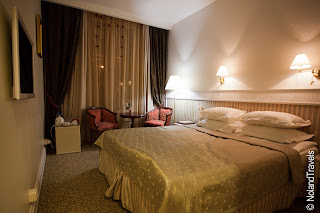 "Hello, Josh and Stephanie", a man with the iconic Russian fur hat said meeting us at the carriage door.  "My name is Konstantine", as we shook hands.  He would be our local guide for our stay in his home city.  We wondered how he knew it was us stepping off but I guess with only 3 people in the train car it was fairly obvious.  Driving away from the station Konstantine was instantly likable with very good English and an excitement to be showing us around.

He took us to our hotel and helped us get checked in before outlining tomorrow's itinerary.  This was easily the nicest hotel we'd been in so far- with lovely decor and all the amenities you might expect plus some other bonuses like decent priced house wine and free movies.  The staff even played up the scene wearing some traditional clothing. 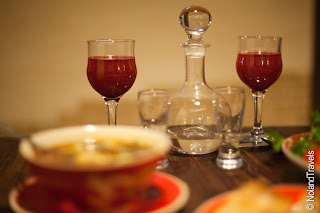 Konstantine had given us a few dinner recommendations which we were keen to try out.  Tonight, we chose the closest and ventured next door to a mall restaurant that served good local food.  After sitting down we were handed Russian menus.  The wait staff just smiled at us, not knowing a word of English.  Ok, no English menus, no pictures, we can deal with this - action plan B!   Josh ran back to the hotel for our guide books (thank goodness it was practically next door!) and we then spent 20 minutes comparing Cyrillic words in our books to those in the menu.  We settled on something "pork", something "chicken" and some type of potatoes.  Who knew how it would all be prepared but at least we knew what meat we were getting!  Turned out Josh got pork in a creamy flavorful sauce in a skillet and I had a nice roasted quarter chicken.  All topped off by a little Vodka and some sort of delicious cranberry juice drink as you can see in the photo.  Whew! 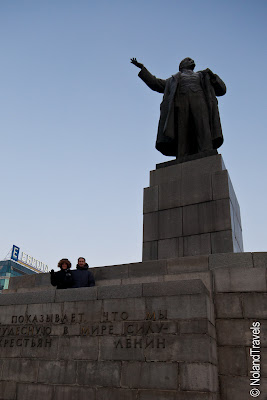 The next morning, Konstantine met us early for our "walking city tour" and we were well pleased to find out it was actually going to be a driving tour given it was a chilly 6F (-14C) outside.  Having done no preparation or research on Yekaterinburg, Konstantine provided a wealth of information to soak up.  To introduce us to the city, he explained that St Petersburg is the old capital, Moscow is the new capital and Yekaterinburg is the capital "just in case".  It was a major center for production of military equipment such as tanks and missiles and was built up quite nicely during WWII, just in case…

You can see us with the huge statue of Lenin in the center of town. 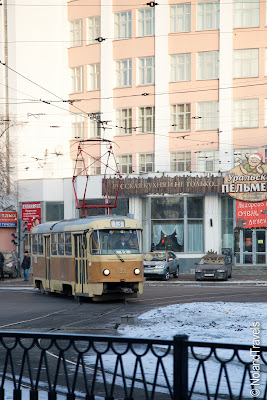 At one point driving through town we saw one of those digital signs showing time, temperature, etc.  Josh commented on the temperature (something around -15C) and Konstantine was quick to point out what the other figures on the sign represented:  time, temperature, humidity and radiation levels.  What?  Yep - it's common apparently for some cities to have radiation levels posted around town.  It was at 11.  He said that was normal but it had been up to 20 before (but 20 is still safe, apparently…I asked!).  Good to know!   But still, radiation readings!?

As previously mentioned, the city is well built up - clearly it was an important city in history that justified advanced dams, significant architecture and infrastructure.  It was actually closed to visitors during the Cold War and only recently opened up due to its military past.  Some of you will remember the name Gary Powers, who was an American pilot shot down near Yekaterinburg in the 1960's.  Funny enough he was born in Kentucky.  So with such a connection, we had to stop in the Military Museum where we could see a small fragment of his plane and pictures of some of his gear - a fascinating emergency pack of rubbles, cigarettes and jewelry for the ladies "just in case", I guess…!

Back a bit earlier in history, 1918 in fact, the city was infamous for being where the last Russian Tsar, Nicholas Romanov, and his family were brutally murdered during the Revolution.  The entire royal family was more recently canonized and a cathedral was built here in their honor in 2000 - 2003 on the site of their murder.  It clearly was a new-ish cathedral but rather impressive since it was built in modern times and the artwork inside was quite good.

Konstantine then took us to one of the tallest buildings in town so we could get a bird's eye view of this fascinating, industrial town.  The view clearly showed the ultra modern buildings and beautiful historic buildings in the foreground, with it quickly fading to industrial sites and smoke stacks in the distance.

We had a great lunch at a restaurant called USSR which felt as if you stepped back in time with kitsch decor and a machine gun mounted on the bar.  Afterwards, we opted for the Mineralogical Museum - where you could see samples of the many minerals, stones and crystals that thrived in the Ural Mountains.  We were a little worried when we were at the address and couldn't find it; nor could a nearby building security guard tell us where it was.  When we did finally find it, we walked up stairs to find the place dark and a couple workmen with wood saws.  A lady at the door indicated it was open and after our obvious hesitation, she turned on some lights and welcomed us in.  It was pretty much a large room with a lot of glass cases full of minerals and stones, but after they handed us a handheld light (to really shine the light on some of the sparkly, reflective or translucent surfaces) we had an interesting wander around.  Fortunately, it was a cheap ticket.  But it did go to show the richness of the Urals - you could understand why this city, in this geological location, was quite important to Russia. 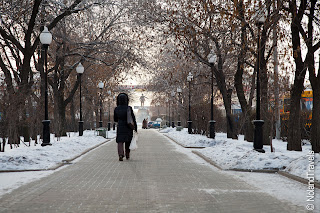 For having not prepared for visiting Yekaterinburg, we had a fascinating day full of interesting stories and sights.  We rounded out the day by taking it easy back in the room - ordering a pizza and partaking in the free movies and a cheap bottle of wine (and as you might expect, the wine was one of those too good to be true things...it was indeed cheap)!  The leisurely night was important though because tomorrow we'd be waking up early to go dog sledding!

A few more photos
Posted by Unknown at 12:18 AM