Finally a little dose of summer 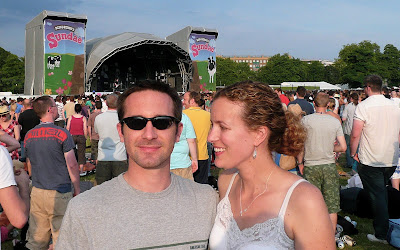 As some of you know I've been moaning about not having much summer weather (hot weather). Well I think summer has finally started, even if its just short lived because the last few days have been fairly warm - in the mid-eighties. This is a heat wave in British terms. They have even been calling it an Indian Summer because its warm and dry. Not sure about that one but hey we'll go with it...

Luckily there was a festival, Sundae on the Common '08, sponsored by Ben & Jerry's (yep the famous one from Vermont) on Clapham Common which is only a few minute walk from the flat. A bit of rock music and all the free ice cream Steph could handle. From Chunky Monkey to Bohemian Raspberry to Cookie Dough we tried our best to sample them all but you can only eat so much ice cream.

We went with our New Zealand friend and his British girlfriend who are moving back to New Zealand in September. We had a great day on the common enjoying the music, soaking up the sun, eating the ice cream and people watching. One of the best parts was only being 10mins from home instead of the usual long commute home after a festival.

In other news its fairly slow from here until we head to Spain at the end of August. Steph better watch out because I see loads of flying tomatoes in our future.
Posted by Unknown at 4:44 PM