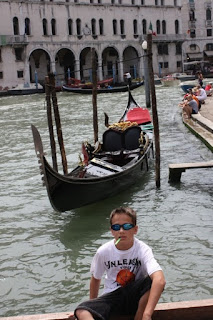 After arriving in Venice I must say I miss the summer heat. Being in London now for our second summer it just doesn't get and stay warm like it does in KY. It's nice to get a dose of it even if just for a few days. We had a fairly easy trip into the city but had a bit of trouble finding our hotel. Even the second time around all the streets look the same and are just not labeled the same on our maps...gees. We had a mid-night dinner then wondered around St. Marks Square giving Garland his first taste of Gelato. Anybody think he liked it? Walking around the square and around the canals was so peaceful and so Venice. Amazing!

The next morning we toured a bit more of Venice taking Garland to see the Rialto bridge, the markets, and all the shops. One of the big hit's was the fish market and all of the different types of fish.

Here's what Garland wrote about his first of two parts in Venice.

"Well, we started to pack for Venice again and boy we packed more than we realized, which we learned after we got lost after and had to walk for 2 hours. We had a normal flight about two hours and we flew right on the side of Venice and it was amazing...but when we got there it was nice and warm. We took a bus to the outside of Venice and then took a water taxi into the city,which took about 30-45 minutes. Then we started to get lost and boy it sucked. We would think we were going the right way but we would get so far only to have to turn right around. The only reason we got lost was because the narrow streets are either horribly marked or not marked at all. But eventually we got to our hotel. Then we went out to eat and after Steph decided to show me gelato! I loved it! it's better than ice cream. The guy who we got them from gave us a discount so that all 3 of us could get one because he couldn't give change for our big money. We all ate our gelato out in ST. Mark's Square and Steph named the water on in the square pigey water because all of the pigeons there poo and even die in that nasty water lol. Then we all went back to our room and went to sleep. The next morning we all got up and went out to explore some more of Venice it was long but fun. At the end of the day we hopped on another water taxi and then we went down and got on our cruise!"