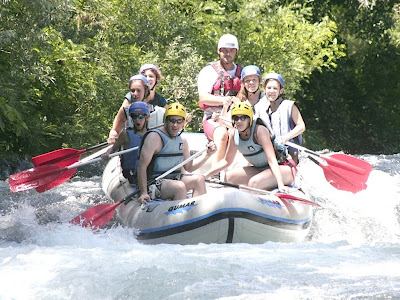 Our last port of call was Split, Croatia. Now, if you are anything like any of us - you probably know very little about Croatia. In talking to a few others it was supposed to be a beautiful country with beaches, mountains, rivers and as always historic towns. Since its fairly new to the tourist scene its still very unspoiled and still very Croatian. After going to a few other historic cities we decided this was the perfect place to get a little outdoor adventure so we scheduled a rafting trip down the Cetina River.

We made our way outside of Split to a quant little town called Omis, where we met up with our rafting guide, Marco. Before we set off we had a quick safety demo and a bit of training on how to paddle as a team. What is bomba you ask? Bomba is a Croatian word; we used as a command in more dangerous rapids. When Marco yelled "Bomba" we had to all get down in the center of the boat putting our paddles on the side of the boat so he could navigate the rapids and interesting situations safely. Bomba! (After a bit of research it appears to mean grenade or bomb so I'm not sure if I'm spelling it right, but you get the idea).

The Cetina (set-ina) river isn't all class 5 or 6 rapids but does have a few bomba rapids. We cruised along the river navigating the rapids, paddling on the calm stretches and stopping occasionally to swim, explore caves and jump off the rocks! Yep, I said jump off the rocks!

About mid way through the trip we tied up on shore where Marco said he had to navigate the next set of rapids without us. We could either take a short walk on the outside of the river or to go through a small cave. Easy right, well if you choose the cave there's no turning back and you must swim through about 10 meters of 5 degree celsius water (40 fahrenheit) and climb up and down numerous rocks and boulders to make your way along the side of the river. Garland wasn't super happy about the near freezing water part but after a little encouragement we said we'd take the cave. It was a GOOD choice.

The entrance to the cave was short climb away and hidden by a ice cold waterfall. We walked through the waterfall and climbed down into the cave where there was a small pool of water. This was the cold swim and there was no turning back. I could tell Garland was nervous and he asked Steph to go first. When she got about half way across she turned and gave us the cue to follow. At this point Garland had nervously climbed up a rock above the water so I went in first. You must know I'm carrying a waterproof jug with our SLR camera and the camcorder so I needed to keep it out of the water as best I could. As I went in Garland and quickly followed. He jumped off the rock straight on my back. As the ice cold water stung my skin he landed on me and dunked me under. Trying to keep the camera jug arm out of the water I was swimming with one arm and a frantic Garland on my back who was doing his best to hang on and stay out of the chilly water. At one point I lost a flip flop and dunked the water proof jug but we made it across all in one piece, albeit cold but adrenaline filled. And we even had dry cameras in the end ;) It was so much fun!

The remainder of the cave exploration was just as exciting keeping the adrenaline going. We climbed from rock to rock, over small gaps and around some crazy ledges all in the very little light. It was a bit scary at times but was an absolute blast.

Exiting the cave we found ourselves at one of the serious rapids that Olympic rafters use to train on. We had an amazing view of Marco as he passed the challenging rapid.

Getting back in the boat we navigated quite a few more rapids until we reached a place called Devil's Pass where we stopped to take a break. This was the deepest part of the river which had a great rock cliff to climb up and jump off. And we did! Too much fun. We have video of Garland and I jumping off. (Steph, having gone cliff jumping in Hawaii was content being the camera woman for this one)

The rafting trip ended with some lazy paddling to the end of the line. We were exhausted! It was time to get back to Split, grab some lunch and find a beach to briefly relax at before boarding the ship for our last night at sea.