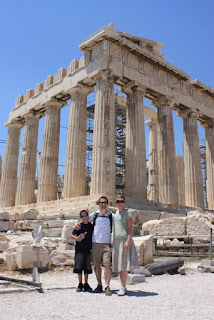 "Hot" was the word of the day in Athens - it reached around 95-98 degrees Fahrenheit. We hopped off the boat as soon as it docked and made our way from the port to Athens via the metro. We were already sweating from every pore by the time we got to the train (the cruise ship gave us directions to the train however they failed to mention that it was at least a twenty minute walk. We might have opted for a taxi had we known). Anyway, once in city centre, we came out of the train station and there it was - ancient ruins perched upon a hilltop above us - amazing! We started the tedious climb up the hill, stopping frequently in the shade to guzzle some water and rest. The sweaty climb paid off when we got to enjoy the temple of Athena, the Parthenon and a couple other sites that I'm afraid I'd have to pull out the book to tell you their names. Regardless - the structures are impressive. It is hard to imagine man made those monstrosities over 2000 years ago, some even in BC. Oh, and I got yelled at by an Acropolis staff person. Josh was going to take my pic in front of the Parthenon and I raised both my arms to the sky being excited by the monstrous building behind me....as I did a lady frantically blew a whistle and motioned for me to put my hands down - huh? Fortunately, there were some other tourists right next to us (who took the great photo above) and they said "she is telling you to put your arms down - its considered disrespectful - you're not the first to be whistled at". Well - you learn something new every day...I am going to have to google that to figure out how I was disrespectful of the gods, I assume.

After taking in all the history on the hilltop, we headed down the hill to the Plaka - the shopping area! haha - no, I did not walk away with much - actually only a 1 euro charm of the Greek eye - for good luck! Garland snagged a cool bronze bull. We stopped for lunch at an outdoor restaurant with water misting fans (purposefully chosen). The food was all great - chicken souvlaka for me, lamb souvlaka for G and chicken and pasta for Josh - all uniquely Greek and tasty! We then made our way through the Plaka towards the Temple of Zues - something Josh was looking forward to. It did not disappoint. Although very few columns remain in comparison to its glory days, the remaining dozen columns are quite impressive.

After admiring the temple of Zeus, we headed swiftly back to the boat boarding at 7:10pm (last call being 7:30pm or the boat leaves you!). All in all, it was a hot, hot, hot day accompanied by some of the oldest and most impressive structures we have ever seen. We decided you could have probably cooked an egg on some of that marble (in case you didn't realize - most, if not all, of the structures are made from solid marble - whoa!). Although lunch was good, the heat curbed our appetites and Garland made up for it at dinner putting down a shrimp cocktail, two (I said two!) main courses of pork loin, finished off my linguine marinara and had two scoops of chocolate ice cream and claimed he still wasn't full.

A bit of tidy up before we go. First of all, internet access isn't what we had hoped. Its tough on the ship and at a port of call its difficult because we are so limited on time. Our apologies but we will do the best we can until we get back to the UK. We are blogging almost every day but can't post it straight away which is why you are getting 3 entries at once. Second, to the Draper family all is still well. We are having a fantastic time and are meeting some fantastic people. As we speak Garland's actually at the arcade with a girl his age that sits at our dinner table from New Jersey. And finally we are at port tomorrow and will have a phone if any urgent has come up or if Kathy wants to quickly check in. We should be ashore between midnight to 1pm EST.

Thats all from here. Off to Mykonos...
Posted by Unknown at 6:32 PM