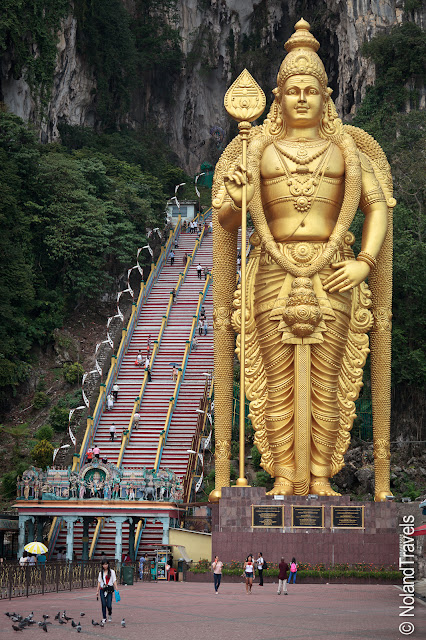 It's departure day in KL which has given us a little motivation to get out and see one of the top sights in town. The sacred Batu Caves.

Sitting on the outskirts of the city, within KLs' public transport reach, sit 3 limestone caves.  They are one of the most sacred places for Malaysian Hindus to visit and once a year the Thaipusam Festival draws upwards of a million people for pilgrimage.

You hop off the train nearly on the doorstep of the caves.  It's only a few minute walk to the entrance, well the stairs, leading to the entrance.  It's a fairly steep and long climb but along the way you do get some entertainment as the resident monkey's greet you.  Cool, right? Well, not exactly.  After years and years of people feeding them, they have evolved into vicious, evil little creatures that have a tendency to harass people and steal food (or anything resembling food).  Sometimes even right out of your hands.  It's actually a trait found in a lot of resident monkeys who inhabit big sites in the region.  Even young kids aren't safe if they are eating food.  We witnessed a monkey steal an ice cream cone from a toddler.  Poor kid (silly parents for not knowing better). As long as you aren't eating there is some good entertainment watching other less-aware people try and deal with or interact with the monkeys.  Think standing next to a monkey trying to get a photo.  Plus there are always a couple people who are literally afraid of the monkeys - sorry, this is entertaining, too! To be fair they are very unpredictable which makes people, including us, jumpy at times. 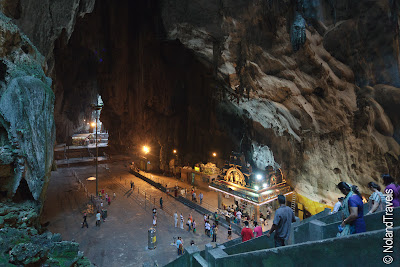 Once you climb up the long flight of stairs you enter the cave where temples have been carved out of the rock.  The main cave is one huge cavern with steps leading to another connected section.  Although spacious overhead, it was very hot and humid inside.  We had just missed the festival and were honestly glad!  The heat was intense and we were there with only about 100 other visitors.  Thinking of cramming in with huge numbers of people for the festival made us cringe. 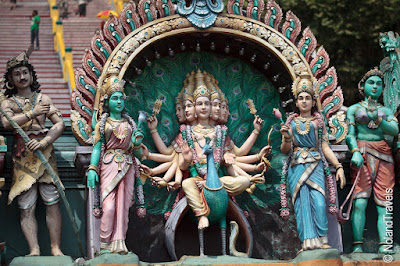 This was the hottest and most humid weather we'd had yet and I was roasting.  Josh was having a good laugh at me.  I wasn't happy at how I was sweating through both the front and back of my shirt.

Looking at me, shaking his head he said,  "I've known you for a long time and I'm baffled that I'm just now finding out that the concept of sweating is new to you".  In response I had to laugh too!

I've never thought of myself as a super high maintenance kind of gal, but I did have to admit that I didn't put myself in these sweaty situations very often in my lifetime!

While in the cave, we caught an interesting ceremony at one of the temples.  We had seen people lugging up metal canisters and bags of fruit which were being offered to the temple by visitors.  Josh was even asked if he'd carry a big metal container full of milk to the top.  At the time, having no idea what it was for, he replied with a cheeky, "I'll carry it for 25 dollars".  The guy looked at him, confused, and started up the steps.

The liquid in the canisters, as we found out, was actually milk, honey and other offerings to be poured over the idol in the temple during the ceremony.  It would then be rinsed with water and then spread with powders (maybe herbs or curry powders).  It would be rinsed again and then doused with milk again.  Periodically, it would get wrapped with a flower garland briefly, then the milk and powders would start all over again.  It went on for probably 20 minutes or more.  It ended up being a significant amount of milk and offerings surrendered to this idol.  Here is a short video to give you an idea of the ceremony we witnessed.

As we started to make our way down the stairs we realized the humidity wasn't in vain - it was about to rain. We hurried down but only got as far as the temple at the bottom before the heavens opened up.  So instead of getting soaked we followed the lead of a few of the others.  We took off our shoes and grabbed a seat on the cool stone floor in the open air temple and watched more ceremonies at the various idols inside.  It was a peaceful respite from the pouring rain and let us admire many families, clearly dressed up for the visit to this important temple complex.  Plus we met some friendly locals who came to ask where we were from.

When the rain started to let up we decided to make a run for it - the finish line being the overground train station a couple hundred yards away.  As we started our dash though, Mother Nature wasn't finished and we ended up soaked by the time we got to the cover of the station.  Well, at least we were refreshed after all that sweating, right?!

And with that, we chilled out, literally, in the air conditioned train back to town.  We had stored our bags for the day at the train station in preparations for the overnight train to the island of Penang, our next destination.  It shares the name of one of our all time favorite curries which we had mysteriously not come across yet in Malaysia.  Maybe the island keeps it as a treasure of its own - we were off to find out!