Discovering the Fruits of the Rainforest 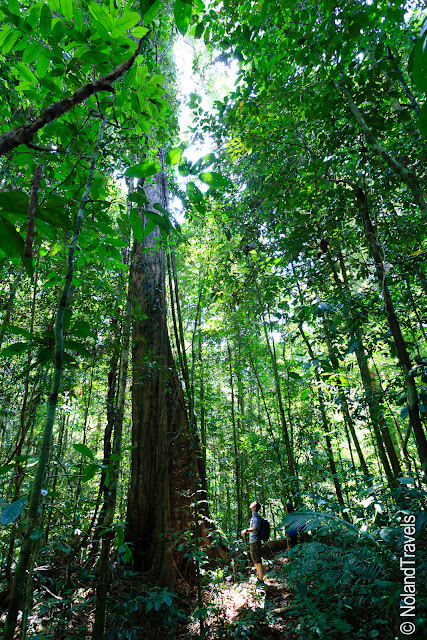 We woke up leisurely and had a filling breakfast to prepare us for the no-doubt strenuous rainforest discovery walk.  Having been in rainforest a couple times already on this trip – we knew this would be a steamy and, at times, grueling, through mud and gunk. 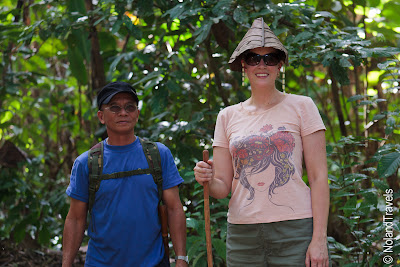 The longboat was waiting to take us away, so we donned the required life vests and prepared ourselves for another thrilling ride down the river.  But this time, we simply crossed to the other side where our guides, Adi’s uncle and cousin, were waiting with machetes on their hips.  What were we in for?  We weren't entirely sure but we set off beginning one of the most fascinating treks we've ever had.

The locals have lived off of these forests for lifetimes and there was an endless supply of utility from forest life.  They showed us various things as we walked and they even climbed trees so that we could sample the many fruits of the forest: 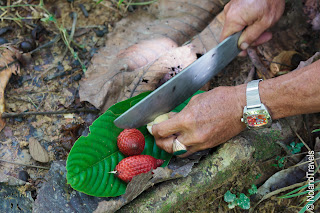 They also showed us dug out areas in the forest where people would hide during WWII.  Along the way, they sometimes took a little extra of something and put it in their rucksack for later.  We were on a rainforest tour but to them, we might as well have been walking through a super market as they picked up what they needed for the week!  It was awesome! 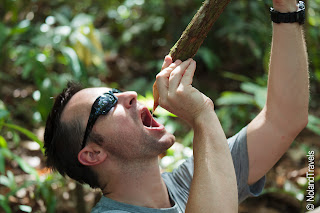 As we progressed through the forest we came across fascinating bamboo gardens with thick bamboo growing in every direction.  Given the size and density of the gardens you could easily understand why some people think bamboo is the sustainable building material of the future.

The ground vegetation then started to thin and the overhead space began to expand.  We had entered the primary rainforest!  Mature trees towered stories above us filtering out much of the sunlight.  As you can imagine trekking was hot and steamy.  Up and down, over fallen trees, crossing small streams, ducking under vines and around huge bamboo trees, we carved our way through the forest.

We finally made it to a river clearing where we could have our packed lunch.   It was a nice break and Adi decided to take a dip, fully clothed as always, in the cool water.  Not wanting to trudge through the forest in heavy soaked clothes, we opted for only dipping our legs in.  It’s funny though, because she was covered head to toe and not sweating a drop while we were in shorts and tee shirts soaked from head to toe. Maybe we should have gone for the full dip – it wouldn’t have mattered much anyway! 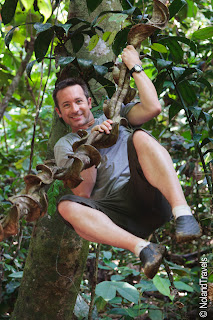 After lunch, we started making our way back when we heard a helicopter overhead. Suddenly, the guides started moving faster, heading straight for the helicopter clearing in the secondary forest.  Before we knew it we were nearly running, following the men chopping through vines and up and incline. The winds were swirling, blowing debris and stirring up the branches.  As the helicopter came into land we made it to edge of their landing pad.

We’re not sure what happened but after we were spotted, they decided against landing and quickly took off.  Maybe they thought we were crazy locals that would get them if they landed; we were waving around our long walking sticks...

We stuck around to see if they’d come back but quickly realized that for as hot as the interior of the forest is, it is decidedly cooler than in the direct sun.  So, we set off again back to our starting point.

After a 6 hour adventure we reached our starting point at the river’s edge.  We were hot, tired and glad to be back.  Standing on the riverbank, looking across the shallow river to our lodge on the other side, we contemplated the boat ride back.  We were already soaking wet and the river was only waist deep at most. It was another moment where we just looked at each other and said let’s go – we threw the camera bag in the boat for safe passage and ran down the rock path and splashed down in the river.  Taking a dip in the clean water was unbelievably enjoyable!

Crossing the river was a piece of cake despite the mild current. You could pick your legs up and drift with the water.  After turning what should have been 5 minutes to crossing in to a half hour of playing in the water, we finally exited on the other side truly refreshed from an amazing rainforest adventure! 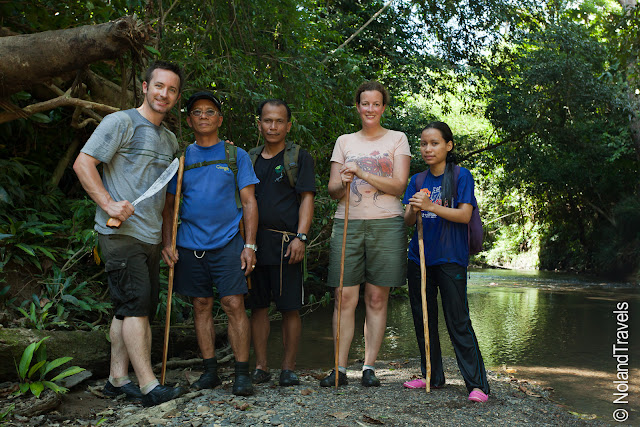