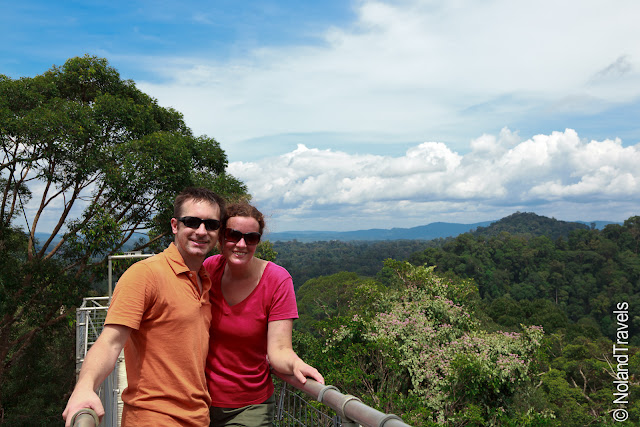 Brunei, although small in size, is packed with natural resources and beauty that make it a wealthy country, indeed.  When considering the options of going to see the well-travelled rainforest of Malaysia in Sarawak or the neighboring very un-travelled forests of Brunei – it was no contest.

Part of the challenge that peaked our interest was the fact that the forests seemed relatively difficult to get to on your own (hence the reason for fewer visitors).  With tourism being in the infancy stages, the book talked of a 45 minute river ferry, hitching a ride and a pricey longboat ride up the river to the actual forest and having only one choice of (expensive) lodging within the national park.  With all that complication you might ask why we opted for Brunei, but the catch was that you could easily arrange a tour and accommodation through a couple travel agents in Brunei.

We found the right agent almost instantly, actually inside the same building as our hotel (Bandar is a small town…).  Given the strong currency and general high costs in the country, the tours were a little out of budget.  Luckily we were talking to the owner and because we were willing to alter our schedule and share a river ferry with two other visitors, we managed a nice discount on an amazing rainforest adventure.  We left with a simple instructions: be at the dock at 7am tomorrow morning. 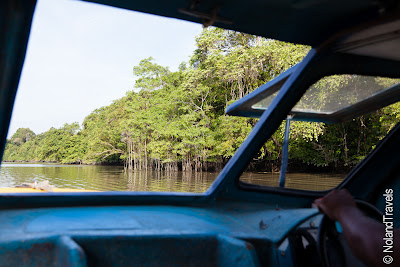 Despite the vague instructions, we found the dock easy enough and the guide found us (yeah, we stick out a bit)!  The ferry was a small speedboat, fully covered, that carried at most a dozen people.  It set off through the backwaters, passing Bandar’s water village.  Think of a housing sub-division with simple wooden houses built on stilts over water, all connected by bridges and walkways.  Further on, the villages stopped and the waterways narrowed into spectacular passageways through gorgeous mangroves.

It was early and we had come prepared, with premixed instant coffee in our canisters.  What a way to start the morning - cruising through the backwaters having coffee and breakfast cakes.  We even spotted a few monkeys playing on the shore.

Upon arrival at the small town, a petite young lady met us as we disembarked – Adilah, our guide for the remainder of our visit.  She worked for the company we booked with who specialized in eco friendly travel ventures.  They build the infrastructure then employ the local villagers to run the operation and most importantly, to be the knowledgeable friendly guides.  Adi fit the description perfectly.  Growing up and still living in the village near the eco lodge, she was only 17 but very keen to study tourism in school and show her side of life in Brunei.  It was mainly her family who ran the camp.  Her mom the cook, her uncle the rainforest guide, ect.  She adored her job which is surprisingly rare but a real treat. 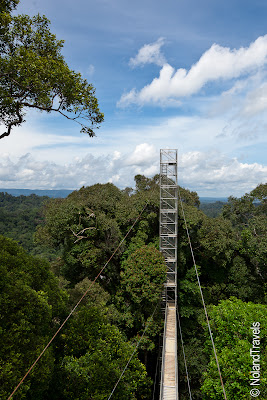 A short drive from the dock and then a five minute walk along a path and we arrived at our camp.  But I'll tell you more about our eco lodge later as today’s activity was a good one!  A canopy walk above the rainforest in the nearby Ulu Temburong National Park. 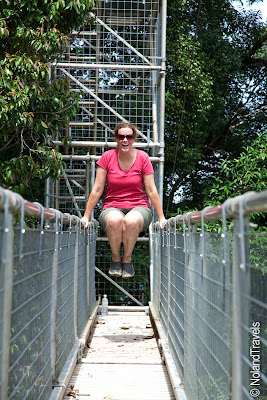 After a quick breakfast, we climbed into a narrow longboat for what they promised as an exciting ride up river.  It didn’t disappoint!  A small engine on the back and the narrow little boat really whipped through the water and some of the rapids we encountered.  They warned us that we might have to get out and carry the boat if the waters were too low, but fortunately, it had rained the day before and with the driver’s careful maneuvering, we made it all the way to the national park entrance.

Cruising on the river it was hard not to notice how pristine everything looked. The water clean without all of the usual trash and environmental damage that come along with much of Southeast Asia.  There are places in the world where I'd hate to fall in, immediately the Ganges in India comes to mind, but here I was actually thinking about falling in on purpose to cool off in the crystal clear water.

We were dropped at a relatively unmarked edge of the forest but up a few stairs and there was a well-trodden path to the top of the hill for the rainforest canopy walk.  Once you were inside the thick rainforest cover, it was immediately hot and sweaty.  No breeze whatsoever.  The path was a stairway made of mud and tree roots at first but then changed over to proper wooden stairs in the steep parts.  After the slow climb to the top, there was a clearing only large enough for the base of the aluminum and steel pole canopy walk structure….which of course had many more stairs to climb to get to the top!


Rising up some 21 floors tall, the walkway runs for 150 feet amongst the canopy of the rainforest.  It was impressive from the ground and looked like it was standing firm even with the wind rustling in the tree tops.  Despite this, Josh looked up at the structure hesitantly.  He’s not a fan of heights.  I was glad he needed to consider the climb because I needed to catch my breath before the 600 or so more stairs to get to the top.

Before Adi would let us climb, there were a few rules.  For safety sake there could only be one person at a time on each flight of stairs and only two people at a time on each walkway or platform.  Ok, Ok, we got it, can we go?

The view from the top was well worth the climb – a picturesque view across the top of a pristine rainforest.   All the way up and at the top especially, Josh held the railing tightly as we admired the view.  The canopy walkway was a series of towers and aluminum walkways between them.  Being less nervous of the height, I had fun swinging on the walkway railings laughing as Josh just shook his head at me. 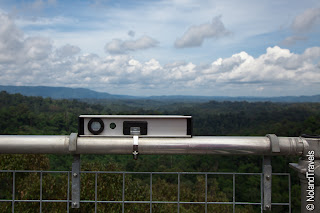 Amazingly, the walkway was perfectly level.  On a few of the towers were strategically placed builders' levels that showed it was standing straight up.  That was good to see for Josh's peace of mind as the aluminum pinged and popped against the breeze. 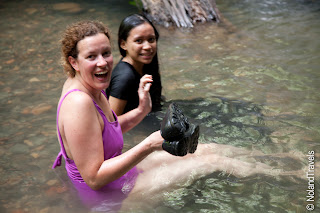 After the excitement of the walkway, the day was not over just yet.  On the boat ride back, we made a pit stop at the local foot spa!  You know those little fish that are becoming a global phenomenon for nibbling the dead skin off your feet?  Well, they are here in the wild and happen to reside at a beautiful small waterfall.  The long sweaty walk to the canopy made us long for a cool swim, so we stripped down to our swimsuits and gingerly put our feet in the shallows.  The fish were on us in an instant!  Funny little nibbles.  Adi just sat down in the water and I followed after.  It’s one thing to have your feet nibbled but it was hysterically giggle worthy to have your entire legs, arms and hands nibbled all over!

We enjoyed the refreshing waterfall and built-in foot spa before reluctantly making our way back to the lodge where lunch and a day of rest in a hammock awaited. 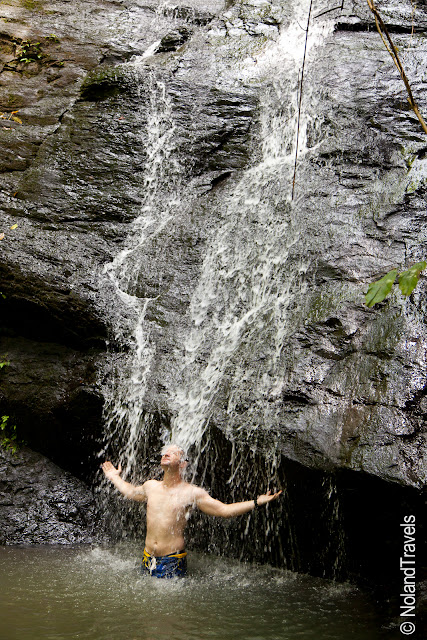