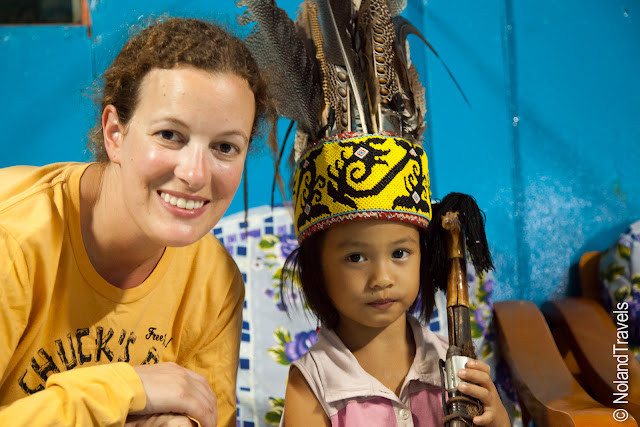 It’s always fun to travel to see sights that are new, exciting or different but often the most rewarding part of travel is talking to people.  I think it’s this aspect of travel that has truly expanded our view of the world.

With that in mind, we were excited about the visit to Adi’s longhouse to meet her family.  On the way, we had a night walk through the forest, spotting several creepy crawlies and some interesting glowing fungus.  Although, the most scary part was the fire ants. 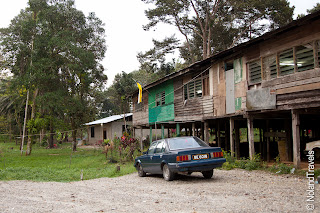 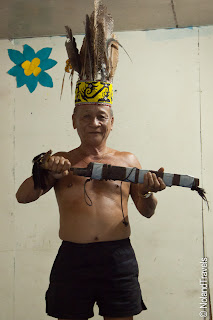 We had seen them during the day and sometimes had to step over them when there was a little river of ants across the foot path.  Night time was no different – except that you couldn’t see them nearly as well!  Thankfully, another guide was in front of Adi and spotted them so twice we casually jumped over an invisible stream of ants in the dark.  It was only when he made the “uh-oh” sound again and instead of seeing his light go across the path you saw it going up the path, including the incline we needed to go up.


This time they weren’t a neat little stream across the path but covered a good portion of it – and with that the guide took a running start and did about three long strides and then a leap up the incline almost like an Olympic long-jumper.  Oh dear.  I hadn’t been enjoying the night walks because of creepy crawlies and the thought of running through a river of fire ants, which I could not see, was not appealing.  I watched Adi quickly run through.  Then I watched Josh slightly hesitate before he made a worthy athletic effort to quickly bound through.  My turn.  Frown on my face.  I told Josh to back up at the top of the hill because if I was running it would be with force.  I took a step back and made like a gazelle to rush through with as little ground contact as possible!


Thank goodness that was the end of our walk and the forest began to clear for the village.   We had arrived at the longhouse in which Adi lived.


She and her family are part of the Iban people of Brunei. They live in traditional longhouses in small villages throughout the countryside.  Although they have some modern conveniences, they still rely on the forests for many of their everyday needs.  In reading up on them ahead of time, we found references to head hunting practices back in the day but we figured we weren't likely to run into this old practice in modern times but still curious.

We were welcomed into the longhouse where Adi introduced us to more of her family.  She explained how they lived in the house, each family having their own section of rooms and sometimes had bigger dinners or functions out in the common area.  Her uncle turned out to be one of the leaders of the village responsible for some of the traditional ceremonies.  He was all smiles and fascinating, showing us a few of his artifacts passed down through generations.  It started with a few photos in a head dress and a quick demonstration of a traditional dance along with a few questions about us and our home. 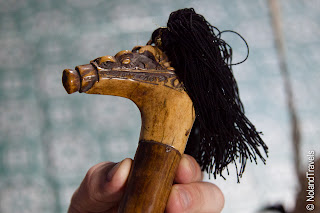 After some discussion he left the room which we figured was end of our visit. However, he came back shortly with a sly grin on his face, handing Josh a machete.  Looking at it I could tell it was old and very special.  With a little translation help from Adi, he asked if we knew what the handle was made from.  It was white and ornately carved attached to an aged machete blade.  A little taken aback Josh didn’t know what to answer.  Adi replied, “human bone”. Come again? Did I hear you right? 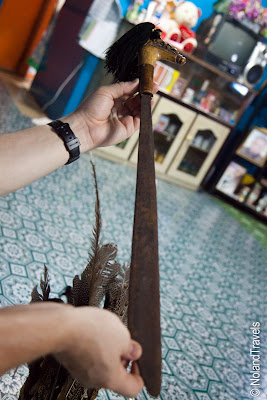 We looked at both of them in disbelief.  If this is true then it could have been used in the head hunting days during the Japanese occupation of Borneo during WWII.  We didn’t get specifics out of them and didn’t ask too intently, but from the looks on their faces it was clear this machete had done what we could only imagine. And that the bone was from a person.  Wow!

I should point out that Adi was very tentative in discussing the machete.  She quickly said it hadn’t been used for a very long time and reiterated this old practice was part of their past.  I can only imagine some of the reactions she gets showing this around.  Again, wow!

Today the Iban people are actually mostly urbanized.  Many of the families have televisions, cars, telephone, ect and a good portion of the younger generation live in bigger cities and not the villages.  They do however, maintain close ties to their heritage and previous way of life.

Before too long, it was time to return to the lodge for dinner and to some unexpected dinner conversations.

Adi had been asking us several things about ourselves and where we’re from over the past days and after she had just welcomed us into her home we wanted to return the favor.  So after dinner, we pulled out the set of photos we had compiled previously to share with our guide in Mongolia. It’s a varied set of pictures plucked from the many we have stored on our hard drive; it has photos of Josh playing soccer, our house in KY, our wedding, our families at the holidays, scenic pictures of Kentucky and more.  We spent the next hour flipping through the photos with Adi intently listening to all of the descriptions and stories.


It’s funny showing these photos to people and the questions they ask.  Often times the questions are around something you take completely and hadn't thought about since you were a kid. As we were showing her a picture of my nephew, Garland, and I near High Bridge, Kentucky in winter (below), we simply said it was winter and the trees lost their leaves.  She looked at us curiously and asked why?  We had to explain that Kentucky had four seasons and that every fall, the leaves fell off as the trees prepared for winter.  The island of Borneo sees only a slight change in temperatures year round so deciduous trees that go dormant for winter don't exist and were new to her. 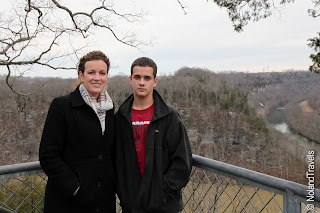 She was so keen and wanted to see more, asking if we had any sunset photos which she loved. We showed her several of our sunset photos including the most recent “Sky on Fire” in Kota Kinabalu.  She loved it and asked if she could have the photo.  We also went through all the photos from the canopy walk and rainforest discovery.  After sharing many of our photos with her we went to bed a little bit sad it was our last night but also grateful for the experience.


Even though we had just finished two incredible days touring the wilds of Brunei, the moment of realization where we explained deciduous trees was probably the most touching.  Those little moments, when you realize that you take something for granted or learn about something completely new to you, are the reason we love traveling so much.
Posted by Steph at 6:56 AM