A Blue Mansion in Georgetown 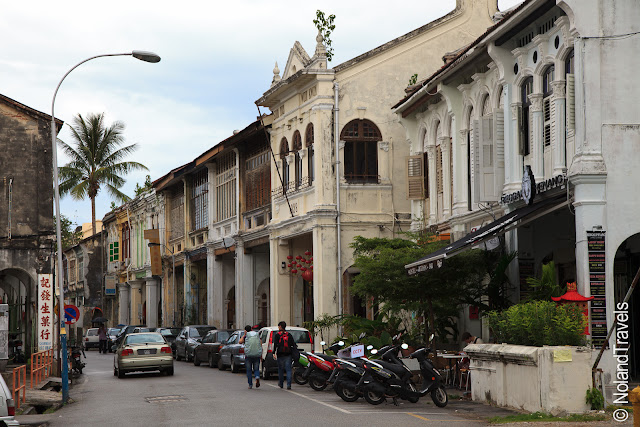 One of the easiest ways to get from Kuala Lumpur to the island of Penang is an overnight train.  Hop on, snooze and wake up a few minutes from the island.  We were enjoying KL and didn't really know how long we wanted to stay, but had been keeping an eye on the train tickets which appeared to have plenty of sleeper availability.  Needless to say we didn't book ahead.

With the days ticking by, we decided it was time to move on and headed to the station to book a ticket for that evening.  SOLD OUT!  What do you mean the sleeping bunks are sold out.  Doh! We had to settle for the reclining chairs which were strangely more expensive and less comfortable! 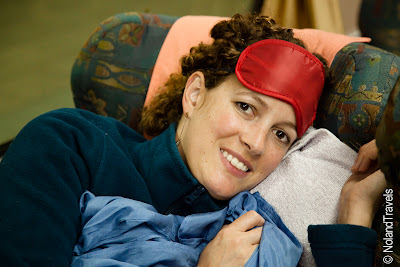 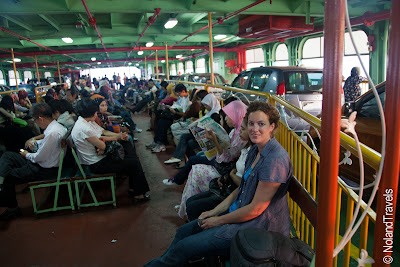 Boarding the train, we figured with so much overnight flight experience this would be manageable.  It wouldn't be the usual sleeper car decent nights sleep (e.g. laying flat) but it should go quick. I’d like to say we woke up the next morning refreshed but it wasn’t the case.  I just can’t sleep well in a chair even with my luxuries of earplugs, eye mask and silk sleep sack!  So we arrived a little groggy at the port where you take a short ferry over to the island of Penang.


The sun was low in the morning sky as we headed to the ferry.  It was busy with all the regulars heading across to start work for the day.  We pushed our way through to a little window, expecting to buy a ticket but instead he just gave us change.  Apparently, the gate to get in just took coins.  Really? Ok, easy enough!  Let’s go!

Everyone was franticly queuing at a big gate watching the ferry pull up and unload.  I don't know what it is about boarding mass transit that makes people go a little crazy. Mix in a few travelers and a load of regular commuters and you get the picture.  There was a lane of motorbikes all revving their engines, two lanes of cars with engines running and some honking as they too waited to board the ferry.  We were standing in a tall wire fenced lane with maybe 100 others in front of a big gate watching and waiting;  slowly the ferry gates opened and everyone dashed through to grab a seat for the 15 minute ride. The pace calmed once everyone was settled, that is, until we were ready to get off on the other side.  Welcome to Georgetown, on the island of Penang. 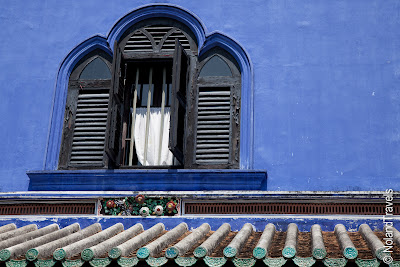 The city of Georgetown has ties dating back to the East India Trading Company and today is a beautiful colonial town recently named a UNESCO World heritage site.  So, in this spirit we booked a hotel running out of an old colonial building to soak up some of the atmosphere.  This turned out to be one of our best hotels to date for charm factor.  Plus it was on Love Lane, I'm serious!  We were already enchanted. 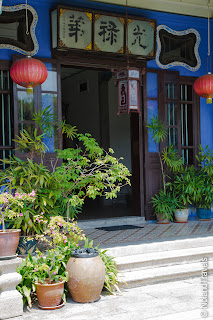 First up on the agenda, The Cheong Fatt Tze Mansion - or better known as The Blue Mansion - which was just around the corner. One of the other travelers in our hotel casually mentioned the daily tour was about to start, so off we went.


We had never seen anything like this house before – it was truly impressive, especially seeing as though when it was built, circa 1880s.  It was a zen home, to be sure, and the tour guide explained the many aspects of the home that would be overlooked if you weren’t in to Feng Shui.

We couldn’t take photos inside but I will try to explain some of the intricacies of the home.  From the main entry hall there was a large wooden screen with doors on either side.  If the screen was closed it signaled to passers-by that they weren’t taking visitors.  But if the middle screen was open (and hence no need for the two side doors) then it meant anyone was welcome to pop in as was customary.

Once inside there was an open courtyard with a sunken stone area in the center.  At first thought, you might expect it to be the swimming pool.  It did collect water because it was open to the sky but the purpose, and ever so slight tilted elevation of the base of it, cleverly collected rainwater then sent it around the house through a series of pipes to cool the rooms.  Early air conditioning!

The wooden shutters were crafted with a simple design using the yin and yang shapes.  The first couple of stairs were rock while the remaining stairs were wooden to signify a solid foundation.


Even the house itself was strategically positioned to be facing East, with a water source in the front and a mountain in the back (although the mountain was really a hill and about 10 kilometers away, this still passed the traditional rules).  Another traditional rule, that the house should be on a hill, was cleverly achieved on the flat land by simply building the back half of the house slightly higher than the front; you had an extra step up to enter any room in the back half.

It was fascinating to learn about all the details that went in to creating this home.  By the end of it, I think we were both thinking “do you think any New York apartments have an open courtyard like that…?”