Think It Will Make It? 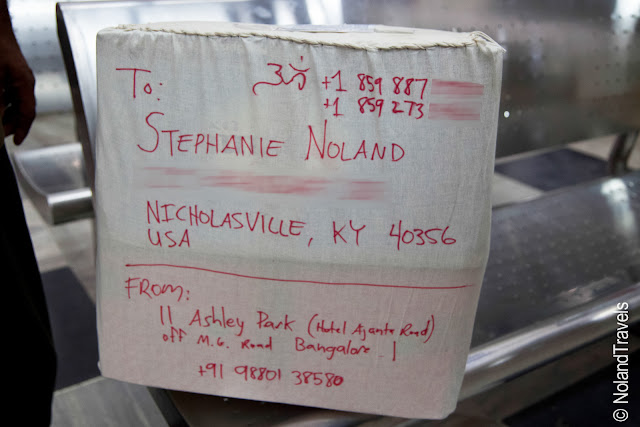 We have decided we are carrying far too much stuff.  Along the way we have picked up a few souvenirs and coupled with some of the extra stuff we have been carrying from the start, we decided to really slim down for the homestretch of our trip - just one backpack and the camera bag.

We packed up everything we wanted to get rid of in one of our backpacks and headed to find an auto rickshaw to grab a ride to the post office.  At the post office, we approached the counter inquiring about sending an international package.  The man asked what package so I pointed to the backpack on my back.  He shook his head and then directed me to come behind the counter to talk to the "assistant station chief".  He spoke good english but was a busy man, signing and handing off various papers.  Showing him the bag we wanted to ship he quickly shook his head and said we needed a box first.

They don't sell boxes, doh! The China post office we used in January stocked plenty of boxes so we didn't even think to show up with a box.  He said any shop would sell boxes.  Where are one of these "any" shops we tried to ask?  He was clearly getting frustrated that we were asking so many questions.  We happened to spy a couple random boxes in the corner, "Can we have those?"  Sure.  Excellent!  He then pointed to an area where a lady was sitting behind a sewing machine.  "She will pack it", he motioned.  With that he ushered us away and we headed to the lady. 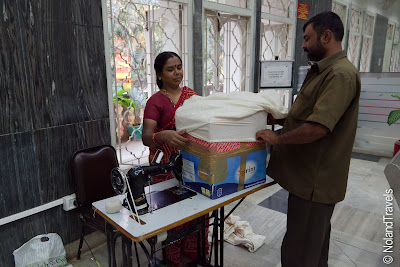 At her desk, she looked at the full backpack and our two empty boxes.  "No", she shook her head and said, "no cloth".  Enough with the shaking heads already, we need some okays.  We just want to pack the box.  "No cloth".  Thank goodness Steph ran across another traveller's blog who chronicled the adventure of sending her own package home from India and found out that they sew up each box in linen.  So, this led to more questions about how we could get some cloth but unfortunately she didn't speak much English.  She was able to convey that the post office closes at 5:30 but eventually tired of our questions and got up to go do some other work.  Hmm, what do we do?

Looking at each other we were both thinking the same thing.  It was 5 o'clock and where were we going to get some cloth.  Its India and things just don't move that fast. Looking at Steph, I said no way.  Seeing that our English speaking assistant station chief was running around like crazy and refusing to give up, Steph said, "Go ask the driver and see what he can do".  One good thing about the auto rickshaw rides is that the drivers will often wait while you run errands and ours was waiting outside.

I ran outside and communicated that we needed some cloth to the driver, who spoke enough English to understand.  We ran back inside to find out exactly where we could get the cloth.  The lady told him and we sprinted out of the post office jumping in the auto and speeding off.  Weaving through traffic the driver was a mad man!  The traffic was thick but we soon reached a market area.  Asking around the driver finally found out where we could by the cloth.  He sped through the tiny alleys full of people and traffic and horns blaring.  It was like a video game!  Go, honk, swerve, honk, honk, BRAKES, speed up, jump speed bumps, dodge cow, horn, swerve!  Finally, we pulled up to a small fabric shop where we quickly purchased the needed fabric. 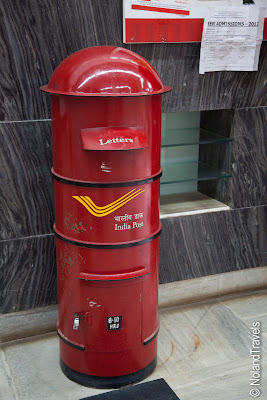 We sped off back to the post office.  Same story.  Flying through traffic, jumping speed bumps, horn blaring the entire time.  I'm a pretty calm car rider and mostly enjoy the chaos of Indian roads, but this time all bets were off.  Dodging big buses and other traffic is a nervous ride on good days, but with a driver in a hurry, it made for a tense ride.

We made it back with 5 minutes to spare.  I hurried up the stairs into the post office where Steph had transferred all our stuff, including the backpack itself, into a make shift box - two office paper boxes pushed together and taped at the seams.  We handed the box and the fabric to the lady.

"Too big", she said.  Oh no, now she was saying the box was too big!  Go get the station chief.  Fortunately, he said all was fine, no problem, so the lady proceeded to wrap the box in fabric.  First, she used the sewing machine to make a wrapper.  Then she used a big needle and some heavy twine and hand sewed it shut.

Finally, she handed us a big red marker after writing "To:" and something in Hindi on the package.  We addressed the package and then she wanted a "From".  From?  We only have a hotel - that's fine, apparently.  After some confusing conversations they said if it doesn't get to the US it will be sent to the hotel.  Mental note - tell the hotel we shipped a package!  Fully addressed, we handed it to the clerk.  Weighed, paid and we were done!  It was 5:45 but the package is on its way.  Whew - what a mission!

I don't know how we made that happen in the short time span but we did.  Now the only question is, "Do you think it will make it?"  I have my doubts...