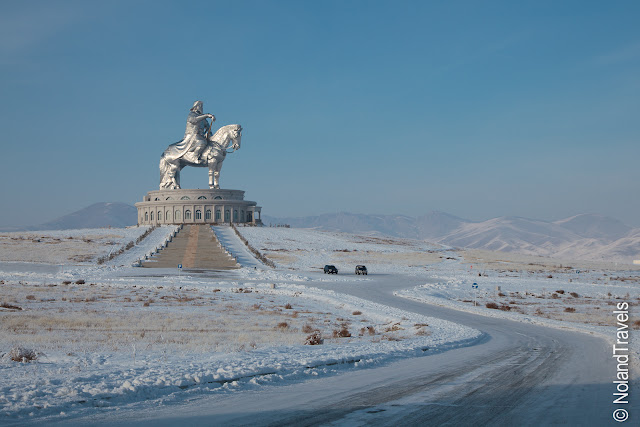 Into Mongolia.  When considering which Trans-Siberian route to take there was no question that we both wanted to go through this huge country which seldom makes news headlines and consequently people just don't know much about - including us.  Fortunately, the long train journey to get to Mongolia gave us plenty of time to read up on history and even a modern travel adventure about the country.  Our visit, albeit brief, would hopefully give us an adventure of our own!  Here goes... 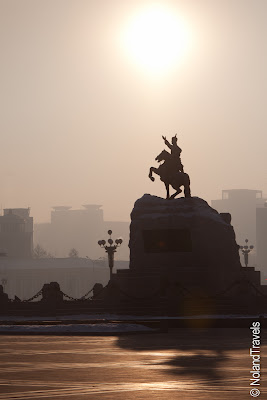 Our train pulled in to the capital, Ulaanbataar, in the wee hours of the morning.  We had arranged a guide to pick us up at the station which in hindsight was a good call because it was cold and still dark!  Times like these, being faced with a new or challenging environments, are when patience is hard to find.  We had finally adapted to the tropical climate on the train so the extreme cold was a shock to the system.  Once out in the elements, we were glad we didn't have to try and arrange our own transport to the hotel.  Agreeing a taxi price in that weather could be dangerous in more ways than one.  Have a read of our initial arrival.  It all went smoothly as we quickly met our guide and hurried off to her van.  Next stop - the hotel for a much needed freshening up after 3 days on a train.

Walking down the hall of the hotel we went past a sign which read "Spa".  Now you're taking, I said to myself.  I sure could use a nice luxurious bath after that journey - baby wipes can only go so far!  Entering the ladies room I was excited at the possible amenities that await.  Well, it must be somewhat lost in translation because it was actually a "bath" room - let me explain.

Public baths are somewhat common in Russia, Mongolia and other Asian countries.  This was no different.  It was a big room with an empty large triangular bath in the corner (normally filled with cooler water) and on the opposite wall were 6 low water faucets with sprayer hoses attached.  At each faucet sat a little plastic stool and plastic bowl.  I looked around carefully to make sure I wasn't missing anything...nope, no shower stall, no bracket on the wall to hold the hose like a shower - hmm.  I quickly did the mental travel translation - I'm meant to sit on that plastic stool and use the hose sprayer and bowl to bathe.  Right, this is going to be interesting!  I smiled to myself wondering what Josh was thinking at his no doubt similar set up in the men's room. 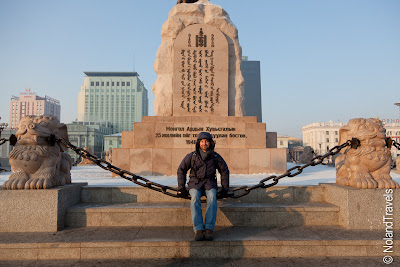 Needless to say, I was thankful that it was so early in the morning and that I had the room to myself.  On top of my conservative nature, I needed time to figure out this new bathing technique which would have been a real test with others around! 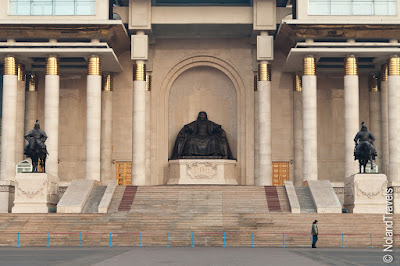 Clean and refreshed, we both emerged from our respective rooms.  Shaking our heads at each other with a smirk on our face. We both laughed out loud knowing how awkward of a bath we had just taken.  But we were clean and now ready for breakfast before a full day of touring.

Our guide, Agi, was all smiles and excitement as she talked about Mongolian culture and showed us around town.  The pride she had in her country was apparent.  We walked around the main town square where Josh's beard started forming ice cycles underneath his nose within 10 minutes!  Even with the sun now up over the horizon, it was still an uncomfortable cold.  We admired the square along with the Abraham Lincoln like Ghengis Khan statue in front of the government building and headed back to the van to warm up. 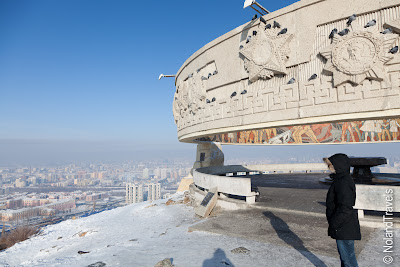 The next stop was the Zaisan Memorial which honors the many Soviet soldiers killed in WWII.  It is perched high on top of a hill that provides a nice view of the city including a huge Buddha below.  Sitting in the cozy warm van in the parking lot, Agi looked back at us and said, "Do you want to climb up?"  Easy answer, of course.  "Ok, well if you don't mind I'm not going to climb up.  It's too cold and I've been up many times", she said.  "I'll just wait in the van."  We had a quick second thought but threw on our gloves and headed for the stairs.  After admiring the view long enough that our toes and fingers began to tingle, we ran back down and jumped in the van once again and headed off to the countryside.

Along the way, we stopped in a small town to pick up the chef - a young lady who would be our cook at the Ger camp later that night.  Agi kept raving about our cook and how lucky her boyfriend must be which excited us for dinner.  One thing we quickly realized is that most of the Mongolians we met have a good sense of humor.  Agi and the driver were constantly making jokes and carrying on.  When we stopped to pick up the chef, she ran towards the van and just as she got to the door the driver, starring in his side mirror, slowly moved forward, chuckling to himself.   He finally let her in after a quick bang on the side of the van.  They all had a good laugh after she shut the door.

As we started heading down the road, we realized we take for granted a good quality road network.  Mongolia must have some of the world's worst roads.  Making our way out of town where the roads were rough, the road conditions quickly deteriorated even more - pot holes, patch work and just general sections of missing roads. Off the main road it quickly became just a dirt paths.  It was mind boggling and interesting all the same.  At times the driver chose to drive in the snow next to the road because it was faster and smoother. 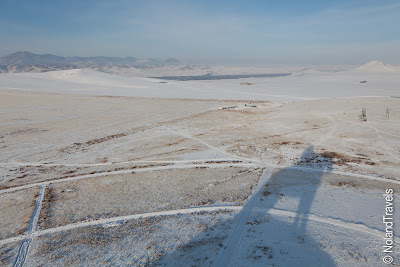 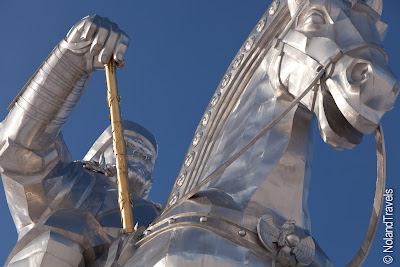 However, what they lack in roads they make up for in scenery.  I'm going to give the road workers the benefit of the doubt thinking that they most likely are too distracted by the scenery to fix the pot holes.  Rounding a corner at the top of a hill revealed a monumental view of vast expanse and simple country side.  All blanketed beautifully in white snow with a mountain range hiding out in the background.  For that moment the bumps in the road and the cold simply disappeared.  What a site!

As we drove further out of town Agi said she had a surprise for us.  Knowing Agi this could be a trick.  We were out in the middle of nowhere so what could she have up her sleeve.  Then on the edge of the horizon a reflection of sunlight grabbed our attention.  It was the new shiny stainless steel statue and memorial of Ghengis Khan.  At 130 feet tall, it was easily recognizable amongst the countryside.  There he was, perched on a horse starring out into the distance, no doubt admiring the view.

Within the base of the site were two excellent exhibitions - two private collectors had loaned their immaculate collections of Mongolian relics - everything from coins to swords to arrow tips to ornate jewelry and complete sets of chain mail armor.  Everything piece was beautifully presented with dates and descriptive text.

To top off the experience at the site, you could actually take an elevator and some stairs that lead out to a viewing platform on the horse's head where you could look up at Ghengis and admire the vast countryside where he once ruled.

As we left the monument, Agi kept helping us work on our pronunciation, its "Ching-gis Khan" she kept saying.  We tried to say it like she did but couldn't.  We were just to distracted by the monumental surroundings.  Regardless, we drove away in awe of just seeing something truly amazing and it was only the morning! 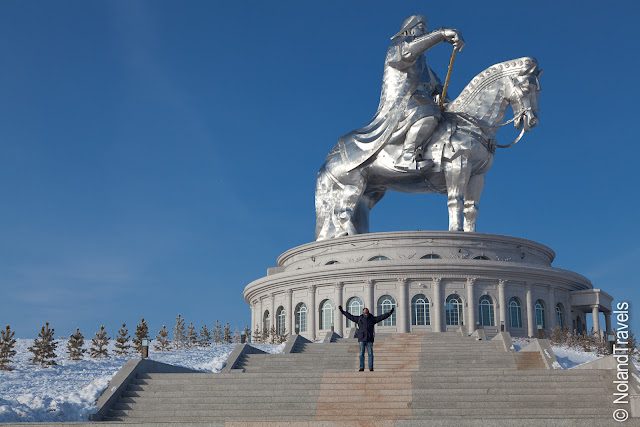