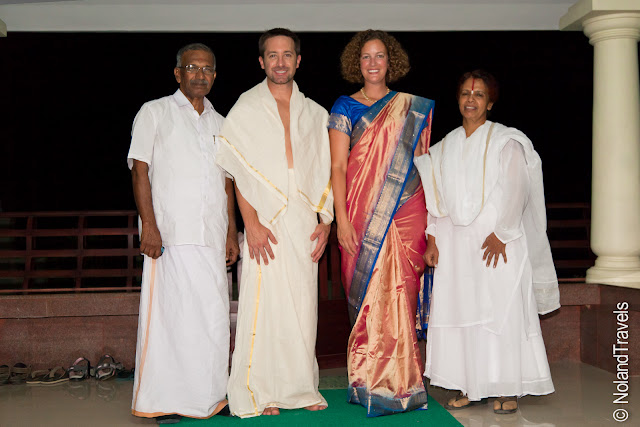 Say hello to The Ravindran Family!  They have been our unbelievably gracious hosts in South India, allowing us to stay in their beautiful home amongst the iconic paddy fields and banana plantations.  How do we know them?  Well, their son Rupesh, is a good friend and colleague of mine who I worked with in London.  He invited us to stay with his family and we were happy to accept his invitation.

All throughout our stay we were cared for like family.  Even though we had never met we were welcomed with open arms.  So, it was only fitting that we'd be invited to meet the more of the family.

It was the middle of the afternoon and we had just finished our normal coffee and homemade Indian sweets break. Mrs. Ravindran called us over.  She opened a cabinet and presented me with a traditional Kerala men's outfit, a doti.  It was a cream white, trimmed with real gold.  I was stunned.  Then she looked at Steph and dug in her cabinet pulling out an outfit for her, a traditional Sari.  "For you.  Beautiful.", she said, handing it to Steph. 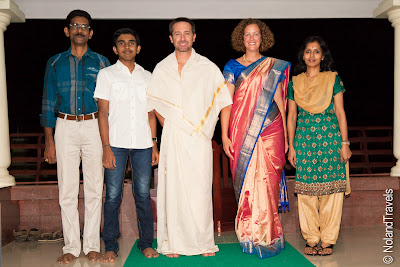 Not knowing what to do, we said thank you a few times and then just looked at the new clothes.  It was too much.  Our minds were racing on how to handle this from a cultural point of view.  We knew we should at least try them on, but how?  How do you wear these new outfits? No clue.

Steph tried on the pre-made sari top immediately and Rupesh's sister, Reshmi made the necessary alterations to make it fit perfectly.  Mrs. R said we would wear them to visit a temple in Trivandrum and to visit her family.

When it came time to don our new clothes, they knew we'd need a little help!  Honestly I think they were more excited than we were to see us in the traditional clothes.  No problem, we're game!  Steph had assistance from 2 smiling ladies, both Mrs R and Reshmi (in the green on the right).  They went into the bedroom and helped her put on the Sari.  It was a full team effort, lots of wrapping and folding the silk all held together with few safety pins.  She came out of the room all smiles, showing off her new look.  However, walking took a little effort.  It was wrapped snugly and brushed the floor, as its meant to be, she learned.

Then it was my turn.  I asked Rupesh's brother, Suresh (in the blue shirt to the left) and another family friend Babu, to show me how to put on the doti.  First you stretch it out and fold it in half.  Then wrap it around your waist keeping the gold trim straight down the side of your leg.  Once its wrapped you pull it tight and tuck in the edge.  Its actually not all that hard but for a first timer I definitely needed help.  The last thing I wanted is for it to come loose and fall down!  The top was just folded in a triangle then wrapped loosely around my shoulders. 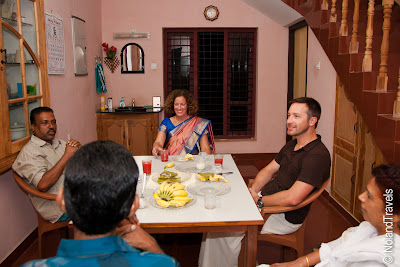 As I've said before, you must go with the flow when traveling.  This was no exception.  We were now both traditionally dressed, but now what?  Luckily we didn't have to decide.  We were directed to the front porch for some photos with the rest of the immediate family.

Once the photo shoot was complete, we were off to visit the extended family. We had gathered from a few conversations that we were going to visit some other family homes in the area.  Not 100% sure of exactly who we would be visiting, we just buckled up to see what was next.  Before we left I was able to change shirts to be more comfortable. (Traditional day-to-day clothes for the Keralan man is a doti and regular shirt)

Pulling up to the first house, only a few minutes away, a smiling family emerged welcoming us into their home. This was the home of one of Mrs. R's sisters. We made a few introductions and then headed to the dining room to visit.  There was food spread out for us to try.  Watermelon juice, bananas, and some rice cooked in a banana leaf with grated coconut filling.  Is this dinner, we wondered?

Sitting around the table we had a lot of conversation as both parties were so curious.  We were soaking up the culture and they were learning about us.  A lot of laughing and carrying on, coupled with delicious homemade snacks and fresh fruit made for an entertaining visit.  Steph was even invited to one of the daughter's room where she received a gift.  A box of bangles and a keychain, complete with a message on the outside of the box that started, "Dearest Steph..." This just highlights the kindness showed to us by this loving family.  The visit was topped off by a singing performance from Madhav (Rupesh's nephew) and one of the girls.

One note for you travelers out there, the sister's family kept reiterating that if we had any friends who would like to visit, they would love to show you around. 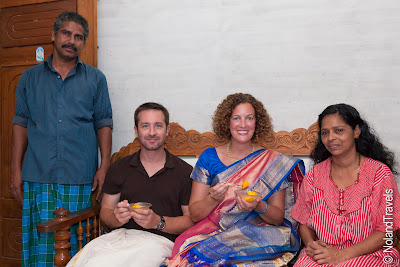 Anyway, saying goodbye, we were off to another house down the street.  This was the home of one of Mrs R's brothers who you can see in the photo to the left.

Entering the house my doti was failing down.  I had tried to pull it tight but wasn't having much luck as Suresh noticed and sprung into action.  He quickly tightened my doti around my waist and everybody else chuckled. Awkward but no worries.  After the introductions, yet more food.  This time a portion of fresh mango!  So refreshing!

Back at home we still had one more thing on the schedule - dinner!  An event in itself.

Looking back, I hope the family enjoyed the evening as much as we did. I know Mrs R did!  She was all smiles the entire evening.  It was such a privilege being able to visit the families' homes.  They were all so friendly and welcoming.