Fireworks and a new President 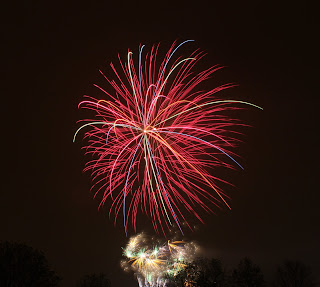 So the fire works aren't for the new president but instead part of a celebration around a failed attempt to blow up the houses of Parliament in 1605 known as Guy Fawkes Day or Bonfire night. To make a long story short Guy Fawkes was caught guarding quite a few barrels of gun powder in the tunnels under Parliament in a failed attempt to overthrow the king. As the saying goes, "Remember Remember the 5th of November".

Basically everyone around the UK celebrates by shooting off fireworks and outside the city lights, they celebrate with big bonfires. Why the celebration? Here is a quick read why but its not as you'd think from the setup. They didn't burn Guy Fawkes as you might of suspected although he was hanged, drawn and quartered which might, in fact, be worse. In any event it makes for a good excuse to light some fireworks and get outside on a chilly November evening. The photo was taken at Clapham Common and I uploaded a few more here.

Now a few things before I go.

All of our recent visitors are back state side but we are back at it next weekend. This time in rugged Iceland. Keep your fingers crossed we can catch the northern lights.

Last but not least. Here's to all who voted. Whether you are an Obama fan or not, I can tell you that there is a lot of enthusiasm from here and other countries around the world for the future of the US. Hopefully this can help us turn the corner and get a handle on the current issues we are facing. As one paper put it, "the America we love is back". So as of Tuesday its a bit easier to be an American abroad than it was on Monday.
Posted by Unknown at 4:08 PM