Glacier Journey to the Top of the World 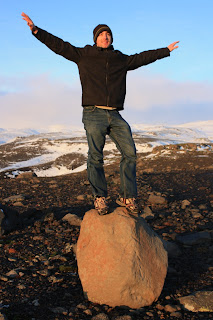 Oddly enough our hotel rented cars and with a open day and spur of the moment decision we took them up on the offer. After only 5 minutes, one small form to fill out we were driving out of the city to try and get a closer look at one of Iceland's glaciers. Renting a car doesn't get much easier than that.

We set our sites on the south coast and headed down the ring road, route 1. One good thing about Iceland is that almost everything of interest is off route 1 so its not hard to find what you are looking for, that is once you go in the right direction out of Reykjavik...

With so little day light this time of the year we were going to be cutting it close to make it to the Myrdalsjokull Glacier before dusk. It was a few hundred kilometers and there were other sites to see along the way.

Once you get outside of Reykjavik, the country side of Iceland really opens up. It is very easy to see how vast and sparsely populated it is. Miles would disappear with out seeing much of anything but natural country side. For lunch we didn't have much time to waste nor had any clue if we would find a better option so we stopped at one of the only easy places to grab some food, I bet you can guess - yep, KFC. For all of our traveling we just can't get away from good ol' Kentucky.

After a few small rustic villages we came across a waterfall. Not on the scale of Gullfoss but much more traditional waterfall. A big noisy falls set in a little cove shielded by its misty spray turning into a quiet peaceful stream just right for a fresh drink of crisp cold water.

For a while it was just Steph and I at the falls and it seemed like there was nobody else around for miles. We took some fun photos and walked up through the mist to get close to the falls. As we were leaving another car pulled up. They too were heading to the Glacier so we decide to caravan with them since they had a 4x4 and we weren't sure what the road to the Glacier would be like.

The road up the mountain seemed to wind forever, gradually getting more and more difficult for our small little car. I was a bit nervous but we were following our new friends so we pressed on. Finally we reached the top and it couldn't have come too soon as it quickly turned very icy. The glacier was still some ways off but there was a lodge type building that appeared to be a base camp for the snowmobile and off road jeep tours of the glacier. But there it was, glowing white from the reflected sunlight. Neato.

When we got out of the car we were hit by the huge gusts of COLD wind. It was a brisk reminder of exactly where we were but hey what can you expect being on top of the world!

A couple of side notes to pass along. The fresh air was such a treat. I'm not sure it gets much more natural than that anywhere. Also we accidentally lost our camera lens cloth getting out of the car. Thanks to a big gust of windy our little blue lens cloth is blowing around somewhere on top of the mountain...

At this point the sun was fading fast and not wanting to risk getting stuck on top of the mountain we headed back down. We drove a little ways where the snow started to clear and stopped for more pictures. This is where we had the best views of the trip. We could see for miles. The glacier in the background looking down to the coast. We set up the tripod, secured it a bit better this time to avoid the camera blowing off the mountain. Here's a good shot of us.

Back at sea level we pressed on further around the ring road which turned out to be a good decision because we found ourselves in this small village on the coast called, Vik at dusk. For some reason I had an urge to get down to the water front so we took a small little gravel road leading down to the water where we found a black sand beach. This was totally unexpected. However it was a little different than the last black sand beach in Hawaii. For starters we had the entire beach to ourselves. However this wasn't a place to layout and catch some sun but it was a great few minutes enjoying sights and sounds of the birds nesting on the steep cliffs behind us and the waves crashing down. Off in the distance were some incredible sea stacks Steph nicknamed the trolls.

I won't go into to much detail here but the Icelandic people have superstition about trolls. For instance when they build a new road they have a committee that has to explore the proposed route to make sure they will not be destroying any troll's homes. If they disturb the trolls bad things will happen.

By this time the sun had set and it was time to head back to Reykjavik. It was only 5 o'clock but what adventurous a day!

Here is a good map of Iceland that shows our route, from 1 to 8 on the map.

Tomorrow is our TV debut, so stay tuned...
Posted by Unknown at 2:59 PM