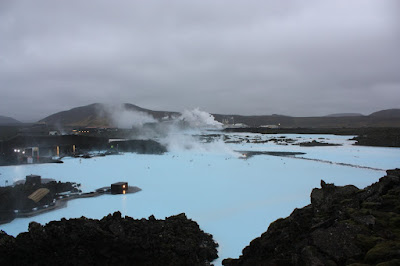 Our final day in Iceland was a trip to the Blue Lagoon. What is the Blue Lagoon you ask? It is a geothermal spa rich in minerals in a lava formed pool that has natural revitalizing qualities. Basically its an excuse to kick back, relax and enjoy a hot bath Iceland style.

Being a spa, we decide to go all out and each have a massage. You should know this wasn't any ordinary massage. We laid on a floating mat in the lagoon then were covered by a hot blanket soaked in the hot water for the massage. You'd think it would be freezing but it was nice and toasty. We'd recommend it to future travelers as a great end of a trip! And to make it even easier its on the way to the airport...

On arrival we could see the Today Show setting up for another live broadcast except this time the broadcast was in an hour or so. After making a few calls home to tell people to tune in we covered our faces in the blue lagoon mud and were right behind Al Roker during the broadcast. Unfortunately we weren't interviewed but we did make it on TV. I've been searching for a video online but I can't find one.

Now back to the lagoon. There are certain parts of the water that are almost scolding hot. Basically the water is pumped in from the nearby geothermal power plant straight from the Earth's core after its cooled down a bit. This makes for just the right temperature to soak in. The water is about 100F and the air temperature is about 32F. Needless to say there is a huge shock when you get out of the pool and run to your robe. Its so cold it actually stings and SHOCK might be a better description. At first you don't think much about it then your body wakes up and realizes...

Its actually quite amusing soaking in the pool watching others run around in shock as they get in and out of the pool trying to find their robes. I'm sure we gave the same enjoyment to others because its cold!

We couldn't have asked for a better way to end the trip in Iceland.

Blue Lagoon Photos
Posted by Unknown at 7:54 AM