Hunt for the Northern Lights 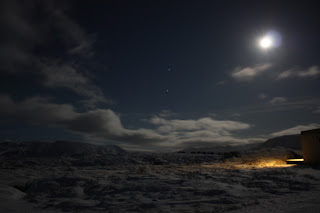 Winter (roughly October through February) is supposed to be the best time to find the Northern Lights. I can't tell you easily what exactly they are (see Auroa in wikipedia) but I can say I was a skeptic. All those fascinating pictures of green cloud-looking streaks filling the sky...I was sure someone had worked their magic in photoshop. So I was anxious to be proven wrong.

We set out from Reykjavik on a large bus, filled to the brim with people. Apparently, the tour had been canceled for the past 5 nights. As our guide from Cape Cod, of all places, will tell you, the conditions have to be right to find them and there are no guarantees in the Northern lights business. First, it has to be a clear night, no clouds and preferably not a full moon. Then the atmospheric ring of particles need to be circulating in the area. To find this out you need to check your local northern light forecast much like a weather forecast. And finally you need to be away from light pollution, which in Iceland isn't a problem due to all the vast wilderness. So, we set out on a near cloudless sky, a full moon and a low forecast given for the lights.

On the way we were able to see Yoko Ono's Peace Tower dedication to John Lennon. Here's our photo.

We went to a large national park where it was truly pitch black except for the glowing moonlight reflecting off the snow. We stood there for ages all staring in to the sky waiting for something to appear. It was B-I-T-T-E-R-L-Y cold. Josh and I had to take turns going back on the bus to warm up. While we were waiting we did see a meteor fall - it was like a white firework falling from the sky - quite cool! I saw a second one while I was talking to Josh...it happened behind him.

Then in the distance, low on the horizon, we started to see a faint green glow...and then the glow got a little more vibrant. It was the Northern Lights! We did manage a couple pictures but they aren't very good. The glow only stayed around for a few minutes and we were doing 30 second exposures, hence very few pictures. But, we did see them - I was proven wrong - there is truly something that goes across the sky like green clouds that look like they are straight from a modern sci-fi movie.

Now a bit more on the lights. Apparently, you can only really see them from around 9pm to about midnight. At this point we had waited and waited and it was after midnight. The clouds moved in and we started to head back to town.

However on the ride back the tour guide pulled the bus over on the side of a rural highway saying he saw them. Sure enough, way above us, straight up in the sky we saw vast light green haze. They were quite faint but you could see the extent of them streaking across the whole sky. They were there-and-gone quickly again, but we could get an idea how neat they could be.

All in all, it was a slightly disappointing evening. The tour guide called the night a 1.5 out of 10 as far as viewings go. Not good at all, but hey, we were lucky enough to see them. The northern light tours were canceled for the following two nights during our stay so I feel rather fortunate that at the tour even operated that one evening while we were there and that we did get a glimpse of the mysterious northern lights!

On a side note, the next morning my cheeks had a slight purple hue and were radiating heat - I had wind burn! Yikes. But I DID see the Northern Lights!
Posted by Unknown at 7:17 AM