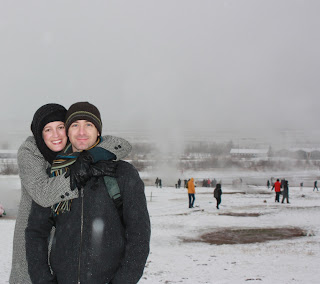 Geysers, hot springs, mountains, lava fields, glaciers, water falls, a continental rift valley, the first parliament and a hearty Icelandic lamb and vegetable soup. What more can one ask for in a days work..err travel?

This is the Golden Circle. A natural, fresh and rugged part of Iceland not far from Reykjavik that makes for a great day trip.

Up early, as became the trend in Iceland, we headed off in the snow towards the Þingvellir National Park (pronounced Thing-vel-ear) where the first Parliament was founded back in the 900s. It is also the home to the Mid Atlantic Ridge or what tectonically speaking separates North America and Europe. Iceland is the only place where you can see this on land and where you can actually walk through the rift. In most of our daily lives we have no clue that tectonic plates are real and continually moving but in Iceland, a world far from normal, it's normal. Walking through the rift was hard to comprehend but I have one question. If the rift is where the plates have separated, what am I walking on IN the rift?

Next we moved on to Gullfoss. What a name. It sounds so dangerous. Gullfoss is an impressive waterfall generated by the massive amounts of run off water from the nearby glacier that stair steps down into a massive valley then makes a huge left turn. We hiked up to the falls to get a better view point where you could really see how rugged and mean waterfall is, just like the name implies.

We can thank a young woman for Gullfoss being what it is today. The story goes that back when Iceland was making huge investments into hydro power the government had ear marked the valley that contained the falls for a dam and power plant. The young woman threatened to throw herself off the falls if it was not spared. Luckily it was spared and turned into a national park. On a side note, the wikipedia article disagrees with this story but we heard it from multiple Icelandic guides. Who knows...

A short hike from the falls was our scheduled lunch stop and on our way we had our first encounter on this trip with the Today show. They were setting up for a live broadcast from Gullfoss. We will see them again in a few days at the Blue Lagoon.

For lunch we helped ourselves to a hearty Icelandic lamb and vegetable soup. Cambell's Chunky soup can't compete. What a treat on a chilly snowy day. Homemade, hearty and GOOOOD!

The final notable stop was to visit the grandfather of all geysers, Geysir. The English word geyser is derived from Geysir in Iceland. Today Geysir is only rarely active after things such as earth quakes but his cousin Strokkur only a few feet away erupts every few minutes.

Interesting factoid, every week something like 7 tourists get burned by reaching out and trying to touch the water erupting from the geyser. It sounds stupid but its hard to resist even after knowing better. You just have a natural instinct to get as close as you can then touch the water. Even expecting the eruptions to happen every few minutes they are always so unexpected bringing a happy grin to your face. I was able to get a few good action shots of the exploding out of the ground. Such raw energy, I like it!

Tomorrow we go on a glacier hunt...
Posted by Unknown at 7:52 AM