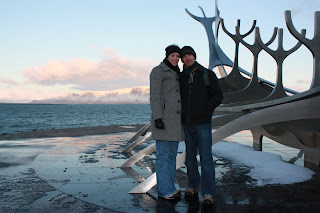 And what a welcome it was! We jumped off the plane and followed the masses in to the duty free store. Things are so expensive (yes, still, even after their currency has taken a dive) that everyone fills their bags with food, drinks and other goodies from the duty free in the airport to avoid the almost 23% tax rate. Loaded down with luggage and duty free, we caught the 45 minute bus to Reykjavik. We arrived at our hotel around 2:00am and promptly went to bed so we could catch some z's before our 8:30am tour began.

The Reykjavik city tour was nice, nothing terribly exciting, but out tour guide's commentary was worth it. He pointed out all the huge new apartment buildings being built and noted he had no idea when they would now be finished given their economic woes. We drove through the financial district seeing all the banks that have been making the headlines. You can tell the Icelandic people are hard-working and live a high standard of living, but their commentary on the current times is rather pessimistic and uncertain. Josh and I decided that if they can't recover their financial services status, at least they have a goldmine in tourism - Iceland is a stunning, rugged and fresh country, well worth a visit.

Tourism also brought about a disagreement between Josh and myself. I was loving the icy harsh conditions and Josh was saying he would prefer to be there in the summer. I do agree summer would be fantastic and would allow for some superb camping opportunities and the midnight sun, but winter gives you the rare chance to catch the Northern Lights which I think is the ultimate winning factor for me. Josh kept arguing that you could see Northern Lights in several places in the world and it wasn't worth the trade off for the short winter days, it was barely 6 hours in November, Hmm. We never settled this disagreement, so we will let you all decide. (You might want to read ALL the Iceland posts before you decide).

Additionally on tourism and their economy - there is no tipping. Strange but true - and probably the first place we have ever been where the waiters have no expectation of tips. Admittedly, we did leave a couple tips here and there as it felt strange to just walk away. We heard the service is included in prices...but still...

After our city tour, we toured the rest of Reykjavik on foot - its a small town so this should have been easily accomplished although the freezing, windy weather made it a bit challenging. The picture you see above took considerable effort in trying to set up the tripod with near-numb fingers and it almost cost us our camera. While we were smiling for one of the pictures a gust of wind grabbed the camera and tripod and it fell straight over to the ground. Our faces must of been of pure horror as it happened (no, the camera didn't capture those looks, it should be smarter than that) but fortunately, no harm was done - just a couple small scratches on the corner of the camera body. After that, we headed back to the hotel. The cold wind was so strong that it was going right through our wool coats. We decided we'd seen enough and gotten numb enough so we'd just wait out the rest of the day in the hotel until our Northern Lights tour that evening.

Reykjavik Photos
Posted by Unknown at 5:32 AM