Ash & Ali - in for a whirlwind week 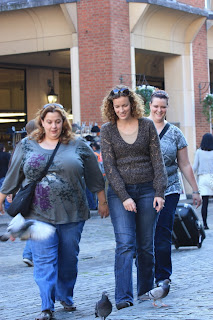 Ashley and Ali arrived last Sunday and stayed with us for a week. It was a whirlwind week because they arrived then went to Dublin for an overnight on Tuesday then left on Saturday - it went too fast and I'm sure they'll agree. Although we did have time to chase the pigeons in Covent Garden as you can see in the photo.

However, that does not mean that they weren't able to do it all in that week! Sunday we spent the day walking them ALL around London touching on nearly all of the major sites and locations. It's purpose was to keep them awake to kill the jet lag and also to familiarize them with the area so they could manage easily on their own the next day while we returned to work. I'd say it was effective because we gave Ali a blister and they both slept in the next day!

On Monday they had a good day touring and we met them for dinner at Ping Pong - a hip dim sum restaurant right on the Southbank. The food was great as was the experience!

Tuesday morning they headed off to Dublin on their $20 return flight! Yes, they scored an awesome fare hence the quick overnighter to Dublin. After some delays at Gatwick they finally made it to Dublin. Although they lost time during the day, they made up for it that night! They went to a musical pub crawl and met many great people with which they partied to the wee hours.

After recovering from Dublin, they returned to London and then went to Hever Castle on Thursday. I was meant to go with them but woke up sick so I gave Ashley all the info she needed to ensure they took the right trains south to the Castle. It was a worthwhile adventure for them as they had a blast! Ali said she hadn't laughed that hard in a while...all due to water obstacles in the water maze (think hedge maze but instead paving stones over water while water is surprisingly sprayed on you to make it more a challenge)!

After their Castle adventure, we took them to Banana Leaf - our favorite place - and the place we take all our visitors! Its a fabulous Asian-fusion place that makes a mean chili pork (or chicken bakar jawa - pick your poison).

Friday we had a girly day (Josh was at work, I was off work with them) heading to the Portobello Road Market and Notting Hill. After spending some money on some great little things for ourselves, we made our way home to have a calm evening before their Saturday morning flight.

All in all, I think they had a great time - I know we were glad to have them!
Posted by Unknown at 3:04 PM