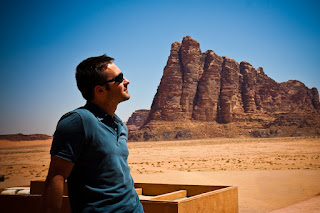 In the south of Jordan lies a protected area of dramatic desert including huge sandstone mountains, sheer cliff faces and wide sandy valleys, called Wadi Rum.  The area is still home to Bedouin tribes and we would get to experience camping Bedouin-style that night.  We hoped in old 4WD safari vehicles and took off to follow in the footsteps of Lawrence of Arabia.

We cruised through the valleys stopping at various sites including the seven pillars of wisdom, Lawrence of Arabia’s spring, his house, sand dunes and a few canyons full of ancient rock carvings and inscriptions. The deep red colors of the sandstone and sand were amazing but quickly stained our feet to look like a bad dose of self-tanner! 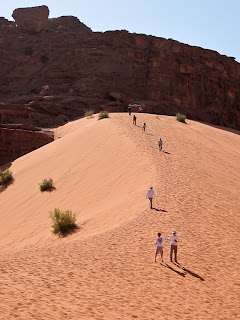 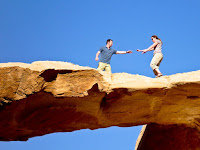 During the safari one of the biggest highlights was a rock bridge with a somewhat scary climb. Oh and I know Natural Bridge in Kentucky will need a visit when we get home. Anyway we had to climb up a fairly slippery rock then creep around a ledge to the stairs up. Fun!

We stopped in the shade of a sandstone mountain to have a simple picnic lunch consisting of pitas, amazing Jordanian hummus, a tin of tuna, a jar of honey, little triangles of soft white cheese and a pot of diced peppers.  An odd mix, I know, but all amazingly good together!

To burn off lunch we faced another dune climb. The dune looked amazing, a towering rose colored sand ramp coming off the side of one of the mountains. Luckily it wasn’t near the task as the one in Egypt. The run down was fantastic and is such a great reward for the effort of climbing. At the bottom it hit me that we should go again, this time on a rug. Come to find out, sliding down in that manner is dangerous for boys and not worth the risk. We didn't have a rug anyway, oh well.

So with the sun heading to the horizon we made our way to a traditional Bedouin style camp. The tents were black and made of camel hair nestled under some extraordinary sandstone mountain cliffs that opened to a valley. They were arranged as 3 sides of a square with mats and seating in the middle. Out back was a toilet and a tent for the animals to keep them safe at night.

Earlier in the day I bought a traditional Jordanian headscarf, the red and white-checkered variety. One of our drivers was a sheik and used to be a bodyguard for a previous king. He was of course wearing the headscarf so he showed me how to wear it.  I went for the military style.

With sunset quickly approaching we headed to “sunset point” a few minutes walk from camp. Nothing too fancy, just an elevated position with a clear view of the horizon due west. 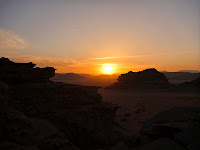 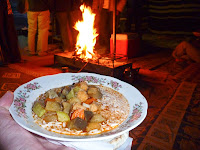 Dinner was in traditional style cooked in an underground earthen oven. The smoked chicken and veggie soup with rice was good and hearty, really hitting the spot after a long day of safari-ing - it's rough riding in the jeeps...you feel every bump.  Although, at this point, I was starting to get dodgy guts (our group's phrase to explain traveller's sickness), luckily for the first time, and Steph had to just tell me how good dinner was. After dinner we started setting up camp for the night and conversing with the drivers and guides.

Throughout the day one of the young drivers, Mohamed, took a liking to me and was constantly quizzing me about things to brush up on his English. I took him up on his offer to teach him English in return for some Arabic lessons. Being a total American I talked him through words like awesome and cool. The others had a good laugh and I think he really enjoyed it too. Then it turned technical when he found out what I do for a living. He wanted to know more about email and Facebook. Even in the dessert technology is taking over. What a nice guy. He ended up giving me his email address. In a weird twist of customary etiquette it is acceptable to talk about salary here. Steph can't wear shorts but he can ask how much I earn in a year. Too funny. I politely declined to answer his question.

Finally to end the day we slid into our sleeping bags under the stars. No tents for us. We braved the cool desert night and slept outside. I have never seen stars so bright. There isn't even a hint of light pollution and dozing under the billions of stars was a fitting end after exploring this extraordinary landscape.

Wadi Rum Photos
Posted by Unknown at 11:08 AM