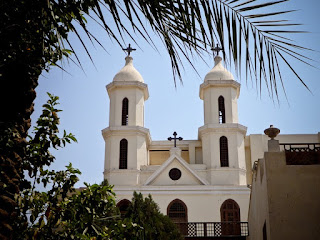 Fresh off the overnight train we had a free day to relax, err, explore! This gave us an opportunity to see some more of Cairo; the largest city in Egypt and Africa, of some 17 million people, has some good sites buried in all that chaotic traffic and pollution, other than the pyramids of course.  Speaking of the chaotic traffic, have I mentioned that crossing the street is a wild adventure here?  They somehow make 4 lanes of traffic out of 3 lanes of road and to cross the street you have to find a gap and just go.  As long as you don't hesitate they will dodge you.  No worries, right?!  After we got the hang of it, we all said that we had learned to "walk like an Egyptian"! 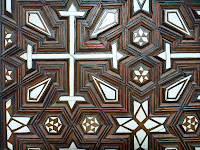 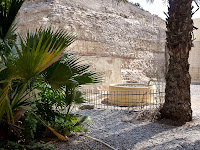 Having mastered the "walk", the first stop for the day was Coptic Cairo, the hold up for the Christians of olden times. This area is full of biblical history and as a result, loads of churches. We specifically wanted to see the Hanging Church that dates back to the 3rd century AD and is built on top of an old fortress (hence why it's called the hanging church). The walkway to the church had some neat mosaics leading to two tall bell towers and a staircase entrance. Inside we found an array of fantastic woodcarvings and a quaint dimly lit sanctuary.

After admiring the church we were off to wonder through the narrow streets to find the Ben Ezra Synagogue where baby Moses was supposedly found floating in the reeds. Interestingly, we had to pass through security to get into the synagogue, although we don't think the metal detector was plugged in! It has 2 floors, the lower one for men and the upper for women, all decorated with a geometric design and floral patterns. Out back was Moses’ well - that picture, taken through a gate, was as close as we could get.

Staying with the religious theme, we left Coptic Cairo and headed to Islamic Cairo to visit the Al-Azhar Mosque. To save some time we opted for a couple taxis, which is always an adventure! After our driver woke up his son who was snoozing in the passenger seat, we hopped in and had a fairly uneventful 2 taxi race to the mosque. 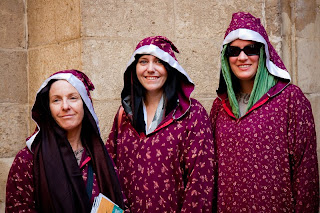 Entering the mosque, we all had to ditch the shoes and Steph was made to cover up. They provided a robe, for lack of a better word, that was a full body maroon flower pattern outfit complete with a white-trimmed hood. Tremendous!  The girls looked liked strange elves or something.  Oh, the things we do to see the sites... but normally they are worth it and this was no exception.

The mosque is very beautiful and is considered one of the more exquisite in Egypt. After entrusting the mosque guard with our shoes we headed into the expansive main courtyard... it's an amazing square of glistening white marble surrounded by dozens of ancient white columns. A little unsure of proper mosque etiquette, we just stood and admired the square.  The serenity of it was evident - some local guys were there for prayer and some were just having a nap on the carpeted areas in the shade! Looking up we were rewarded with a close up view of the 5 minarets we had been admiring from other parts of Cairo. The mosque is also home to the second oldest university in the world, specializing in Islamic studies.

Next up was the nearby Khan El-Khalili bazaar to do some shopping. It was a busy stretch of shops and we quickly found that they did not barter with you as much as other countries. We would get chased down in Istanbul if we walked away...but here, they let you walk away! Even though we had less bartering power, we ended up getting a silver pyramid charm for Steph's bracelet and picking up a brass Aladdin lamp - 3 wishes, please!

After bazaaring, our free time in Cairo was almost up because we had to get to the Pyramids Sound and Light show! We tried to grab a taxi but two “broken meters” later we headed off to the metro, a good fifteen minute walk away through some busy street markets. Luckily, we ran into enough people that understood “Metro” to get us in the right place. There were a lot of unexpected turns to get there but it was a good adventure through a very local part of Cairo. 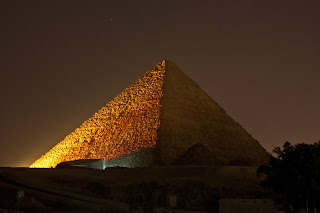 As I just mentioned we had tickets to the Pyramids Sound and Light show. I know, I know, the lights shows are supposed to be notoriously cheesy, but we only had seen the pyramids for a couple hours and wanted one last chance to enjoy them without all of the hustle and bustle that was so overwhelming during that first day. No - for the last time, I don’t want to ride your camel!

Anyway, the show was unbelievably cheesy but seeing the pyramids all lit up at night made up for it in a big way. The show was intended to take you through the history of the pyramids while lighting them up in different colors. During the show the voices said some interesting things such as a child’s voice saying, “I have learned my lesson because you beat me” or comparing the pyramids to Westminster Abbey or saying "the greatest architectural feat in history - the straight line" - what? It all gave us a good laugh as we admired the pyramids and sphinx.  They did have some good parts as well including the green lights that projected the path inside the pyramid to the tomb.

All in all, it was worth it just to see the pyramids again. What an amazing site they are!
Posted by Unknown at 7:20 AM