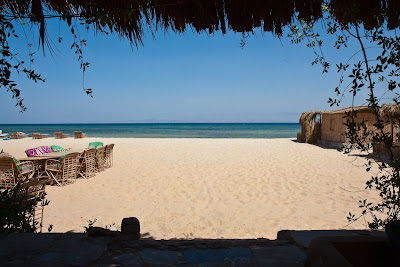 Ok, so imagine simple grass huts made out of bamboo and palm leaves, resting on soft, cream sand with the beautiful turquoise Red Sea at your doorstep.  The huts are complete with a front porch, hammock, rugs and a brightly colored mozzie net inside. Yeah…this was Sawa Beach Camp - our home for the next two nights..  We lucked out and got one of the "million star huts" that was at the seafront. That's the one in the picture, #4, awesome! 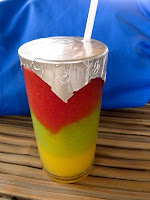 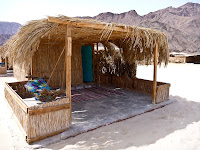 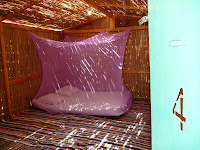 Upon arrival at the camp, we received welcome drinks – a fruit cocktail of fresh orange, honeydew and watermelon – it was a layered drink of fruit heaven! Those cocktails became a favorite during our stay.

The camp was great although not quite a 5 star camp.  Its only source of power was a generator that only ran about half of the day and night, but it did have the cleanest bathrooms and showers we had come across on the trip! They served a variety of food including fresh calamari and fish – which Josh indulged in. To top it off, they had snorkel rental and all you had to do was simply walk out from your hut in to the sea to find an amazing reef chock full of interesting fish and sea life. (I wasn’t too thrilled to run across the white eels in the shallows though!).

The benefit of the reef can also be the downfall…or at least mine… in that I fell on the coral/rocks that were right at the entrance/exit of the water. We were coming in from our snorkeling and I stepped on a particularly sharp slab of rock/coral. Because I was only standing in a couple feet of water I fell over and sliced a couple toes and got a coral imprint on my left hand and thigh – ouch! Nothing a little antiseptic creme and some band aids can’t fix! 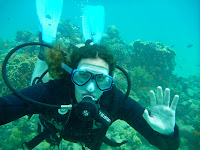 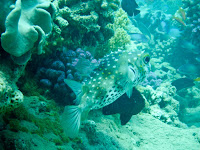 We had two days to recover from the hectic pace of the trip thus far in this paradise.  In our typical style, we only took about half a day to relax in the sun then needed something else to do.  Scuba Diving! Josh had been scuba diving in Hawaii and I had tried it in a pool once so it was lucky for us they took un-certified beginners for an introductory lesson because the Red Sea is supposed to be amazing. The guide would control everything and just kind of pull us along.  Josh went first (we had the same guide, so we went one at a time). We got in the full gear complete with scuba suit and water booties.

When Josh was finished, I just met him in the water and they passed his oxygen tank to me and we were off. The guide gave us several hand gestures to indicate if we were ok, had a problem, to say “danger” (if you ran across a dangerous fish such as the lion fish or eels ) and also up and down. So, I said was ready to go and we went under in about 5 feet of water. After about 7 seconds I gestured that I needed to go up – it was so weird to breath under water and even though I had been snorkeling loads of times, this just felt strange to me. 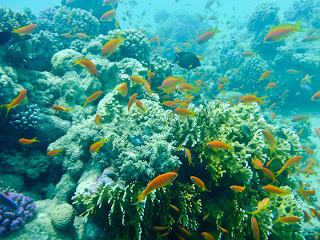 After I composed myself, I said I was ready to go again and we went back under. I started leaning forward, head first, and just kept going…..and ended up flipping over in the water. We were just barely under the surface so we surfaced again and I asked why I flipped…the guide didn’t know. Oh well. We kept going and finally made a good descent. The underwater scene was surreal – Josh agrees. There were lots of fish and it was so peaceful.

Thanks to our new underwater camera, we were able to capture some of it in pictures. What good fun!

When we finally surfaced, after about a half hour, the guide told me that we forgot to take Josh’s weight belt when we made the equipment handover! That’s why I flipped in the water and also why I had a hard time sinking.  Oops! 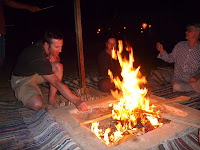 For our last night in Egypt, we had a nice seafood dinner and then asked if we could build a fire to roast Marshmallows on for make shift s'mores ( Hobb Nobs with Chocolate ).  The owner just grabbed a spare bamboo chair, broke off a few pieces and lit it on fire in one of the fire pits.  Whatever works, I guess!

Staying at the beach camp was such a good change of pace.  Naps in the hammock, snorkeling at leisure, and beach volleyball made for a great two days.  Plus we could even see Saudi Arabia across the narrow Red Sea - that might be the closest we ever get to Saudi so it was intriguing to see it across the way. We truly enjoyed this relaxing break but had to enjoy it while it lasted because the ferry to Jordan (and all its horror stories of massive delays and sea sickness) was up next!
Posted by Unknown at 3:00 AM