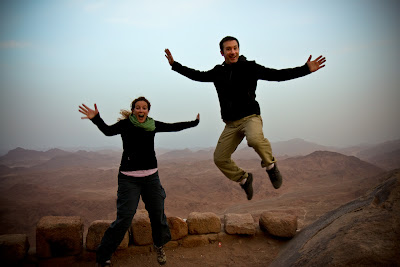 After our "rest" day in Cairo, we went to bed to prepare for an epic bus ride the next day. A 7 hour journey across Egypt to the Sinai peninsula. 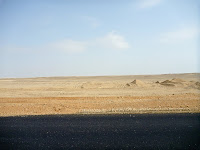 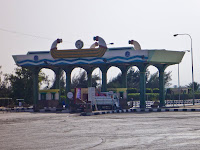 The drive across the open desert of Egypt was uneventful other than a few checkpoints and a stop to see the Suez Canal. However, we did learn the meaning of BFE. In some areas, there was absolutely nothing except desert for as far as you could see. One road and just unforgiving desert.

We also found out that newspapers were a common form of currency across these desert roads. At each checkpoint our driver would pass a newspaper to the guard who would then instantly wave us through and dive into the paper.  Since news sometimes travels at a snails pace in this part of the world, a current newspaper is highly valuable and can go along way to grease the wheels so to say. Some things in life are as simple as that. Oh, and there was nothing else in the newspapers, we asked about that too!  That is a photo of one of the checkpoints close to the Suez canal, notice the boat up top.

After the long drive, we arrived at our hotel and dove straight into a hearty lunch buffet in preparation for our climb of Mt. Sinai. Food – good; hotel room – not so good! The room was nice enough but we saw about a half dozen mosquitoes on the wall of the bathroom when we went in so we knew we’d have a fight on our hands!

After lunch and some digestion time, we all headed out for a late afternoon climb of Mt. Sinai. There was an option to take a camel up 75% of the way, but after feeling like I was about 12 feet in the air on the wobbly camel at the pyramids I wasn’t very interested in taking a camel up a high and winding mountain path! However, about 30 minutes later I was really wishing I had! There is no other way to say it than that 2.5-hour hike up Mt. Sinai sucked. Yeah, and there were 750 steps at the end that really pushed you to your limit (the bottom of the steps was where the camel-riders got dropped off, so at least they had a little pain in getting to the top!). But, I am glad to say that I made it…a bit slowly, but I made it!

Josh was just bouncing up the steps. Ugh. Oh well, not all of us are athletes! Haha!

The view at the top was great; it was overcast but you could still see the vastness of the area.  Sinai is a rough countryside - just a vast rugged part of the world.  We took a great group shot and then had a little fun of our own trying to get a jumping shot on top of Mt. Sinai. I was thinking about just jumping up off the ground but Josh had other ideas… the series of photos tells it best! 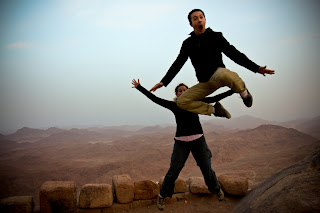 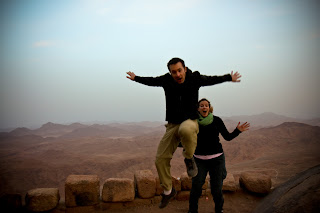 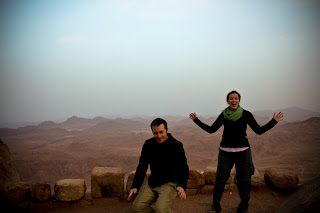 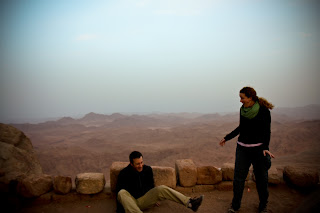 After the photos, happily without injury, we headed back down.  We were hoping to get down the steps before nightfall.  Luckily we brought head torches for just this occasion that took some of the guess work out of going down.  It was easier than going up that's for sure.

We got back to our hotel, had the buffet dinner, then killed about 12 mozzies (hope the neighbors weren’t bothered by Josh slapping his sandals against the walls!) and called it a night. Needless to say, we slept pretty well. I lathered up in mozzie repellent and slept like a baby. Josh didn’t lather up quite as well and heard a few buzzes around his head all night. Fortunately, we survived the mozzies about the best of the group. Most everyone else hadn’t seen them on entry like we had so they didn’t expect them.

The next morning at breakfast we learned a few new things about mosquitoes from our Aussie friends. First, you don’t say mosquito, you say “mozzie”. They have slang for everything, but you have to admit "mozzie" is easier to say! Also, to defend against the midnight mozzie attack it’s best to turn on a fan or air conditioning. They have weak little wings and any wind will usually deter them. Dang, that would have been handy knowledge last night!

After our informative breakfast, we were back on the site seeing trail to St. Catherine’s monastery - home to the infamous burning bush that spoke to Moses. The monastery is only open for visitors on a few specific days so when it’s open it’s packed. Once inside there it was, the burning bush still alive in all its glory. Not what I expected but fairly awe-inspiring. Also inside the monastery was a museum that had some amazing religious pieces including a letter from the prophet Mohammad to St. Katherine. Finally, on our way out, we made a quick stop at the skull room. What is a skull room, you might ask? Apparently, they ran out grave site land, so after people died, they were buried until decomposed then were dug up. All the bones were then put in this room. So, there was a cage of skulls and cages of other random bones. Interesting but weird.

In the heat of the day, we departed from Mt. Sinai and made our way to paradise – Sawa Beach Camp!
Posted by Unknown at 3:00 AM