Temples Outside Luxor – Our Celebrity Status On The Rise 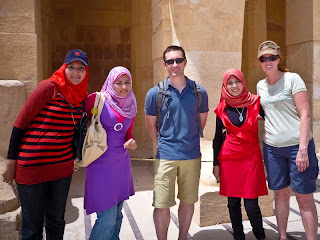 After the Valley, we headed over to visit Hatshepsut’s Temple – the one we saw so clearly from the balloon. She was the only female Pharaoh and made a few people mad in getting to that position. So, unfortunately her temple was heavily defaced.  They just chiseled away any carvings of her and her name. Its a shame but the structure itself was still rather unique!

We also became celebrities again as another group of girls wanted a picture with us. This time we were wise enough to get their pictures as well! Notice the clear divide between the girls and Josh, while the one girl happily put her arm around me!  Its evident that men and women don't associate like were are used to.

After the paparazzi session, we headed back to the bus for yet another temple – Medinet Habu.  Besides being our tour leader Sam's favorite, it's special because the hieroglyphics were so deeply carved. Josh could put his whole fist in some of the holes.  This was a stark change from the small carvings at other temples we'd seen thus far. In fact, you could probably climb the walls using the hieroglyphics as hand and foot holds.  Too bad Sam vetoed that idea because it sure would have made for some good photos. 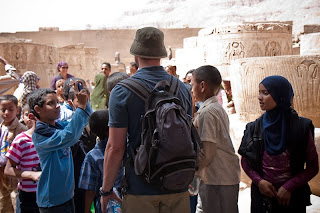 Exploring the temple we ran into a big group of young school children on a field trip.  With one hello Josh was swarmed by the group.  I looked up and he was being mobbed, in a good way, with interested kids shaking hands, saying hello and taking photos of him with their phones.  Luckily I was able to act quickly and get a few photos of him in action.  He was great, greeting everyone of the 30 or so kids, even posing for photos like a pro.  Afterwards he was gushing from the attention.  The fact that all of the kids were so interested to meet him was unbelievable and totally unexpected.

My favorite part was when a young girl, in pink, was trying to take a picture of Josh with her camera phone.  Walking past she was starring at the screen of her phone waiting for the perfect moment, exactly like taking any old picture of a statue in the temple.  Except it was Josh!  Then there was Josh starring back at her smiling just soaking it up.  Our celebrity status was now at an all time high.  We had a few other photos with other temple visitors too before heading for the exit.  Good show!

After the temple tour, we were invited for a lunch feast at our local guide’s home.  It was all home cooked by his wife and was delicious!  When we could eat no more we moved over to the couch seating area to have some tea and hear about local wedding customs from our host.  When ready to marry the man first looks in his family, then looks among neighbors, then among friends or other acquaintances while trying to select a bride.  Remember Men and women just don't associate as freely as we are used to so they will have possibly never met.  Its all well to complicated for this blog but they do throw some big village parties and have a good time celebrating.  Very Interesting none the less.
With lunch over we hit up the obligatory papyrus shop to "see how papyrus was made".  Not wanting the hassle of trying to get a "good price" at a bazaar we picked up few pieces including a blue Egyptian Cat.  Our cats are sure going to be jealous.

This amazing day was nearing an end…but wasn’t over yet!  We used our little bit of free time before our overnight train to Cairo to visit the Luxor Museum.  What a surprise this little gem of a museum turned out to be.  Compared to the The Egyptian museum in Cairo which is dingy, dusty and Egyptian artifact overload, The Luxor Museum was a clean, modern and air conditioned museum with only100 main pieces all exquisitely displayed.  One of the best displays were two ancient Pharaoh mummies.  Its hard to describe how spectacular they were but the bodies were in such good condition, even in orginal linens.  You could see their shriveled toes and fingers and stare in to their leathered face, complete with hair still on the head. Wow.  It’s amazing that even with all we know in the current age, we can’t reproduce this level of mummification!

Can you believe we saw all that in one day?! After such an intense day, we actually slept soundly on the seater train back to Cairo! Whew!
Posted by Unknown at 7:23 PM