Luxor – Techno and the Temples 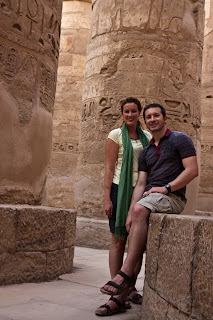 The van ride to Luxor had an entertaining start. Imagine us rolling off the boat shortly after sunrise and breakfast...and some of us being a bit tired after being subjected to snoring on board.... Well, that grumpy morning attitude didn't stick long thanks to our bus driver - DJ Mohammed.

He was a tall portly fellow with a big smile and huge laugh. After the bus doors closed, we found out his taste in music was Arabic techno - good morning! So while weaving, honking, and going around anything in his way that moved (AKA “Egyptian driving”), he blasted his techno music. He would be pumping the volume up and down as if he were scratching 45's in a club and even started pumping the breaks and turning the interior lights on and off! All along letting loose huge bellowing laughs. Even our tour leader Sam, at one point looked back and said "Mohammed is crazy" to which Mohammed responded by screeching the van to a halt, pointing out the door and yelling “Get out”! A lot of laughs later we tore off again towards the Valley of the Kings, music still blasting!

To break up the drive to Luxor we made a stop at Edfu's Temple of Horus, the god of war and hunting. One thing if you didn't know already is that Egypt is full of tombs and temples ( although they think only 30% has been discovered! ).  Little did we know at the time but Edfu is one of the most completely preserved temples in Egypt.  It also has a cool alter shaped like a boat along with what I called the Nile’o’meter. A set of stairs that led to water used to measure the level of the Nile. It was incredibly detailed in its carvings and hieroglyphics – it was a great stop!

Once we arrived to Luxor we went straight for one of the best sights on the tour, Karnak Temple. The pharaohs used this massive temple complex to be remembered in history. Around 30 pharaohs expanded it over the years so it is enormous. The most impressive attraction is a room of columns called Hypostyle Hall installed by our good friend Ramses II. And I’m not talking about a handful of nice skinny columns….I’m talking about massively wide and tall columns. Check out the stats of this impressive space on Wikipedia.

One other cool thing was the scarab statue ( dung beetle statue ).  It is said that if you walk counter-clockwise around it once you get health, twice you get love, three times for wealth and more laps for some other things…we went for health - it was hot, lol!

As we were heading for the exit we ran into a group of Egyptian girls who were getting photographs of their group. I asked if they wanted me to take the picture and they politely allowed me to. Once I broke the ice they were fascinated with us. Among a lot of staring and giggling were at least 10 photographs….with us! Funny enough we were as fascinated with them as they were with us. This actually became the trend over the next few days at temples. You all had no idea we were celebrities, right?!

After a long day we headed into Luxor for a dinner with a view overlooking the Luxor Temple and enjoyed the food but most off all the fresh strawberry juice. It wasn’t far off Grammy’s homemade strawberry preserves in a glass! Delicious!

We had to hit the sack early again that night as we all signed up for a sunrise hot air balloon ride the next morning!!