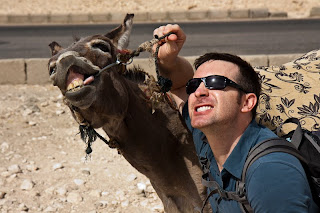 Another early morning saw us up at the crack of dawn to catch our flight – AKA our hot air balloon ride. With very few words being said, we all jumped in the bus and took a short drive down the road where we boarded a small ferry to cross the Nile. Apparently the only bridge was several miles away and they deemed this the easier alternative. The ferry ride was nice and they had a breakfast cake set out for each of us and provided tea or coffee. We quickly took advantage of some Nescafe! A few minutes later we jumped in to another bus to go to a big field on the outskirts of Luxor where a handful of balloons already dotted the morning sky. We had missed sunrise, but that was ok because the morning was clear and beautiful (minus some guy burning something a couple miles away). 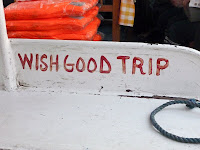 There was a buzz of excitement in the air as we walked up to our balloon (which held 20 people!). It was laid out flat on the ground with the large basket on its side. The balloon crew went to work as soon as the van doors opened, filling the balloon with air via two large fans. Soon enough it was time to start the burners – the initial fire burst grabbed our attention – with a big good morning! It was toasty even from a good distance away. Before we knew it, we were told to jump in – Josh first! He spiritedly jumped up to sit on the edge of the basket. As quickly as he was up, he was back down again falling like a turtle on its back thanks to wearing the backpack and holding the camera in one hand! A little too overeager are we?

Everyone else made it in without a hitch and we took off! It was surreal to be lifting in to the air and see several temples and sights come in to view. Oh, and the heat from the gas burners – yeah, it was hot!

We also saw the Ramesseum temple for Ramesses II and Medinet Habu for Ramesses III, as well as some other random temples and sights. It was also great to float over the little towns and get a birds eye view of the farmers out that morning, the animals and just their general style of living. I had to have a good laugh when I saw a herd of sheep come piling out of a 2 story house! Fortunately, I caught that one on camera! It kind of seemed that the divide between animal and people space was thin. 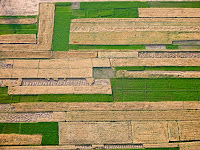 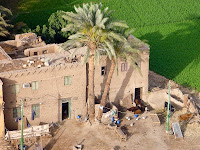 I mentioned already that our flight was longer than normal… well balloons are not quick and easy to land – they are at the mercy of the wind and the crew on ground to grab it and try to hold it down. After a lightning fast 30 minutes we started our descent…slowly, slowly, sinking, slowly, oh that little town is getting close, oh its getting closer and we aren’t going down that fast, oh we might land on that house, oh, oh, and fire! Rise, rise, rise! We cleared the house safely in that failed landing attempt – the wind won that one. We tried again and again had to abort because of another town…and again but aborted due to power lines…and then finally touched down in the desert area. The ground crew grabbed us, we landed softly then kept sliding along the ground and actually had to go back up again and go in for another landing before finally being firmly on the ground! Then it was a frantic effort for the ground crew to get the air out of the balloon so it would stay grounded. Excellent!

Balloon ride over we piled in another van to start our day of touring the Valley of the Kings area. First stop, the Colossi of Memnon, two grand statues of Pharaoh AmenHotep III. The site was busy with quite a few tour buses full of visitors. One of the reason’s we chose Intrepid was because they specialize in getting you off the beaten path to see a really local side of the toured areas. This was a moment where it paid off. All the visitors climbed back on their buses and took off for the Valley of the Kings. We, on the other hand, walked a couple minutes around the corner to find a nice surprise; donkey’s waiting to give us a ride! 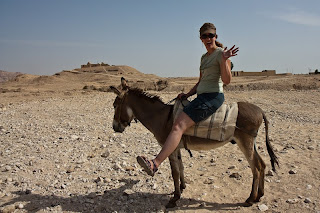 We had been waiting for this since we booked the trip; how often does one get to ride a donkey? One thing we learned about donkeys is that as soon as you hop on they are ready to go! So after mounting our donkeys, which meant struggling to gain our balance, having to kick our legs out side ways, off we went. The ride was a bit wobbly until we got the hang of it but far more comfortable than camels.

We rode on a little dirt road through some farms and countryside that was green only because of the Nile and their extensive irrigation. We greeted the local passers by with “Aasalaamu Aleikum” – with our bad accents, we hope it properly translated to “hello”.

The last few days Josh had been talking about the donkey ride saying he was going to be the fastest of the group. The tour leader Sam took on his challenge and was saying his donkey would never lose to an American donkey. As fate would have it
Josh’s donkey was no slouch and took off from the start, never looking back. In an attempt to catch up Sam got a little carried away and his saddle started slipping. Sure enough off he went! Luckily he landed on his feet because the donkey was temperamental and bucked his back legs as Sam hit the ground. The donkey took off into a field with the saddle around his belly and had to be chased down by a donkey caretaker.

The donkey ride was such good fun. Enjoying the morning in the Egyptian countryside while trying to keep your donkey from stopping for some local fast food (grass), keeping it going where its supposed to go and keeping your balance all at the same time kept a smile on our faces. One of the donkeys was a talker and kept hee-hawing at the other nearby donkeys which only added to the scene because when they talk they are loud – HEE HAW!

After the ride we had a few minutes to take photos and Josh’s donkey smiled for the camera! Those Egyptian donkeys are fun little characters…
Posted by Unknown at 7:35 AM