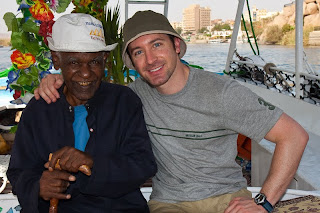 Well I haven’t been able to give many updates. For the first time we opted to for an organized tour with Intrepid to try and get a little further off the beaten track.  However, free time has been limited because of the record pace. There is a lot to come so here goes… 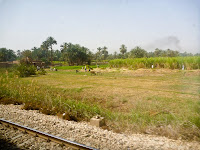 We had a sleeper train from Cairo to Aswan and it was great!  A cool little cabin with two twin beds that folded down and even a sink and mirror station cleverly hidden behind a door.  We had a cabin attendant that promptly served us dinner as the train started moving - perfect timing.  We slept pretty well after I fought with the metal ladder that kept rattling against the wall (I just put it on the floor and decided if I needed down, I would jump...or step on Steph).  In the morning, we woke up to rural scenery and a breakfast of mostly bread (they are heavy on bread at breakfast).

The train pulled into Aswan station and we jumped off now 13hrs further south in the desert. The group needed 3 taxis but instead of driving one after another in an orderly fashion, the taxi drivers, with a little encouragement from me decided to see who could get there first, driving 3 abreast at times and late breaking for speed bumps. Who cares about the luggage on top! One of the fun Arabic words we have learned thus far is Yalla Yalla or “lets go, lets go”. The taxi drivers had fun with this one. Oh and the taxis were fantastic, green striped 70’s station wagons. 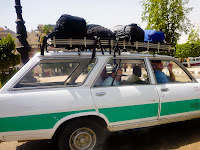 After a quick briefing at the hotel we headed to the waterfront to catch our motorboat tour on the Nile of Elephantine Island. Luckily this was a covered boat because even though it's springtime the heat is still intense. One thing intrepid tries to do is allow you to meet local people at certain times in the trip.   In this case we would be guided on our boat ride by a highly regarded elderly Nubian man.  He's in the picture above.  Although he needed a cane to help himself get around he was sharp as a tack with his wrinkly smile, curved fingernails and lively personality.  He quizzed us about our own countries. A few of the US universities have sent students to be taught by his wisdom. I can’t describe the pleasure it was to meet him as we cruised around the island looking at the sights.

Relaxing sightseeing over it was time to get the heart pumping with a monumental sand dune climb. As we jumped out of the boat our tour leader Sam said, “ “Which route up are you going to take?” Should we take the long route that wound its way up the dune or the short route straight up but half the distance? In hindsight our choice wasn’t best because the short route was an absolute mission! We realized it about half way up bare feet sizzling in the sand and heart jumping out of our chest. For each step up we slid back down half that distance.

However at the top after catching our breath and guzzling some water, we were rewarded with some spectacular views. We could even see the Aswan dam that some may be familiar with. Now the fun part, running back down, legs and arms flailing we hit the bottom where one final treat helped us cool off. A dip in the Nile.  For as hot as it was outside the Nile was surprisingly freezing (but felt good after the climb)!
For dinner we sailed to a Nubian village to have dinner prepared for us by a local family. The food was tasty, cooked in modest kitchen.  See some of the food cooking below.  Gathered around the food, sitting on a huge rug, we feasted until our stomachs were stuffed. The night was capped off with a little traditional music and dance. Steph scored a henna tattoo as well.